In August of 2021, a court in the US ruled that the FCC decision not to review its radio frequency exposure guidelines was “arbitrary, capricious, and not evidence-based.”

In October of 2021, the EU ruled that citizen concern about 5G was “not manifestly abusive, frivolous or vexatious.”

Now, Italian researchers have studied the link between pesticides and EMFs and bee deaths.

Industry and media ridicule and dismissal of EMF concerns are on the wrong side of history.

Bee colonies were set up in a field trial under different conditions.  The multi-stress site showed the worst health condition of the bee colonies, with only one alive at the end of the experimentation out of the four ones present at the beginning.

The study concludes that, “the overall results clearly indicate that the multi-stress conditions were able to induce biochemical, physiological and behavioral alterations which severely threatened bee colony survival.”In regards to colony collapse disorder (CCD), the researchers conclude that, “overall, the loss of three out of four families in the multi-stress site confirmed the role of the multi-stress conditions as the mechanism able to cause the phenomena of hive depopulation (CCD). – Environmental Health Trust

Increasingly, with the forced imposition of increased RF exposures, citizens worldwide are concerned that earth itself is becoming a “multi-stress site” affecting human health and the environment.

Do current standards for wireless radiation adequately protect our families?

Not according to Uloma Igara Uche and Olga Naidenko, writing in the July issue of the journal Environmental Health. In their paper, the authors analysed data from two large, long-term animal experiments—one by the US National Toxicology Program (NTP) and the other by Italy’s Ramazzini Institute. The NTP study found that rodents exposed to wireless radiation prenatally and long-term (for two years) had increased rates of cardiac, genetic and cancerous damage. The Ramazzini study found that rats exposed for their entire lifetime (prenatally and to death) had higher rates of schwannomas of the heart.

The results showed that current US standards are not sufficiently protective.

The limits Uche and Olga V Naidenko derived are very much lower and are given as Specific Absorption Rates (SARs), i.e., how much radiation is absorbed by tissues.

For adults, they arrived at a limit of 2 to 4 milliWatts per kg (mW/kg), 20 to 40 times lower than the existing US limit and less than international limits of the International Commission on NonIonizing Radiation Protection (ICNIRP), followed by Australia.

‘Both technology changes and behavior chances may be necessary to achieve these lower exposure levels. Simple actions, such as keeping the wireless devices farther away from the body, offer an immediate way to decrease RFR [radiofrequency radiation] exposure for the user.’

From the European Union: Today, the European Commission decided to register a European Citizens’ Initiative (ECI) entitled ‘Stop (((5G))) – Stay Connected but Protected’. The organisers of the initiative call on the Commission to propose legislation to better protect all forms of life from certain alleged risks of radiofrequency electromagnetic fields and microwave radiation, to protect against certain other alleged environmental impacts of 5G and related digitalisation, and to ensure effective protection, including against cybercrime, of personal data processed with these new forms of communication technology. 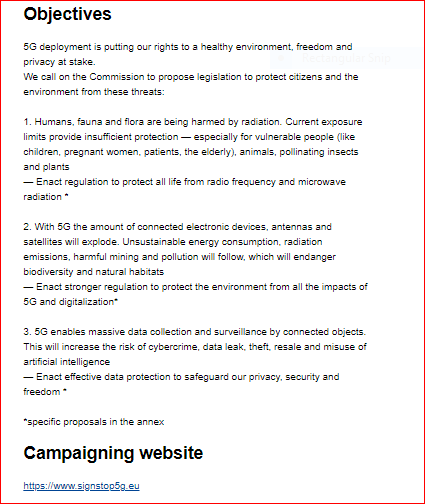 Following today’s registration, the organisers can start the process of collecting signatures. If an ECI receives 1 million statements of support within 1 year from at least 7 different Member States, the Commission will have to examine its content in detail and react. The Commission could decide either to follow the request or not, and in both instances would be required to explain its reasoning.

(Background: The European Citizens’ Initiative was introduced with the Lisbon Treaty as an agenda-setting tool in the hands of citizens. It was officially launched in April 2012. Once formally registered, a European Citizens’ Initiative allows 1 million citizens from at least seven EU Member States to invite the European Commission to propose legal acts in areas where it has the power to act. The conditions for admissibility are: (1) the proposed action does not manifestly fall outside the framework of the Commission’s powers to submit a proposal for a legal act, (2) it is not manifestly abusive, frivolous or vexatious and (3) it is not manifestly contrary to the values of the Union.)

Objectives of the Petition

5G deployment is putting our rights to a healthy environment, freedom and privacy at stake.

We call on the Commission to propose legislation to protect citizens and the environment from these threats:

Annex: Enact Regulation To Protect All Life From Radio Frequency And Microwave Radiation

Hundreds of peer-reviewed scientific studies independent from industry including the most recent research prove radiofrequency electromagnetic fields (RF EMF) have harmful bioeffects at intensities millions of times lower than current limits. We demand the application of the precautionary principle to RF EMF in order to protect against risks to the environment and human health

“Traction On 5G Cell Tower Fight- Shacktown Neighborhood, Pittsfield, MA”  –  the tower that sprung up in a neighborhood during covid

Gaining traction on achieving healthier standards for cell tower sitings: progress in Shacktown to move the cell tower casting a shadow on a residential neighborhood, taking a pause on a project at the Curtis building In Lenox. Dr. Kent Chamberlin talks about his work for a commission making recommendations for state legislation in New Hampshire, and how it is becoming a model for other states, Courtney Gilardi updates on the recent meetings with the Pittsfield Board of Health and talks with Verizon. Let’s move that tower.