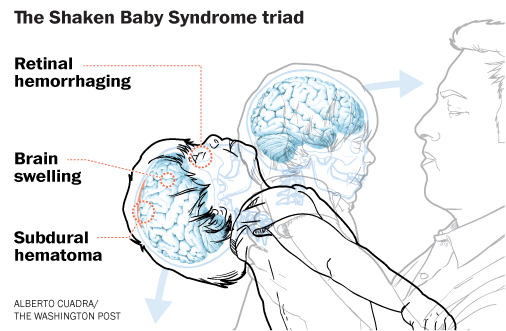 My name is Jim Meehan, MD. I am an ophthalmologist and former associate editor of the Journal of Ocular Immunology and Inflammation. During my work with the journal I reviewed two papers seeking publication of research reporting an association between the MMR vaccine and retinal vasculitis in children. The research framed a compelling case for the association of recent vaccination with Merck’s MMR vaccine and a type of bleeding in the back of children’s eyes that to this day is considered a cardinal sign for traumatic child abuse.

Despite my support for the publication of the research, I was not surprised when the papers were rejected.

Retinal hemorrhaging can be caused by a vasculitic reaction, an inflammatory reaction in the blood vessels of the retina. The inflammation can be so pronounced that it results in leaking and bleeding of the blood vessels of the retina. This bleeding can be seen on funduscopic examination of the retina (the back of the eye). The pattern of bleeding can appear as “dot-blot hemorrhages,” which, when it’s seen in a child, is taught to be pathognomonic, or a cardinal sign, of child abuse, called Shaken-Baby-Syndrome (SBS). Interestingly, I don’t recall ever being taught to consider adult abuse when I see it in a patient with similar retinal findings. No, in an adult the most common causes are diabetes mellitus, hypertension, vascular occlusive disease, or autoimmune disease.

Nevertheless, there is a large body of compelling ophthalmologic research that supports retinal hemorrhages in a child as a cardinal sign of abuse. Believe me, I’ve read and considered all of it. There’s just this gnawing doubt that we’ve missed something and made up a great story that seems to neatly explain everything. Accept for me and my experience it doesn’t. And like any good scientist I won’t consider the “science settled.”

I was in my ophthalmology residency training at the time I edited for the journal. At that time, I was still well indoctrinated in the medical orthodoxy of vaccines and vaccine safety. Nevertheless, personal experiences as a first year ophthalmology resident physician had made me skeptical of child abuse as the only possible cause of the retinal bleeding in the babies brought to the ER by their parents.

I was consulted on several cases presumed to be child abuse that presented themselves to the Barnes-Jewish Hospital ER. In these cases I examined the child, their retinas, and interviewed the parents. I never encountered a case in which there was any combination of evidence or testimony that made me think child abuse was a probable cause. However, the “babies with dot-blot hemorrhages are victims of child abuse” is the dogma that the medical orthodoxy teaches, therefore, a diagnosis of retinal hemorrhages in an infant is almost guaranteed to result in a parent or caregiver being presumed guilty.

I clearly recall one such case of retinal hemorrhages presumed to be SBS, in which I argued against the diagnosis because there were no other injuries. Specifically, there were no bruises where the child would have allegedly been held and shaken.

I had a strong background in mechanical engineering taught to me by one of the best engineering schools on the planet, the United States Military Academy at West Point. To my mind, it was beyond improbable that a child could be shaken hard enough to induce shear forces in the vascular layers of the retinal and there NOT be other injuries or evidence on physical exam. My attending physician, a pediatric ophthalmologist and department head, treated me like I had to be an idiot to consider any other diagnosis. Therefore, the diagnosis stood.

I can only assume that charges of child abuse were filed, CPS was called, and a family was broken, because that is what happens when retinal hemorrhages are observed in children.

If I knew then what I know now.

A few years ago I was drawn back into the vaccine safety controversy when the news of the #CDCwhistleblower, William Thompson, PhD, hit the major media. Dr. Thompson, a lead CDC scientist on THE seminal study published in the Journal of Pediatrics in 2004 investigating the safety of Merck’s MMR vaccine and its association with autism, came forward and admitted the study was fraudulent. Out of his guilt and shame, Dr. Thompson admitted that the he and his fellow CDC coauthors secretly colluded to change the study analysis plan, manipulate data sets, destroy documents, and publish a fraudulent paper that hid the fact that the CDC’s own investigation found strong associations between Merck’s MMR vaccine and autism.

For an excellent presentation on the CDC whistleblower story and the fraud at the CDC, please watch the documentary Vaxxed: From Coverup to Catastrophe.

I remembered those studies from 14 years prior and the fact that at least two unrelated independent research centers had found an association of retinal hemorrhages in children with Merck’s MMR vaccine. I started asking the questions that any good physician and scientist asks in these situations; the questions that have to be asked if we are going to find the truth. The more questions I asked the more I was opposed by blind orthodoxy, unbelievable rationalizations, and unreasonable arguments. You know, the kind of stuff that allowed experiments on Jewish prisoners in Auschwitz, the Tuskegee airmen, tobacco smokers, and patients treated with dangerously addictive and destructive drugs like OxyCodone, Xanax, Soma, and Adderall.

Flawed Convictions: “Shaken Baby Syndrome” and the Inertia of Injustice

I learned that I wasn’t the only one to ever question both the medical orthodoxy and the mechanism of injury in SBS:

Despite the powerful medical orthodoxy that teaches otherwise, I am convinced that many cases of retinal hemorrhaging in babies are not caused by the unlikely, arguably improbable, mechanisms of shaking, but by the far more insidious generalized vascular inflammation that occurs when the physiology of a susceptible child’s blood vessels reacts to a vaccine. In fact, on 5/16/2017 Merck added two vasculitic diseases of childhood as adverse events to the package insert for the MMR vaccine(3). So, now we have more evidence that the FDA and Merck both acknowledge that the MMR vaccine can cause exactly the kind of vasculitic pathology capable of producing retinal and brain hemorrhages.

We should also consider how the elements and admission of parental frustration that can sometimes be elicited in these cases. Consider the symptoms of the bleeding vasculitis causing an inconsolable, screaming child, in such pain from the cerebral swelling. A scenarios that might drive any parent to the point of exhaustion and frustration.

I believe that the clinical research studies that a medical journal decided not to publish so many years ago, might have actually been pointing to an important truth. Unfortunately, because that truth was not “the“ truth fully accepted by the medical orthodoxy, the research got passed over. Instead of new science and observations that challenged long held beliefs, we simply had another example of how, because we considered the “science settled,” we continued, repeatedly, for years, to misdiagnose, fail to identify possible, perhaps more probable, causes and sent innocent parents to jail. Now, we need to stop, slow down, reinvestigate, reconsider, open our minds and make sure we haven’t missed identifying potential underlying causes, figure out how to prevent them, and if the problem is vaccine injury, hold the vaccine manufacturers accountable for the injuries they’re products have caused.

Except that with vaccines we can’t hold the manufacturers accountable. Because we made the horrible mistake in 1986 to give vaccine manufacturers, whose products were even then causing so much injury, immunity to product liability lawsuits. Which is the reason that in early 2000 a young ophthalmology resident was reading research suggesting that Merck’s MMR vaccine was associated with retinal hemorrhages at the same time scientists at the CDC were committing fraud to hide the association of the very same vaccine with autism.

In conclusion, I believe what doctors are being taught about what is supposed to be one of the most characteristic signs of child abuse, retinal “dot-blot” hemorrhages in a child, is not such “settled science” that we can afford to stop considering other possible causes and diagnoses. What if retinal hemorrhages in a child aren’t so pathognomonic for child abuse? What if it’s also a sign of vaccine injury but we don’t know because we aren’t considering, asking, or looking? What if we aren’t asking the right questions and conducting the right research because you can’t get your research funded if it doesn’t advance the pharmaceutical industry’s agenda? It’s time that doctors, scientists, and concerned people everywhere reopen the case against vaccines and demand absolute transparency, gold standard clinical testing, and scientific oversight that is neither dependent on, nor corrupted by, Big Pharma’s money.

Author’s Note: I am aware of Binenbaum’s work on this topic, as I am the limitations of that work. For example, it does not escape my notice that Binenbaum shares the University of Pennsylvania with Paul Offit, MD.

This article appeared first here and is published on Natural Blaze with permission.