Cinnamon is a popular spice that has been used for its healing powers for centuries.  Modern science is beginning to look more closely at potential cinnamon health benefits for oral infections, gastrointestinal issues, and skin diseases, among others. Its active compounds—cinnamaldehyde, cinnamic acid, and cinnamate—appear to give it a leg up on most other spices, and cinnamon’s nutrition facts surely won’t disappoint.

The invigorating taste of cinnamon appeals to most, and adds a distinguished flavor to virtually anything. It’s a popular gum flavor and addition to cocktails, and can be rolled into sticks or sprinkled on oats, fruit, and bread in powder form to give them some extra kick.

It’s also been identified as a potent source of antioxidants, featuring anti-inflammatory, anti-microbial, anti-diabetic, anti-diarrheal, and anti-cancer properties while also promoting a healthy heart. All of these cinnamon benefits can contribute to improved health.

The two most popular types of cinnamon (which comes from cinnamon bark) are Ceylon and Chinese. Ceylon cinnamon is slightly sweeter and more refined, yet it seems to be the variety that’s most well studied.

Cinnamon features a number of beneficial nutrients and can fit easily and wonderfully into a healthy diet. Serving sizes up to six grams per day have shown to have benefits, which you can experience with as little as one gram.

The below nutrition information is based on a 100-gram serving, which is an amount larger than most will ever eat. People typically take in about a teaspoon. That said, the 100-gram serving is used to compare it to other spices.

Based on this amount, cinnamon is a great source (offering at least 20% of the recommended daily amount [RDA]) of:

Furthermore, the spice is rich in fiber while relatively low in calories, sugars, and fat.  The biggest benefits of cinnamon are from its polyphenols, which are plant-based micronutrients that seem to be accessible in small amounts. 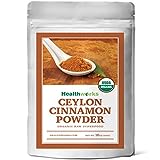 If you don’t like the taste of cinnamon, you can supplement. For others, cinnamon sticks or ground cinnamon can be added to virtually anything.

There are plenty of health benefits associated with cinnamon. Uses range very widely because of its antioxidant and anti-microbial compounds; however, much of the research on the benefits of cinnamon still requires testing on human populations.

Oxidative stress caused by free radicals can lead to illness and disease, and these antioxidant effects help to maintain the health and integrity of cells.

The active antioxidants found in cinnamon are from the polyphenol family, and in a comparative study of 26 spices, cinnamon featured the highest amount—even more than heavy hitters like garlic and oregano.

Although a certain degree of inflammation is required as part of a healthy immune system, chronic inflammation can wreak havoc on your health.

Cinnamon’s ability to act as an anti-inflammatory could help manage or prevent a long list of diseases that have chronic inflammation at their root.

These include diseases like heart disease, diabetes, certain cancers, arthritis, and more.

In emergency situations, such as when you cut yourself, you want your blood to clot so that you don’t bleed out. But blood can also clot internally, and when it does, it can lead to poor circulation, heart problems, and an increase in the risk of a cardiac event.

Cinnamaldehyde, also called cinnamic aldehyde, is a compound in cinnamon that may have an anti-clotting benefit. Studies have shown that it may limit the release of arachidonic acid, which can limit clotting.

This may partly indicate why cinnamon is a powerful anti-inflammatory.

Studies in individuals with diabetes and prediabetes have shown that cinnamon can have a significant impact on blood pressure, thus reducing the risk for heart disease or heart attack.

One study showed that it lowered systolic and diastolic blood pressure by 5.39 mmHg (millimeters of mercury) and 2.6 mmHg, respectively.

This result was based on short-term consumption and is believed to be a result of cinnamon acting as a vasodilator, relaxing arteries and veins so that blood moves more easily.

It’s possible that cinnamon triggers the production of nitric oxide (NO), which initiates vasodilation.

Patients with type 2 diabetes or prediabetes may benefit from including between one and six grams of cinnamon in their diet per day.

Cinnamon’s anti-inflammatory effects may also help to reduce the risk of cardiovascular disease (CVD), a common condition among diabetics. There is even some evidence suggesting that it can improve glucose control and insulin secretion.

Cinnamon may be useful for treating both internal and external infections due to its anti-microbial, antifungal, and antibacterial compounds. There is some lab evidence that it may be particularly useful in fighting staph infections and Candida albicans(yeast infection).

A study published in the Journal of Traditional Chinese Medicine showed that cinnamon oil damaged and destroyed the ends of yeast cells, ultimately leading to their death.

It may be a unique way that cinnamon benefits women and men—as an alternative for battling yeast infections in as little as 72 hours.

Cinnamon has been used as a natural food preservative because of its unique ability to kill dangerous bacteria. It is especially effective at taking down E.coli, a major cause of food-borne illness.

Cassia cinnamon seems to be the most effective at fighting bacteria, and is particularly useful in combating E.coli, staphylococcus (staph infection), salmonella, and candida species.

8. May Help with Neurological Disorders

Studies on mice have shown that cinnamon may have the ability to reverse the physiological changes associated with neurological diseases like Parkinson’s disease.

Using Ceylon cinnamon, the study found that after oral feeding, ground cinnamon is metabolized to sodium benzoate before entering the brain. This led to improved neurotransmitter levels, the protection of neurons, and enhanced motor function.

Although a clinical trial is needed to see if humans experience the same effects, it could be a major breakthrough for the 1.2 million patients with Parkinson’s in North America. 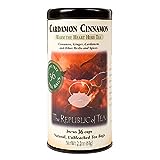 Sure, a stick of cinnamon gum makes your mouth feel refreshed, and cinnamon-flavored anything provides some pleasure for your taste buds. However, its benefits for your mouth may extend beyond the superficial.

Test tube studies have shown that the antibacterial and anti-microbial properties of cinnamon may reduce the risk of cavities and fight the formation of harmful plaque build-up.

It should be noted that these results are based on a comparison to clove oil, wherein cinnamon oil was better for oral health. So, it might not be the best idea to swap your toothpaste for cinnamon!

That said, cinnamon oil is reportedly effective in battling 10 species of cavity-causing bacteria.

Because of its ability to produce nitric oxide and its anti-inflammatory effects, cinnamon could be a useful tool in protecting heart health.

Studies in diabetics have shown that it can improve cholesterol profile and lower blood pressure, which add further reinforcement for its potential in this area.

Other studies have indicated improvements in cholesterol levels, particularly LDL, which is associated with high blood pressure.

All in all, cinnamon seems to be effective at keeping your heart healthy, but it shouldn’t be your primary focus when it comes to heart health. 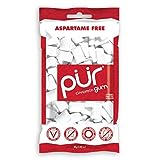 The anti-inflammatory effects of cinnamon may work to reduce symptoms associated with allergic reactions.

This is another area where more research is needed to establish efficacy, but it could be yet another reason why you might want to think about adding a little more cinnamon to your diet.

12. May Reduce the Risk of Cancer

Studies have shown that the antioxidant compounds in cinnamon may be able to thwart the growth of cancerous tumors.

There is some evidence suggesting that it may be particularly helpful with colon cancer, but human trials are yet to take place or be published.

13. May Help to Alleviate Digestive Discomfort

Cinnamon bark oil has been used in Ayurvedic medicine to treat indigestion and flatulence for a very long time.

The belief is that its warmth leads to better blood flow, thereby boosting the availability of oxygenated, nutrient-dense blood to fight illness. Based on what has been noted with regard to cinnamon’s impact on vasodilation, this doesn’t seem far-fetched!

If you’re feeling bloated or gassy, a cup of warm cinnamon tea may help. Use ground cinnamon.

Other Potential Benefits of Cinnamon

I would definitely stop short of saying that cinnamon is a cure for any of the conditions mentioned above, largely because so many of cinnamon’s benefits have yet to be studied outside of lab or animal models.

What happens in a test tube, mouse, or guinea pig can be very different than what might happen in a human body. Still, cinnamon is so rich in beneficial nutrients and antioxidants that including it in your day (in one way or another) is likely to impact inflammation and protect your cells.

Some other areas where cinnamon has shown to have some benefit—in animal and test tube experiments—include:

If there’s one word I strongly avoid, it’s “superfood.” Yet, according to the lengthy list of potential health benefits served up by cinnamon, it certainly seems to fit the category.

But it’s important to remember that no single food or spice can single-handedly protect you from illness or improve your health. Adding a dash of cinnamon to a bowl of ice cream or sugar-laden specialty coffee won’t necessarily negate the impacts to your heart, cholesterol level, or diabetes risk.

Nutrition works synergistically, and it’s important to keep that in mind whenever reading about the benefits of particular spices or foods.

Therefore, before running to the store to buy some cinnamon sticks or gum, take a look at your overall nutrition and consider how it could be helping or hindering your health.

This article first appeared at Doctors Health Press and appears on Natural Blaze with permission.

Explore our many articles on the Benefits of Turmeric!