In March 2015, a Danish national television station (TV2) aired a documentary focusing on girls who suspected they had been injured by the HPV vaccine Gardasil. Immediately after the airing of the show, girls with similar experiences started coming out of the woodwork. Virtually all of the girls had the same story to tell.

They began to have serious new medical conditions shortly after using Gardasil, so they would go to the doctor. According to Luise Juellund, the vast majority of doctors would tell them the HPV vaccine has no serious side effects and offer psychological problems as an alternative reason for the new symptoms.


Luise should know, her daughter is one of the seriously injured and cannot be left home alone because of daily seizures and hour-long periods of unconsciousness. After disclosing the new symptoms she was experiencing after Gardasil, she was referred for psychological evaluation. Psychiatrists cleared her and she has now been diagnosed with POTS (postural orthostatic tachycardia syndrome) a suspected side effect of HPV vaccines.

According to Peter la Cour, Head of the Center for Functional Disorders in Copenhagen, the practice of refusing girls the opportunity for medical examination and treatment on the grounds that psychological problems can cause similar symptoms is terrible. He states:

The handful of girls I’ve seen has not been mentally ill, but very physically sick and disabled. We simply cannot have sick people rejected under the assumption that they are mentally ill. None of us know anything about why they are so sick. Alleged knowledge of psychological reasons is scandalous character assassination of the young women.

Serious Adverse Reactions Reach One in 500

Denmark is divided into five healthcare regions. On June 1, the government established a single point of entrance in each one of these regions to accept and examine anyone suspected of having a negative reaction to Gardasil. The response was overwhelming.

The influx of girls seeking care was 60% higher than expected, suggesting the harmful effects was greater than Danish health authorities had foreseen. By June 9th, the waiting list to be evaluated was at least six to nine months long. (See map below.) Two of the five centers did not know how long the girls would have to wait.

Jesper Mehlsen from Synkopecenteret at Frederiksberg Hospital is one of the specialists who takes care of the girls. He stated:

We thought it (the serious adverse event rate) was about one in 10,000 people who had side effects. Now it turns out that there are at least two per 10 000. Suddenly it was doubled. 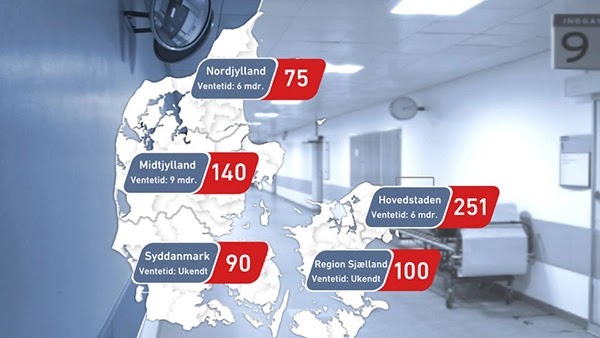 Unfortunately, the avalanche of girls seeking medical diagnoses and treatment after their HPV vaccinations continued to increase.

Only two days later, on June 11th, Dr. Jesper Mehlsen had to revise his estimate of the number of injured girls stating:

Dr. Mehlsen helped to research the HPV vaccine and personally vaccinated 3,000 girls. Now, he operates the regional intake center in Frederiksberg and will be in charge of coordinating work across the country. He noted that as of June 11th, 360 girls had been referred for study.

Dr. Stig Gerdes fears this is only the tip of the iceberg. He stated:

It will not it surprise me if we end up reaching several thousand who have been sick. I even stopped administering Gardasil a few years ago, after vaccinating about 100 patients.

More than a handful of them became ill after the vaccine. Several of them very, very seriously and completely devastated.

Is HPV vaccine safety based on mere guesswork?

Danish Health Minister, Nick Haekkerup, and the National Board of Health continue to defend the use of the HPV vaccine Gardasil despite the more than 600 young girls suspected of becoming seriously ill from the vaccine. Both still claim the vaccine is safe and the benefits outweigh the risks.

Experts who are working with the injured girls disagree. Coordinator of the Danish Society of Obstetrics and Gynecology’s national guidelines for HPV vaccination, Gynecologist Jeppe Schroll states:

We can simply not say because we do not know. There is so much uncertainty in the studies that were made on the vaccine – so it is a pure guess. It may well be that they (the health authorities) are right, but it could just as well be the opposite.

His opinion is reinforced by Dr. Diane Harper, who helped develop Gardasil for Merck and stated:

There is no data to substantiate that the benefits outweigh the risks. The truth is that we know very little about the side effects of the HPV vaccine.

Dr. Schroll suggests that Merck’s own analysis of possible serious side effects is based on a questionnaire which clinical trial participants completed two weeks after the vaccine was given. In the years since, women are asked whether they have received “new medical conditions.”

According to Dr. Schroll, this provides a high degree of uncertainty. Some may get sick during the first 14 days, but women who become ill later may not connect it to the vaccine.

Dr. Schroll stated another source of error is that in the last major Danish/Swedish study among a million girls only looked at those with a diagnosis; not necessarily those with a list of symptoms such as debilitating paralysis of the arms and legs, pain, chronic fatigue, sudden daily fainting, daily migraines and dizziness – like the more than 600 Danish girls currently referred for evaluation.

According to Dr. Jeppe Schroll:

Danish GP’s believe one should examine the many sick girls who are suspected to have had adverse reactions to Gardasil before even considering implementing Gardasil 9.

Deputy Chairman of the PLO and member of the Board of Health’s vaccination committee, Niels Urich Holm agrees, stating:

We know too little about the side effects. We fear first, that it (Gardasil 9) might have more side effects than the current one (Gardasil), which has greater side effects than other vaccines. And secondly, we believe that it would be prudent to await the investigations currently going on in all regions to find out about the disease and symptoms we have seen in a number of girls, maybe caused by the vaccine. Therefore, one should wait to introduce the new HPV vaccine, which is being approved for use in Denmark until the five new regional HPV centers have studied the sick girls who received the current vaccine properly.

SF (Socialist People’s Party) spokesperson Ozlem Cekic also backed up the GP’s request that the cautionary principle be applied when she stated:

I do not understand why the National Board of Health is so eager to launch a new HPV vaccine. I think overall that the Agency has behaved foolishly in this case, where they have been too slow to react. We can see that many girls may have become ill by severe side effects. It shall be fully investigated.

She also stated that the Socialist People’s Party will take HPV vaccine issues up politically after the election and shall require deeper insight into the documentation underlying the vaccine.

Health Rapporteur Liselott Blixt of the Danish People’s Party was one of the people who led the effort to get the HPV vaccine Gardasil introduced in Denmark in 2008. She now wants it abolished. She states:

The fact that we have so many, perhaps up to 5,000 young women who suddenly become so sick must have the consequence that we simply stop the vaccine. I was the first who said a big ‘yes’ to it, but now I will also be the first to abolish it, because we politicians must take responsibility for ensuring that we have adopted it. Not least in light of the fact that we do not actually have any treatment options to offer the most sick.

Let’s hope the authorities in Denmark follow expert advice and make sure that young women’s health is no longer sacrificed for the promise of a benefit fifteen to twenty years from now.

No healthy young woman should have to sacrifice her health to see if a cancer prevention experiment will work!

Norma Erickson is the President of SaneVax Inc., where this article first appeared.