Why Joe Rogan’s Interviews on Mass Psychosis “Broke The Internet” explains that on the Highwire show EPISODE 249: BREAKING MASS PSYCHOSIS on 1/7/22, host Del Bigtree explained that Dr. Peter McCullough on 12/18/21 and Dr. Robert Malone (inventor of the mRNA technology which he feels was misused in the COVID shots) on 1/3/22 discussed Prof. Mathias Desmet’s concept of “Mass Psychosis.” That sent people searching for information on how COVID has been used to drive Americans crazy with fear. 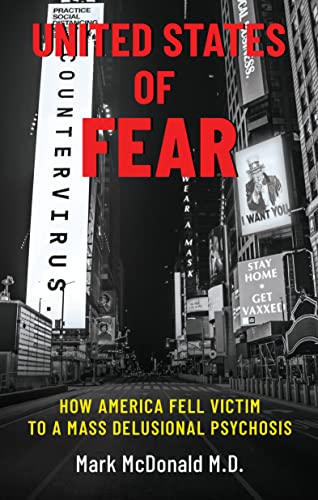 Del explained that in WHAT IS MASS FORMATION PSYCHOSIS? IS THE PUBLIC BEING GASLIT?, Kim Iversen showed on 1/5/21 that the term “Mass Formation Psychosis” trended on so many searches over the weekend that it “broke the internet”! When Google censored the information, she went to DuckDuckGo and found that the term came from Joe Rogan’s December 31 interview with Dr. Malone. See Why Doesn’t Google Want You to Know About ‘Mass Formation Psychosis’?

Joe Rogan – The One Year Anniversary Adrianne Rickson is a Professor in the Criminal Justice Department at Hudson Valley Community College.

Dr. Malone said in his Substack on December 31:

Yesterday, I became aware of a teacher in New York state who was fired because she dared to use the Malone/Rogan video as a teaching tool for her criminal justice class.

Adrianne Rickson, who has a phenomenal track record as an educator, was fired from her teaching job for having the temerity to provide students an extra credit option involving listening to my interview with Rogan. That assignment included a list of fundamentally important questions for the students to consider. The case went up to the Commissioner of Education and the New York State Education Department Office of Counsel, who demanded her reinstatement with back pay. Rumor has it that district refuses to follow the order…

Censorship is alive and well in America.

This brave educator makes me both incredibly sad and proud. Sad for what has happened to her and to the country that I love. Did the school district leadership never read “Brave New World”, “1984” or “The Death of Socrates”? But she also makes me so proud that there are still people in America who are willing to put it all on the line, to do what is right.

So, here is an intellectual leader who has given up her career, in a position that she is clearly exceptional at, insisting that academic freedom be paramount to the teaching endeavor. In fact, her students continue to advocate for her.

This is what some of her students have written about her:

“An amazing educator and advocate for students!”;

“Mrs. Rickson was the most amazing teacher I had … she motivated me and helped me be a better version of myself and … totally turned my life around”;

“Mrs. Rickson has been my teacher for the last year and a half.  I couldn’t ask for a better teacher.… Her class is the only class I have ever had where we are all a family”; and

“Mrs. Rickson is a motivational educator in a field that is in need of caring, competent individuals like her.  She inspires her students to do their best … She is an asset and BOCES is lucky to have her as a teacher there.”

I do wish I could find a way to thank Ms. Rickson for standing up for academic freedom, and if there is any way I can help her in this battle, I am more than happy to do so. Hopefully this essay will provide some modicum of support and encouragement for her courage and cause.

Scientist and mRNA vaccine researcher Dr. Robert Malone went viral on Twitter after he claimed that a teacher in New York was fired for giving students an extra credit assignment.

The assignment, Malone wrote, was to listen to his interview with podcaster Joe Rogan.

“Crazy times… A teacher in NY was fired for having students listen to my interview with Rogan in an extra credit assignment. Commissioner of education demanded reinstatement with back pay, and evidently the district refuses to follow the order.”

Along with his Twitter post, which went viral with over 7,000 likes, Malone also shared a link to an appeal from the New York State Education Department’s website.

The appeal referenced an assignment that asked students a series of questions about a “podcast” involving Malone, who became controversial in late 2021 and 2022 for pushing back on government narratives around COVID-19 vaccinations and the liberal media’s response to the pandemic.  “Why was he banned from Twitter?” one question asked, apparently referencing Malone’s ejection from Twitter in Dec. 2021.  Another question prompted students about whether their “constitutional rights are being upheld or violated.”

The respondent claimed that this assignment “had no valid curricular purpose” and was actually a “misuse” of the teacher’s authority that would pressure students into believing “misinformation.”  But some students went on the record to say that the teacher who gave the assignment, Adrianne Rickson, was an “amazing educator and advocate for students.”

Another comment detailed the teacher’s impact on that student’s life:

“Mrs. Rickson was the most amazing teacher I had … she motivated me and helped me be a better version of myself and … totally turned my life around.” While the appeal does not mention “Joe Rogan” specifically, Malone made headlines in Dec. 2021 after he appeared on Rogan’s show and discussed “mass formation psychosis” and what he called public hysteria over COVID-19 and vaccinations. That interview was later taken off of YouTube and widely censored on the internet, with Malone himself being banned from Linkedin and Twitter.  Billionaire Elon Musk reinstated Malone’s account on Twitter earlier this month.

Malone currently has over 819,000 followers and counting, and is a self-described “skeptic” of mRNA vaccines, according to his profile.  In one of his final tweets before being banned off Twitter in Dec. 2021, Malone shared a link to a video from the Canadian COVID Care Alliance titled, “The Inoculations For COVID-19 – More Harm Than Good – VIDEO.”