“Vandana Shiva is an Indian scholar, environmental activist, physicist, food sovereignty advocate, and anti-globalization author. Based in Delhi, Shiva has written more than 20 books. Shiva founded the Research Foundation for Science, Technology, and Natural Resource Policy (RFSTN), an organization devoted to developing sustainable methods of agriculture, in 1982. She has traveled the world spreading a powerful message of oneness and interconnectedness.”

Afterskool Video: DIVIDE & RULE – The Plan of The 1% to Make You DISPOSABLE – Vandana Shiva

In a 12-minute video by AfterSkool, Vandana Shiva explains “Divide and Rule” and the “Duty of Truth.”

“Humanity has been hijacked by corporate greed, corrupt politicians & anti-human globalists who aim to control, rather than inform.“

Vandana Shiva explains, “We’re at an unprecedented point in history when the “civilizing mission for humanity” is technology — technology owned by the 1%. It’s an illusion, however, that technology companies are “creating” or inventing these systems that will supposedly make our world a better place.”

“The solution to true sustainability doesn’t lie with new technology but in relying on the natural “technology” that is the universe.”

Big Tech Posits Itself as Inventors, When It Exploits

“They extract,” Shiva says, “They don’t create anything … software programmers create the platforms that they use. Even Bill Gates didn’t really write his basic program. It was two math professors in Dartmouth College.”

“She uses Gates’ Ag One as an example, which is basically the idea to make one type of agriculture for the whole world, which will be owned and controlled by Gates from the top down. It’s headquartered in St. Louis, Missouri, where Monsanto, acquired by Bayer in 2018 is also headquartered.

“This includes digital farming, in which farmers are surveilled and mined for their agricultural data, which is then repackaged and sold back to them. There are parallels throughout society. Shiva explains:

“We watched what’s going on in India and we pieced it together. So basically he’s financing a lot of data mining from farmers, which will then be packaged as Big Data and sold back to farmers. This is exactly what happened in your 2016 elections. Facebook sold data to Cambridge Analytica.”

[ ] ”it’s very important to remember that in these 25 years of corporate deregulation of commerce you basically have a lot of money in the hands of very few people.

And they then are the ones investing in all the companies. The companies are not independent companies anymore. They’re basically billionaire money managed by the investment funds like Blackrock and Vanguard.”

Vandana Shiva asks “What economic policies are pushed when the people are divided?”

“The refusal to cooperate with unjust law was termed a duty of truth by Gandhi.”

“This is the time to make oneness and interconnectedness, as one humanity on one planet, the political project of our time. We have to remember we are one humanity. We are part of one Earth, and whatever we do we will not let this basic recognition divide us, either from the Earth or from each other … together we are strong.” 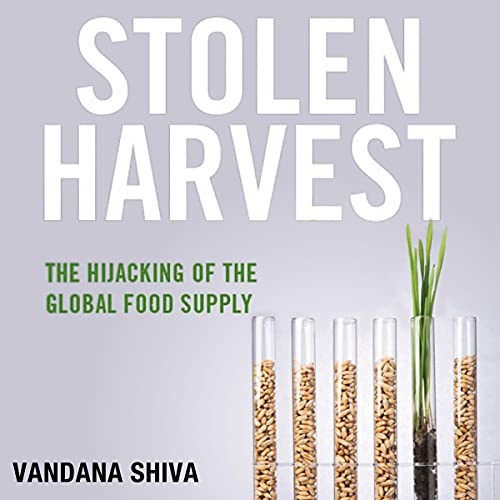 Stolen Harvest: The Hijacking of the Global Food Supply (Culture of the Land)

The plan of the 1% to make others disposable, discussed by Vandana Shiva, is manifesting in massive layoffs across the tech sector.

This week, Business Insider’s “10 THINGS IN TECH” writer Diamond Naga Siu reported, “On Wednesday, Amazon started its largest round of layoffs in company history after giving employees the heads up that they were coming two weeks earlier. Meanwhile, Microsoft finally confirmed 10,000 layoffs after reports days earlier that they were going to happen.”

“These cost-cutting measures are incredibly dire for employees. But they help companies come out on top,”

A day later, Business Insider reported that “Google is laying off 12,000 employees, or around 6% of its global workforce. Sundar Pichai, the CEO of parent company Alphabet, told staff in a memo that he took “full responsibility for the decisions that led us here.” Read his message to employees here.”

“Amazon employees were laid off via email. Rather than having a face-to-face meeting, employees learned about their layoff through generic emails. “Unfortunately, your role has been eliminated,” it read. Here’s the full, impersonal message.”

“That Stings — Microsoft hosted an invite-only concert. Days before layoffs were announced, Microsoft executives reportedly rocked out at an invite-only Sting concert. The exclusive fete of around 50 people was held in Davos, Switzerland. More on the private party here.” – Business Insider

On Jan 11, Industry analyst Doug Dawson, CCG Consulting published, “Measuring Sustainability.” “The longest-lived asset that is being constructed with grants is conduit. There is no reason why a well-maintained conduit system shouldn’t still be fully functional a century from now.” “There are big debates about the economic life of fiber. If you go by the economic lives allowed by IRS depreciation, then the expected life of fiber is 25 or 30 years. We know that’s ridiculous because there is plenty of forty-year-old fiber still chugging along in the field. We also know that fiber constructed today is far better than fiber built forty years ago. The manufacturers have learned to make higher-quality glass with less impurities. But the big change in the industry is that the folks that install fiber have learned techniques that minimize damage during construction. Poor handling of fiber manifests twenty years later as micro-fissures – and that means cloudy glass. Nobody will give an expected life for well-maintained fiber, but scientists at some of the manufacturers have privately told me that they think it’s at least 75 years – we’ll just have to wait to find out.” “The assets that cause the most concern for sustainability are electronics – be that fiber electronics or fixed wireless electronics. All electronics must periodically be replaced. I’ve seen some fiber electronics last fifteen years – but that seems to be near the upper end of economic life. The general industry wisdom is that fixed wireless systems have to be replaced every 7 to 10 years.” “This all means that the sustainability of electronics must be a concern for all technologies. Any ISP that wins grant funding will likely be replacing some electronics within a decade.” – Doug Dawson

From green washing, to testing ‘safety’ on inanimate dummies, to ignoring harm to human health and the environment, to employing tobacco scientists. to paying politicians, to planned obsolescence, to lack of security, to undisclosed dual uses including surveillance and control, to mining and disposal issues- the industry has been out of integrity for decades.

Reflecting on the January 2023 New moon, Druid teacher Sarah Furho wrote, “I wasn’t surprised when I read the Sabian Symbol for the degree of Sun and Moon when they conjoin this Saturday to begin a new lunar cycle and a new year for the Chinese: ‘AN UNEXPECTED THUNDERSTORM.  KEYNOTE: The need to develop the inner security which will enable us to meet unexpected crises.

“The unexpected thunderstorm connected me to the Tower Card in Tarot, which has a connection with Mars, an important player [ ] Mars is at 8 degrees of Gemini, at this moment the same degree and sign where it was located at the moment when America was founded.

The message of The Tower card is about the end of isolation. We are blown out of a situation which has become constrictive. When I see The Tower card, I think of the story of Merlin, and Vortigern’s Tower.

The British prince Vortigern had been at war with the Picts (pre-Celtic tribes),and had invited Saxons to come into his territory as a way to defend his castle and lands. He decided to build a tower for himself and his family in case either group should take over. This was in violation of his responsibilities to defend all of his people.

The tower would not stand over night, but kept tumbling down. After three attempts, he asked his magicians for help. They recommended the sacrifice of a virgin child.

Merlin was fourteen years old. His mother was a noblewoman who had born a mysterious child out of wedlock. Her story was of a demon who had entered her bedroom without permission. The young Merlin had no father to defend him and his mother was disgraced, so he was clearly marked for sacrifice.

He was taken to the site of the tower, and prepared for sacrifice. Instead, he began to ‘see.’

“Because you are ignorant of what it is that hinders the foundation of the tower, you have recommended the shedding of my blood for cement to it, as if that would presently make it stand. But tell me now, what is there under the foundation? For something there is that will not suffer it to stand.” The magicians began to be afraid, and made him no answer.

THEN said Merlin, who was also called Ambrose, command your workmen to dig into the ground, and you will find a pond which causes the foundation to sink.”

This accordingly was done. They found a pond deep under ground, which had made it give way. Merlin after this went again to the magicians, and said, “Tell me, ye false sycophants, what is there under the pond.” But they were silent. Then said he again to the king, “Command the pond to be drained, and at the bottom you will see two hollow stones, and in them two dragons asleep.”

And it was just so. Two dragons burst from the stones, one white and one red. They rose and twisted in the air and became symbolic of the struggle between the Celtic and Saxon people. When Merlin saw them, he broke into tears, and at that moment, he became the great magician of the British people forever after. Now the tower could be built to last, but it did not save the coward Vortigern, who was soon overthrown by the Saxons.”

Note to ‘Environmentalists’ from Earth: GET OFF THE WIRELESS BANDWAGON: An Unstable, Unsustainable Foundation Cannot Stand

The latest chapter to unfold in the wireless untruth realm occurred in L.A.  As reported by Fiber First L.A., “Despite overwhelming opposition from local citizens and support from across the country, the Los Angeles Board of Supervisors voted unanimously on January 10th to adopt changes to its zoning code supported by the wireless industry. Citizens have been stripped of their rights, fire and safety concerns have been ignored, critical environmental protections have been dismissed, and any checks on the wireless industry have been virtually eliminated.”

“On December 5th, Verizon submitted a letter to the LA Board of Supervisors with an attachment – a “petition” allegedly signed by more than 1,000 Los Angeles residents supporting the telecom-friendly ordinances.

We were skeptical. And when we checked, a lot of the names turned out to be minors, or people who had died. We spoke to a handful of people whose names were on the petition, and they all denied having signed it. Is your name on this list? Let us know! Filing a false instrument with a government agency is a felony under California law.” -Fiber First LA

On the other side of the country, the Verizon Pittsfield tower debacle continues.

We can learn from Vandana Shiva’s historical accounting of the division created between the Hindus and Muslims, and Sarah Furho’s explanation of the war between the Celts and the Saxons.

Do your part, don’t let this stand. If you participate in the big tech and wireless paradigm, give 1% more of your time and energy to and with Nature, and to ensuring that everyone in your local community is “connected but protected.” Every wireless/big tech consumer can become part of the solution, and help foster necessary cooperation, integrity and accountability. It’s an extraordinary lifetime for manifesting virtue, truth, beauty, and goodness. Don’t miss this train.