Bills prefiled in the Missouri House and Senate would legalize retail sales of raw milk in the state and take a step toward nullifying a federal prohibition scheme in effect.

Rep. Ann Kelly (R) filed House Bill 78  (HB78) on Dec 1. Sen. Bill White (R) filed a companion – Senate Bill 86 (SB86) –  on the same day. The legislation would legalize the sale of “Grade A retail raw milk or cream” produced in Missouri at grocery stores, restaurants, soda fountains, or similar establishments, as long as the milk is clearly marked with a specified warning label. “Grade A retail raw milk or cream” is defined as “raw milk or cream produced upon dairy farms conforming to sanitation and bacteriological standards that meet or exceed those of Grade A pasteurized milk.”

Currently, Missouri law only allows the sale and delivery of raw milk directly from the farm to a consumer.

Enactment of this legislation would not only take another step toward opening up the raw milk market in Missouri; it would also move forward efforts to nullify a federal raw milk prohibition scheme in practice and effect.

Not only do the feds ban the transportation of raw milk across state lines, but they also claim the authority to ban unpasteurized milk within the borders of a state.

The FDA clearly wants a complete prohibition of raw milk and some insiders say it’s only a matter of time before the feds try to institute an absolute ban. Armed raids by FDA agents on companies like Rawsome Foods back in 2011 and Amish farms over the last few years also indicate this scenario may not be too far off. 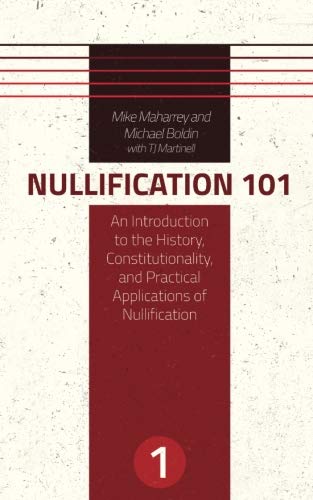 Nullification 101: An Introduction to the History, Constitutionality, and Practical Applications of Nullification by Mike Maharrey and Michael Boldin

HB78 and SB86 will be officially introduced when the Missouri legislature convenes on Jan. 4, 2023. They will need to be assigned to a committee, receive a hearing, and pass the committee by a majority vote before moving forward in the legislative process.

Michael Maharrey [send him email] is the Communications Director for the Tenth Amendment Center. He is from the original home of the Principles of ’98 – Kentucky and currently resides in northern Florida. See his blog archive here and his article archive here. He is the author of the book, Our Last Hope: Rediscovering the Lost Path to Liberty, and Constitution Owner’s Manual. You can visit his personal website at MichaelMaharrey.com and like him on Facebook HERE