EMR/RF/5G/Wireless: Consequences of a Vacuum “When Rightful Proportions are Exceeded” “Citizens are the ones writing and reporting the truthful history.”

For those paying attention, It’s a scary Halloween story, but not a mysterious one.

The Consequences of a Void

“Zvi Szir is a co-founder and director of the newARTschool in Basel, Switzerland, where he has been teaching painting, contemporary art, and Anthroposophy for the last 24 years. He is a painter, writer, and lecturer.”

Waldorf Today recently published an article by Zvi entitled “The Vacuum and the Plague: A Meditative Path into the Reality of the Moment.”

”Where an activity is neglected, something else unfolds”

“[ ] wherever an activity does not unfold, a space is made available for another being, another activity, to grow. Someone else moves into this emptied space and spreads out their life and activity in the wrong place, in an area of life where their activity is not justified.

The spiritual vacuum is a beckoning temptation for other beings to expand their horizons of action so that their rightful proportions are exceeded; that which is right and good in a particular cosmic proportion becomes monstrous when it outgrows its necessary sphere of activity: it becomes a plague.

The being of the plague is that activity through which a being expands beyond its justified field of existence on a catastrophic scale. The fact that the catastrophe might serve to bring back a state of balance through a dynamic process does not make a catastrophe less catastrophic.” – Zvi Szir

Like, for instance, with cell towers, satellites, ‘small cells,’ sensors, smart meters, antennas, and all things wireless. And cell phones.

FCC and Congress: A Vacuum, Created by Regulatory Capture

As reported by Joel Moskowitz, “At the request of the U.S. Congress, in 2012 the U.S. General Accountability Office (GAO) conducted an investigation and issued a report, “Exposure and Testing Requirements for Mobile Phones Should Be Reassessed” (GAO 12-771).

The report made two recommendations to the Federal Communications Commission (FCC), the agency in the Department of Commerce responsible for ensuring cell phone safety:

(1) formally reassess the exposure limit for radio frequency radiation and change the limit if appropriate; and 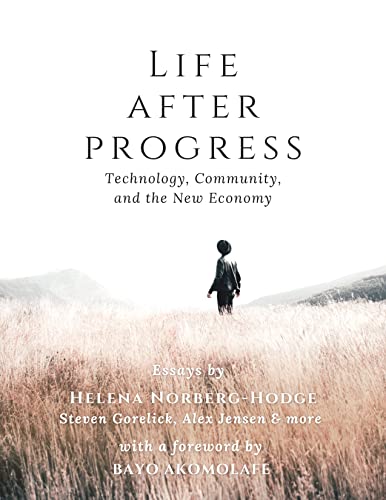 Life After Progress: Technology, Community and the New Economy

(“The U.S. Government Accountability Office (GAO) is an independent, nonpartisan agency that works for Congress. Often called the “congressional watchdog,” GAO examines how taxpayer dollars are spent and provides Congress and federal agencies with objective, reliable information to help the government save money and work more efficiently.”)

The 2012 GAO recommendations remain unaddressed, as does the 2021 ruling in the case brought against the FCC by the Environmental Health Trust and Children’s Health Defense. The court ruled that the FCC’s decision not to review its safety guidelines was arbitrary, and capricious.

The Environmental Health Trust, explained, “The court held that the FCC failed to respond to “record evidence that exposure to RF radiation at levels below the Commission’s current limits may cause negative health effects unrelated to cancer.” Further, the agency demonstrated “a complete failure to respond to comments concerning environmental harm caused by RF radiation.” The court found the FCC ignored numerous organizations, scientists and medical doctors who called on them to update limits and the court found the FCC failed to address these issues:

the testimony of people injured by wireless radiation,

impacts to wildlife and the environment

impacts to the developing brain and reproduction.” – EHT

The FCC is a Captured Agency, as is Congress.

Both the FCC and Congress are working on behalf of the industries they are supposed to regulate.

As reported by Verge in 2017: “Congress took $101 million in donations from the ISP industry “— here’s how much your lawmaker got Comcast, Verizon, AT&T, and others spread their money far and wide to influence your government.”

Allan Frey: A Vacuum Created by War: Lack of Consideration of Radar and Safety

In 1960, Allan Frey discovered that radar technicians could “hear’ microwaves, outside what was assumed to be the normal range for human hearing.

The Cellular Phone Task Force reported, “I could hear it, too,” he said. “I could hear the radar going ‘zip, zip, zip’.” Frey went on to establish that the effect was real—microwave radiation from radar (and other source) could somehow be heard by human beings. The “hearing,” however, didn’t happen via normal sound waves perceived through the ear. It apparently occurred somewhere in the brain itself, as microwaves interacted with the brain’s cells, which generate tiny electrical fields. Frey proved also that many deaf people and animals could hear microwave radiation. This phenomenon came to be known as the Frey effect, or simply “microwave hearing.”

In a study published in 1975 in the Annals of the New York Academy of Sciences, Frey reported that microwaves could induce “leakage” in the barrier between the circulatory system and the brain. Breaching the blood-brain barrier is a serious matter. It means that bacteria, viruses and toxins from the blood can enter the brain. It means the brain’s environment, which needs to be extremely stable for nerve cells to function properly, can be perturbed in other dangerous ways. Frey’s method was rather simple: He injected a fluorescent dye into the circulatory system of white rats, then swept the ¬microwave frequencies across their bodies. In a matter of minutes, the dye had leached into the confines of the rats’ brains. Dr. Leif Salford, whose work is also highlighted here, is currently the most active researcher continuing Frey’s pioneering work on the blood-brain barrier.” – Cellular Phone Task Force

In September of 2012, Allan Frey penned an article: “OPINION: CELL PHONE HEALTH RISK? Security concerns during the Cold War may have led to the generation of misinformation on the physiological effects of microwave radiation from mobile phones, 2012.”

The shutdown of normal open research and misinformation caused by war continues to create a void.

A Vacuum: 136 Overrides of Checks and Balances for Presidential Emergency Powers

In 2019, the Atlantic noted, “The moment the president declares a “national emergency”—a decision that is entirely within his discretion—he is able to set aside many of the legal limits on his authority”

The Brennan Center for Justice has listed “A Guide to Emergency Powers and Their Use, “The 136 statutory powers that may become available to the president upon declaration of a national emergency.” They have also provided a list of “Declared National Emergencies Under the National Emergencies Act.”

Since 9/11, every administration has re-authorized its use of emergency powers.

An unacknowledged plague refers to itself as “the wireless ecosystem.” We are in the midst of an invisible man-made imbalance that is consuming the environment to feed itself, extending from the depths of mineral mines to the bottom of deep oceans, across the land, and reaching throughout the earth’s atmosphere.

Writing about another topic, Zvi Szir asked, “The urgent question remains: what is the vacuum that made this spiritual derailment possible, or even necessary? What essentially didn’t happen? What spiritual activity withdrew, left us, allowing the vacuum to emerge.”

It’s not a Halloween mystery. Lack of community consent; lack of precaution, premarket safety testing, monitoring, and appropriate regulatory response; and blind acceptance of the rush to override Precaution based on false or exaggerated urgency (for example, to win the race to beat China to 5G) is creating the next wave of “Late Lessons from Early Warnings”

Zvi observed, ‘It is clear that [] truth has become the victim of this plague. Of course the truth itself cannot be harmed, only the capacity of human beings to know it, to accompany it in thought.” “I can discern a displacement in human experience that has unhitched thinking and observation, leaving significant areas of daily perception categorically inaccessible to cognition.

UNDENIABLE – A Risk Too Great to Take

Helena-Norberg Hodge is the founder of a movement towards localization vs. globalization.

Here is the video (11 1/2 minutes) of Helena addressing the online gathering, “Celebrating Local Successes and Actions.”

In this video, Helena Norberg-Hodge encourages us to join the growing movement of people around the world who are returning to localization, i.e. decentralized, human-scale living. As with the growing movement toward locally produced foods, technology should be decided at the local level, and should be in service to all life. The corporate/government alliance should not dictate our tech future.

Helena Norberg-Hodge is a pioneer of the new economy movement. She is the founder and director of the international non-profit organization, Local Futures, and the convenor of World Localization Day. She is author of the inspirational classic Ancient Futures, and Local is Our Future and producer of the award-winning documentary The Economics of Happiness. She is the founder of the International Alliance for Localization, and a cofounder of the International Forum on Globalization and the Global Ecovillage Network.

Helena is a recipient of the Alternative Nobel prize, the Arthur Morgan Award and the Goi Peace Prize for contributing to “the revitalization of cultural and biological diversity, and the strengthening of local communities and economies worldwide.” And most of all, Helena is a kind, gracious and loving human being and an inspiration to so many around the world. 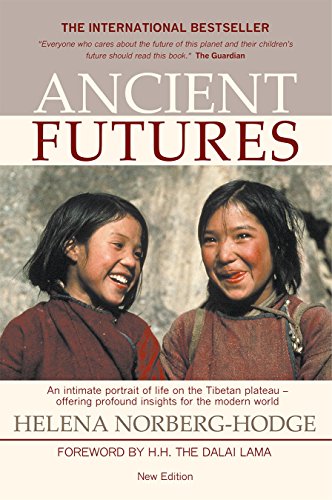 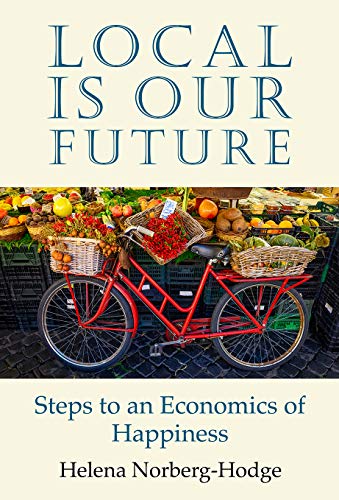 Local Is Our Future: Steps to an Economics of Happiness

The Rights of Nature

“The Global Alliance for the Rights of Nature is a global network of organizations and individuals committed to the universal adoption and implementation of legal systems that recognize, respect and enforce “Rights of Nature”

Rather than treating nature as property under the law, the time has come to recognize that natural communities have the right to exist, maintain and regenerate their vital cycles.”

Engagement, Stopping “After me, the deluge”

The late Jose Arguelles noted, “the technosphere runs counter to the laws of the biosphere” He viewed the technosphere as “governed by spirit of fortune hunting, by mediocrity, by absence of social consciousness by the ideal of destruction and by the egotistic doctrine of ‘after me, the deluge.’ ”

“Unless we cultivate a non-anthropocentric view, there will be no release from the calamity that is now engulfing us, the point is not maintaining the global economy, but of saving the biosphere.”

Saving the biosphere requires recognizing the vacuum that enabled catastrophic growth of the wrong thing in the wrong place, including cell towers and smart meters next to bedrooms, schools, and other sensitive environments.

Saving the biosphere requires re-evaluating the safety of wireless technology and infrastructure in recognition of the vacuum.  It requires addressing the wireless footprint.

Jane Goodall stated, “You cannot get through a single day without having an impact on the world around you. What you do makes a difference, and you have to decide what kind of difference you want to make.”

Unexamined, invisible wireless competing with the inherent synchronization of the biosphere is causing deleterious impacts. No biologically accurate testing, no routine monitoring, no investigation of damage, no accountability, no checks and balances, mercenary scientists, suppression of independent research, and measuring the temperature of plastic heads filled with jell-o created a vacuum,

We may not be able to stem the tide of untruths, but we can confront the untruths we tell ourselves, If we use wireless technologies, we have a response-ability to pursue safer choices.