How to Bake Bread Off-Grid In The Seven Pillars of Wisdom, Lawrence of Arabia notes that by switching to carrying flour rather than rice in their packs, his men were able to carry much more calories with them. Preppers have a special affinity for rice, but are there better options out there for long-term bug-out situations? We’ve talked about this briefly in the past before, discussing non-traditional BOB foods, but what does that look like in practice?

If you incorporate flour into your BOB, how do you use it out in the woods?

Here are two means of using your flour while out in the wild I thought you might be able to glean something from.

I’ll start by saying that neither of these recipes is my own. I totally stole them from Creek Stewart of “Fat Guys in the Woods” (one of my favorite shows when it aired). He highlights these recipes in his field manual that we’d discussed in the top non-military field manuals post.

How to make stick bread (you’ll need a stick).

This is my favorite recipe of Creek’s. Why? Because it’s as simple as it gets. I don’t really follow his recipes to the letter, so this is my simple spin on stick bread.

I pack in a Ziploc sandwich bag full of flour. I put the Ziploc bag inside of another Ziploc bag to eliminate spills. Opening up your dry bag after a full hike at dinner time only to discover that there’s flour all over your MREs everywhere is a disheartening experience. That extra Ziploc is your insurance plan. 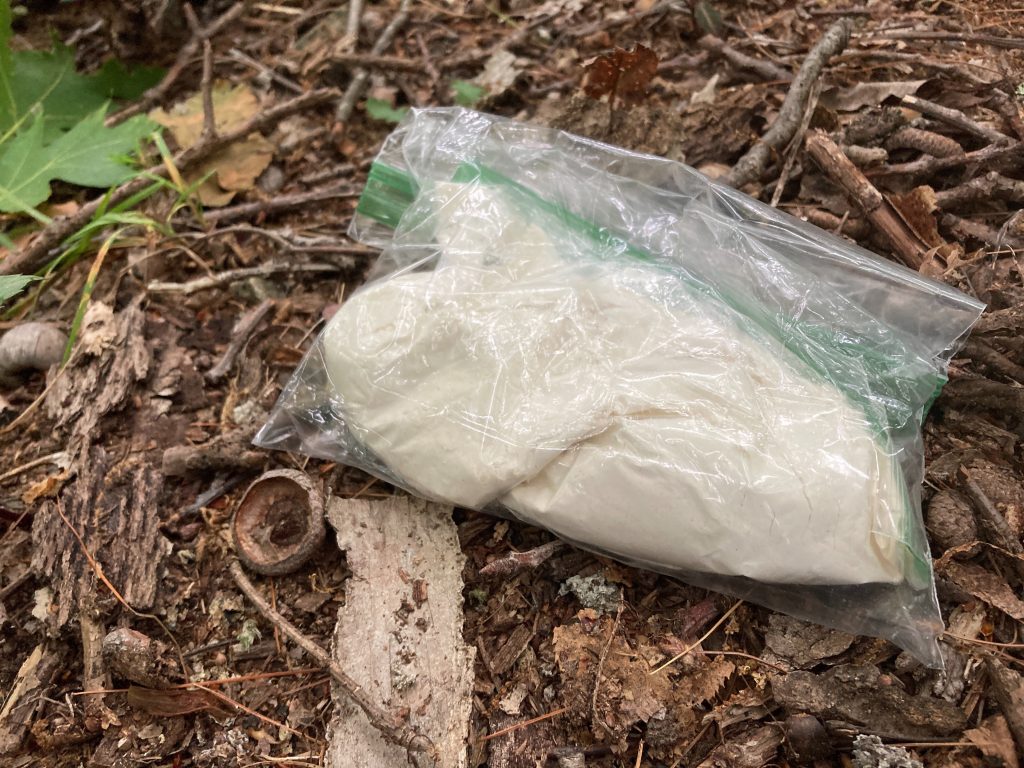 When setup time comes, I build a twiggy fire. That’s just a small campfire. There’s not a lot of signature with a twiggy fire, so if you’re concerned about that, this should help to ease your mind. You can always bake in the daytime if a light signature is a concern of yours as well.

I’m using a Kelly Kettle Hobo Stove in these pictures.

What I do is open up my Ziploc bag, pour in a bit of water until I end up with a dough mixture, and then Play-doh roll a snake/blob and put it on a stick that I’ve carved the bark off of. (My understanding here is that there are some sticks you shouldn’t use for this, but I’m not really sure what they are. Call me foolhardy, but I’ve always just picked a stick and hoped for the best. So far, so good. You probably want to figure this out.) 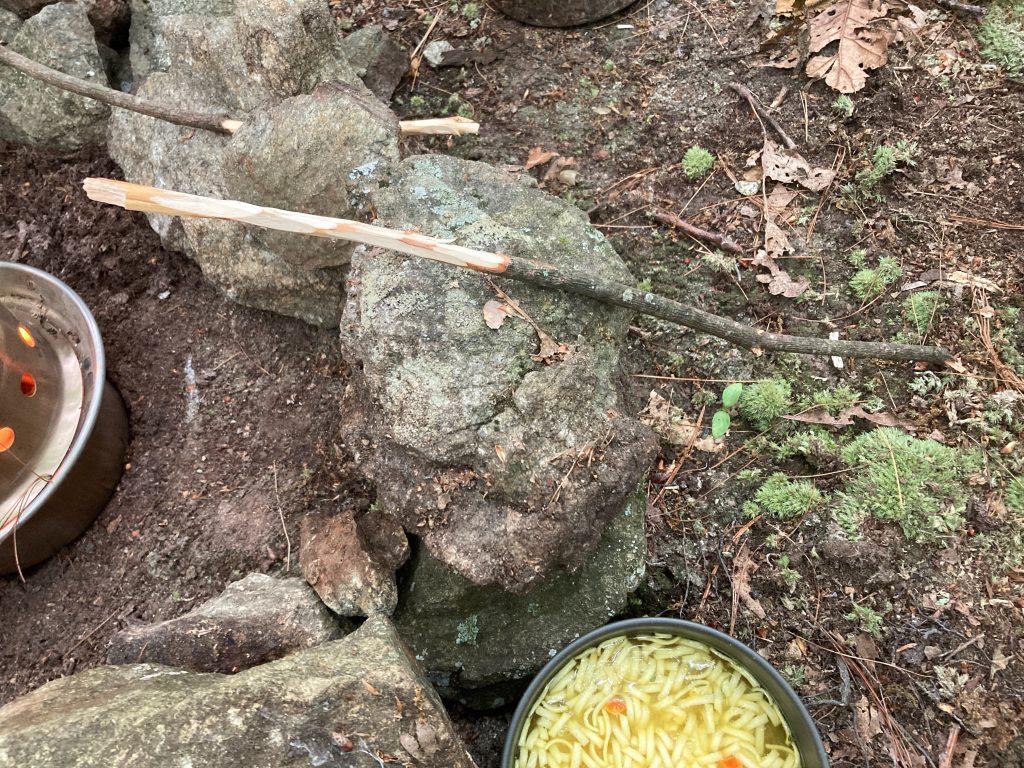 I then hold the dough-covered stick over the fire until it ends up turning into bread. Easy-peasy. Creek says until golden brown, but mine always end up tinged with black.

Your hands will be covered with sticky flour mess after this process. I get it off by rubbing my hands together until it all peels off of its own accord. I don’t like going to sleep with bears thinking I smell like a biscuit.

(Don’t starve! Read our free QUICKSTART Guide to what to eat when the power goes out.)

How to make shovel cakes

According to Creek, farmhands used to rinse off their shovels in the creek at lunchtime and then use the spade head as a form of griddle to bake bread. Around here, my shovels are largely used to remove dead critters into the woods, so there’s no way I’m doing that. Even if I heated the spade head over a fire, there’s too much of a mental block there. (“I love opossum-flavored bread!”)

I’ll note that I made this bread off-grid here in the images, but not while sleeping out in the woods as I did with the stick bread images above.

Using my same Ziploc method, I used corn meal to fashion out a little cake on a little steel plate I was using as my frying pan. You do need butter for this recipe. It tastes very bland otherwise. I doubt you’re going to be carrying butter in your BOB, but if you’re at your house when you need to make some off-grid bread, this is something to consider. 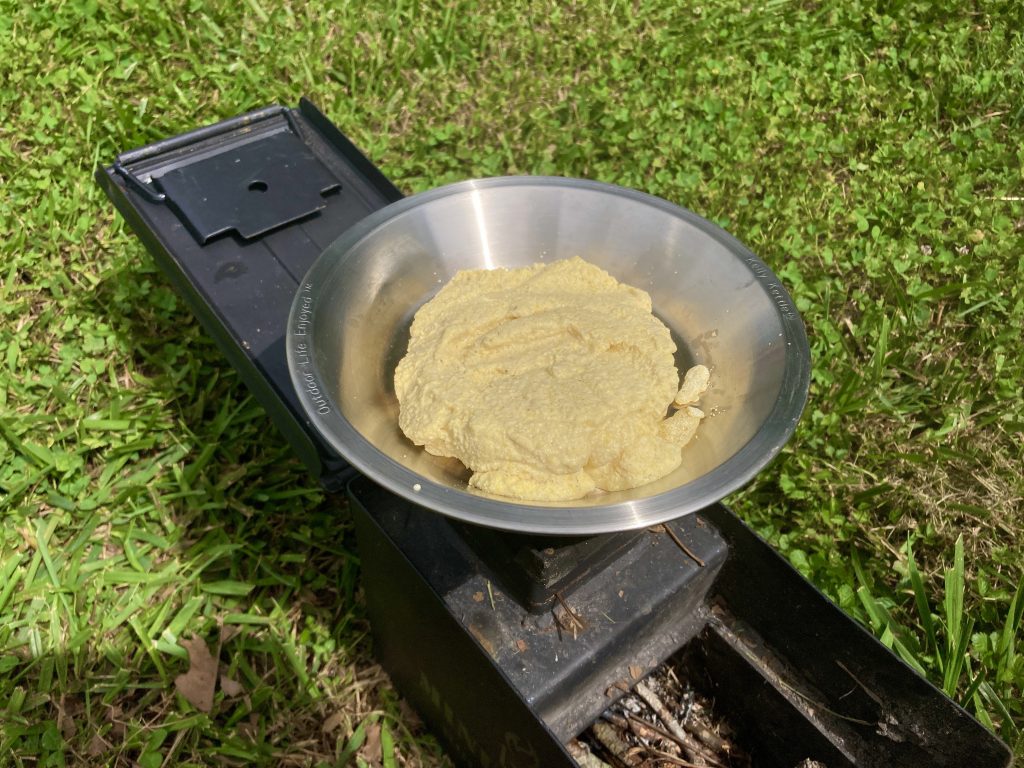 All you have to do is let the cake cook on one side until it’s tough enough to be flipped over without breaking into a bunch of pieces. Then, cook the other side for a few minutes, and you’ve made yourself a “shovel cake,” aka a big piece of cornbread. That black stuff is what puts hair on your chest.

Both of these are super simple off-grid bread recipes.

Bread is fairly easy to make, even if you would never consider yourself a Martha Stewart. My version of off-grid stick bread is really nothing more than flour and water. I wouldn’t want to eat it as the main course, but it is very satisfying as a side dish while you’re out in the woods. If you’ve got more Guy Fieri flair than I do, you could easily add in whatever other ingredients and spices to make these dishes more palatable.

The stick bread could easily benefit from some type of herb, something easy enough to add to your BOB. Shovel cakes simply need butter, and they’re delicious. If you can figure out a way to get eggs with you out into the woods in one piece, you have even more options at your fingertips as well.

What are your thoughts on off-grid bread, however? Are there other recipes or methods that you can recommend? Let us know what you’re thinking in the comments below. (Also, if you’ve read Creek’s apocalyptic fiction book, let me know if it’s worth my money.)

Aden Tate is a regular contributor to TheOrganicPrepper.com and TheFrugalite.com. Aden runs a micro-farm where he raises dairy goats, a pig, honeybees, meat chickens, laying chickens, tomatoes, mushrooms, and greens. Aden has four published books, The Faithful Prepper,  An Arm and a Leg, The Prepper’s Guide to Post-Disaster Communications, and Zombie Choices. You can find his podcast The Last American on Preppers’ Broadcasting Network.