In the Battle Over the Right to Repair, Open-Source Tractors Offer an Alternative Jack Algiere has always been a tinkerer. As a child in the 1980s, he would repair and swap out engines in the broken equipment on his family’s farm, often figuring out exactly what he was building as he went along.

Algiere grew up in an era when it was second nature for farmers to fix their equipment—before farm equipment manufacturers like John Deere and others started incorporating proprietary software, parts, and tools only accessible to authorized dealerships.

Now, amid a growing “right to repair” movement pushing farm equipment manufacturers to shift their practices, some have gone a step further by calling for a new, production model altogether, built on an open-source system.

Under this model, farm equipment is designed to be easily modified and repaired by relying on accessible, universal parts, while sharing or licensing the design specifications and source code.

Algiere, who is the agro-ecological director at the Stone Barns Center for Food & Agriculture in Tarrytown, New York, is a proponent for open-source equipment that farmers can customize to the unique needs of their farms.

In his case, that means 12 acres of organic vegetables, including up to 500 different plant varieties at any one time.

“We have a lot of open-source equipment and tools that we’ve designed ourselves. We fix and repair and modify just about everything,” said Algiere. “It’s so critical—as critical as having good seeds.”

Along with easily repairing his equipment, Algiere has found that open-source equipment has helped him more effectively manage the highly diversified farm.

Most commodity-scale farms are designed to accommodate the size and shape of large tractors and combines. When farmers want to add a new crop, that may also mean adding more expensive machinery.

However, open-source equipment is “diverse enough and adaptable enough to switch from crop to crop,” said Algiere.

Algiere is compelled by the way the technologies of other industries, like drills, motocross, electric wheelchairs, forklifts, bicycles, and lawn mowers, have developed small-scale, precise equipment suited for some farms.

He points to how wheelchair technology has hand controls that require a “very light touch,” which could be useful in building precise, responsive farm equipment.

About a decade ago, Algiere and a group of engineers and farmers came together to explore how to cobble together small-scale equipment that can be modified and repaired, referring to the concept of “slow tools.”

The loose network still swaps ideas and information, though they haven’t been able to meet since 2019.

While there are pockets of interest, the open-source paradigm has yet to gain the traction that many of its supporters believe it deserves, still adopted by only a very marginal slice of the U.S. farm equipment industry and small-scale producers.

As climate change and supply chain issues disrupt global agricultural systems, while farmers demand more autonomy over their equipment, its proponents are hopeful that open-source technology will gain more steam.

There remains little open-source farm equipment on the market, especially in the face of a highly concentrated industry, where three major corporations—Deere & Company, CNH Industrial, and AGCO—manufacture the vast majority of farm equipment in a tightly closed production model.

However, Horace Clemmons, who now runs Ronnie Baugh Tractors, is convinced that it is only a matter of time before the current paradigm shifts, following a similar pattern that he witnessed while working as an engineer at IBM.

Clemmons recalls how it wasn’t too long ago that IBM, known for its research and technological innovations, developed its products under a lock-tight production system, resembling the prevailing model for farm equipment today.

“John Deere today is where IBM was in 1981,” said Clemmons. “IBM was the dominant global computer supplier and if you bought it from them, you had to get everything from them.”

But this shifted with the advent of IBM’s personal computer (PC), in 1981, developed with an open architecture design to make upgrading or swapping out parts easier.

Clemmons recalled how the PC’s lead engineer, Don Estridge, had a sign in his office that read, “We will make a computer using off-the-shelf parts, and we will publish the design,” which helped spur a boom in the development of PCs with this shared, underlying architecture.

“So, the PC industry exploded because everything was shared. Not one company was owning the technology,” said Manny Reyes, an agroecological engineer at Kansas State University who works with Clemmons with a partnership in Cambodia.

A similar transformation occurred with the advent of Linux in 1991, the open-source operating system now found on the majority of computers, developed to replace the proprietary system known as Unix.

“[Linux is] the most stable solid operating system and has the fewest security bugs of any operating system in the world,” said Bradley Kuhn, a free software activist and policy fellow and hacker-in-residence at the Software Freedom Conservancy.

He attributes the security of Linux to its open-source design, which has been modified and replicated by what he calls the “collaborative community of thousands of companies” along with individuals.

Yet despite the success of open-source design in other industries, farm equipment manufacturers have yet to follow suit for the most part.

“I said, ‘We’re going to build a tractor with all off-the-shelf parts and it’s going to be easy to repair,’” said Clemmons.

In 2014, he worked with Saul Berenthal, a Cuban-born software entrepreneur, to develop an open-source tractor for small-scale farmers there.

It relies on a Honda engine, universal parts, and has a design that is easy to modify. The tractor, called the Oggún, was originally intended to be sold and manufactured in Cuba by local factories, but that partnership remains contingent on the embargo lifting.

Now, the Oggún is sold worldwide for $20,000 (up from the original $10,000 price to reflect upgrades and manufacturing-cost increases) and shipped from a warehouse in Alabama where Clemmons’s sole employee assembles the machine.

The design can be licensed by others who want to build it from scratch for $250 per sale. But even the fully assembled tractor, which resembles a bright red go-cart, is more of a platform—a starting point that farmers, local mechanics, and other tinkerers can modify to suit their needs. (John Deere’s compact tractors sell for between $13,000 to $50,000, depending on the features.)

The Oggún doesn’t even have a logo because “It’s not my tractor. It’s your tractor,” as Clemmons tells customers.

The idea is, at its essence, to design components to be made at scale, like cobbled-together Legos or “platform architecture”—in contrast to the prevailing model for farm equipment that uses “product architecture” to produce tractors as fixed replicas.

Clemmons points out that it is the same model that is used by software companies in licensing designs, selling a specific application or use rather than a product.

And while Clemmons’s tractor does not rely on software, this model could extend to software-dependent tractors, like John Deere’s, primarily by making the software’s source code accessible.

Among his customers is Algiere, of Stone Barns, who purchased an early-model Oggún tractor with an immediate intention to tinker.

“I did right away start to cut steel and weld sections, shorten and elongate stuff, and apply different implements,” he said. Every time he did, he shared a photo with Clemmons, who makes himself available to his customers by phone, to support and hear what new configurations emerge.

The design that Algiere settled upon is shorter and higher, able to fit more implements necessary for the many varieties of crops. “We literally cut the tractor in half, modified the floor and raised that 6 inches, changed how the bar went together, put some new steel plates in and bonded it back together,” said Algiere. “It’s incredibly easy to work on. Everything on the tractor is available right at the corner hardware store.”

“I bought it for $10,000 and it was like it paid for itself over and over again,” said Algiere, given that it’s been able to help him cut down on labor costs.

“That kind of mechanical advantage is really important, if I cannot hire one or two people.”

Beyond cutting down on labor costs, farmers have also found that the tractor cuts down on repair costs by enabling them, through its intuitive design and accessible parts, to fix it themselves or take it to a local mechanic.

“To an extent, the tractor is a skeleton. I was able to get to all the components of the tractor, without taking off the any paneling,” said Steven Crist, the field manager of Hudson Valley Seed Company (HVSC) in New York.

“So, when you need to fix something, you can see everything. It’s easier to diagnose.”

Admitting that he is not a “tractor guy,” Crist felt a flicker of panic when his Oggún first stalled out in the field.

A broken tractor often leaves farmers in a vulnerable position, forking over money for repairs and costing them time otherwise spent in the field. But Crist called Clemmons, who guided him through the repair which turned out to be “massively simple.” 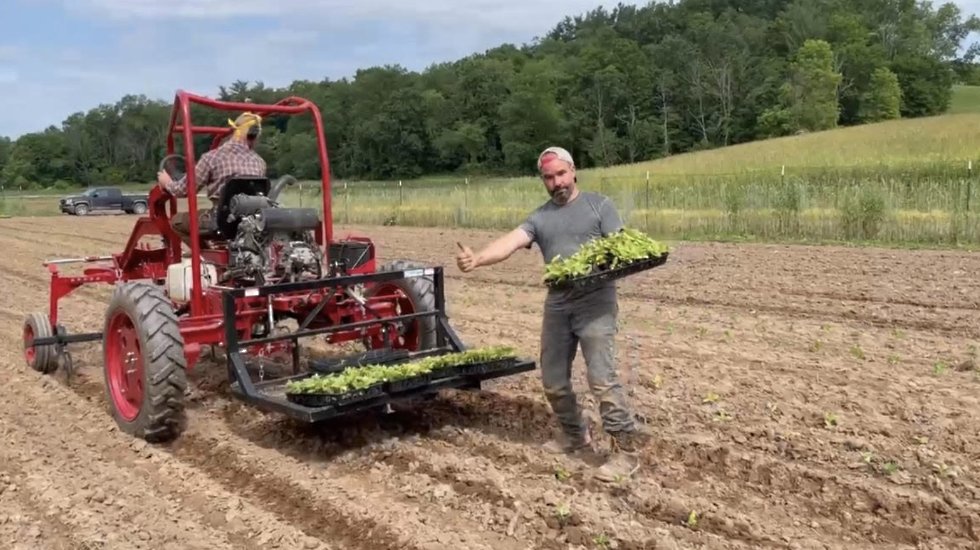 Charlie Crist of the Hudson Valley Seed Company, with an Oggún tractor. (Photo courtesy of HVSC)

Like Algiere, Crist has found the tractor’s adaptable design to be especially suited to HBSC’s farm, where they grow 80 varieties of plants for seed.

“We needed a tractor that was versatile because each one of these crops needs something slightly different, but what they all need is cultivation,” said Crist.

The Oggún’s cultivar toolbar enables him to swap out different instruments for every crop.

“It is really very useful—kind of like a blank canvas,” he added.

Clemmons sees this as especially key in Southeast Asia and Africa, where farm equipment often represents an even higher share of a farm’s investments than it does in the U.S.

For that reason, Clemmons has developed partnerships with universities, including in Cambodia, Senegal, and the Philippines, selling the design to be further developed and manufactured by local companies and sold to small-holder farmers.

The idea is also to create more regional, country-level manufacturing for farm equipment, rather than having farmers rely on the major global manufacturers whose sales don’t benefit the local economy.

“It could be modified not only for the country, but for a given location in that country. So, it would be specific to the needs of the community,” said Reyes, who leads the partnership with the Royal University of Agriculture in Cambodia.

“There is no way that a farmer in Southeast Asia can get out of poverty, unless we are able to manufacture a tractor that is simply made in the country, with parts that are available to the farmer for quick repair,” said Reyes.

He says the current model for farm equipment doesn’t just hurt regional economies in other countries, but also within the United States where independent farm mechanic shops have been disappearing, because they are often unable to access the parts needed for repairs.

If it catches on in other countries, Clemmons is hopeful that the open-source model could turn a corner in the U.S., supporting a more regional, adaptable food system where farmers have more control over their tools.