Electropollution from the Earth-shrouding and penetrating cybersphere of telecommunications is a major emerging existential threat and One Health issue of this Anthropocene age. Extensive scientific documentation of this critical concern is appended in this overview with regard to public, wildlife and domestic animal health and well-being. These harmful consequences and their minimization need to be considered by all involved, from providers, users and exposed communities to responsible providers and governmental regulatory agencies national and international.

“Sensitivity to electromagnetic radiation is the emerging health problem of the 21st century. It is imperative that health practitioners, governments, schools and parents learn more about it. The human health stakes are significant.“ – William Rea, MD, Founder & Director of the Environmental Health Center, Dallas and Past President, American Academy of Environmental Medicine.

“The greatest polluting element in the earth’s environment is the proliferation of electromagnetic fields.”- EMF pioneer and Nobel prize nominee Dr. Robert Becker.

“Because of the recent proliferation of radio frequency radiation from cell phones and towers, terrestrial antennas, Wi-Fi and Wi-max systems, broadband internet over power lines, and personal electronic equipment, we may be facing a looming epidemic of morbidity and mortality. In Dirty Electricity, he reveals the steps we must take, personally and as a society, to coexist with this marvelous but dangerous technology.” – Samuel Milham, MD, MPH, author of Dirty Electricity.

For a well-documented report on the human effects of electropollution see Michael Kagelidis’ review article Electrohypersensitivity: What you need to know about the allergy of the 21st century.

Ronald Kostoff, Ph.D. at Georgia Institute of Technology School of Public Policy issued a 2020 report called, “The Largest Unethical Medical Experiment in Human History” which documents the validity of these concerns

Our planet is a living biosphere (including the atmosphere), what some call the anima mundi or soul of the Earth. It sustains all sentient beings whose bioelectrical fields are attuned to the Earth’s electromagnetic field. The planetary biosphere is being covered by the electronic cybersphere, the realm of information technology and electronic communication, especially the Internet. Helping interconnect and socialize humankind, this is seen by some as the “hominizing” techno-evolution envisioned by Fr Pierre Teilhard de Chardin, SJ, facilitating the genesis of the noosphere. the collectively connected evolutionary matrix of human consciousness. (1).

But the nascent global network of 5G and other telecommunications and associated mega-energy demands of data storage and services, other forms of non-ionizing radiation (NIR) and electromagnetic fields, (EMFs), are harmful at various frequencies and intensities. They are known to affect neuronal function and DNA, may precipitate techno-devolution and degenerative changes in human psychophysiology, health and behavior. (2) They may also decimate insect and other wildlife species and populations, declining biodiversity affecting ecosystem viability and aggravating the consequences of climate change, detrimental to agriculture and public health and the economy. Electromagnetic fields from powerlines, cell phones, cell towers, satellites and wireless impact the birds, bees, wildlife and our environment. (3).

The CDC states, “We don’t know for sure if RF radiation from cell phones can cause health problems years later. The International Agency for Research on Cancer (IARC) has classified RF radiation as a “possible human carcinogen.” The Bioinitiative Report 2012 makes the claim that there are significant health risks associated with low frequency non-ionizing electromagnetic radiation[8] “BioInitiative Report: A Rationale for a Biologically-based Public Exposure Standard for Electromagnetic Fields (ELF and RF)”.

Hundreds of thousands of data storage and streaming centers around the world powered by fossil fuels and the high energy demand of 5G compared to wifi wireless technology are escalating carbon emissions and have become a major contributor to the global Climate Crisis.

According to Physicians for Responsible Technology (4), “A diverse array of animal life relies upon the earth’s magnetic field for navigation, breeding, feeding, migration and survival. Biologists have discovered that wireless electromagnetic radiation disturbs internal magneto-receptors used for navigation, as well as disrupting other complex cellular and biologic processes in mammals, birds, fish, insects, trees, plants, seeds and bacteria with profound impacts on the natural environment. Different species have different interactions with radiofrequency radiation (RFR) and differ in their toxic effect. These effects may not be immediately apparent with a slow decline in the health of wildlife seen over time with cumulative exposure.”

Increased Radiofrequency Radiation and The Decline of Birds, Bees and Wildlife

Biologists have noted that wildlife are susceptible to harm from manmade ambient electromagnetic fields. Researchers are now attributing RFR from cellular telecommunications to be a contributing cause of bee “colony collapse disorder”, insect disappearance, the decline in house sparrows in London, as well as the steady deterioration of the worlds bird population with now than 40% of bird species under critical threat. Scientists note a serious lack of radiation monitoring and protocols to study the impacts and call for precaution in the placement of cell towers and further expansion of wireless broadband. In the United States, Section 704 of the Telecommunications Act of 1996 does not allow consideration of environmental effects in the placement of cell towers. Telecommunications Act of 1996

The European Commissions Scientific Committee on Health and Environmental Emerging Risks (SCHEER) in 2018 issued their emerging risks report. They listed 5G electromagnetic radiation as an emerging risk due to it’s effects on wildlife. They pointed to a recent article:

Adverse responses from radiofrequency radiation that have been identified include abnormal behavior, developmental abnormalities, diminished reproduction and increased mortality. Birds, bees, turtles, dolphins, salamanders, salmon, amphibians and other animals use the earth’s weak magnetic field and their own internal magneto-receptors to navigate. Birds have feathers that can act as antenna and amplify the negative effects of RF radiation (5). Insects, the base of the food chain, appear particularly susceptible to radiofrequency radiation, especially 5G millimeter wavelengths which are the size of the insect and create a damaging resonance effect.” Several studies confirm these assertions. ( 6,7, 8).

Mammals, like humans, have similar reproductive organs, immune systems and nervous systems, thus are susceptible to molecular and cellular harm from artificial wireless radiofrequency wavelengths. Katie Singer, in her extensively referenced book Electronic Silent Spring, highlights that the Earth’s living systems evolved their own internal and external signaling systems in the presence of the earth’s low electromagnetic environment and thus are vulnerable to the much higher levels of artificial pulsed electromagnetic radiation experienced today. (9)

Combined with habitat loss and pesticides, the demise of insects and insectivores is the new norm of the Anthropocene epoch, the consequences of which will highly detrimental to agricultural productivity, the economy and public health especially with the emergence of resistant species and strains of insect pests and pathogenic vectors of disease.

Already changes in brain function and connectivity are being documented in children with early exposure to cybertechnology, (10) especially addictive computer games, calling for limited daily exposure. People who are electrosensitive to NIR and EMFs are developing often severely incapacitating physical and cognitive difficulties which are generally dismissed by health authorities. Many otherwise healthy adults experience addiction-withdrawal when there are power failures. GPS/satellite telemetry process (from Argos 2008:11). The GPS receiver stores location data. This data is later transmitted to the Argos satellite, where it can be distributed to users worldwide.

Conspiracy theories concerning the rise of wireless technology such as it being part of a global technocracy controlling human behavior abound. They deflect legitimate questioning and public disclosure of documented environmental and public and animal health risks. So does the more legitimate concern over China’s Huawei telecommunications company involvement in 5G and U.S. cybersecurity These risks need to be weighed against the benefits of having smart phones, meters, cities, WiFi, and telemedicine. The environmental costs, including loss of biodiversity (insects notably), contribution to climate change with escalating energy use, and effects on human behavior, anatomy and physiology are considerable. The World Health Organization in 2011 designated such radiofrequency radiation as a probable carcinogen in the same category as lead and DDT. The U.S. National Toxicology Program (NTP) reported cancers in test animals, (11, 12) some similar to those seen in humans, and the incidence of brain tumors in young people is in the rise. (13).

The NTP studies found that high exposure to RFR used by cell phones was associated with:

By Dr. Fox: Bringing Life to Ethics: Global Bioethics for a Humane Society

This book is Dr. Fox’s contribution to the evolution of ethical sensibility and moral maturity in our species and its diverse communities, perceptions and values today. It lays the foundation for an empathy and rights-based treatment of animals, and shows the links between human health and wellbeing and our efforts to start effective planetary CPR—conservation, preservation, and restoration of natural biodiversity, bioclimatic stability, and of the beauty and vitality of life around us on this Earth, Mother of us all. Published in 2001 by State University of New York Press, Albany, NY 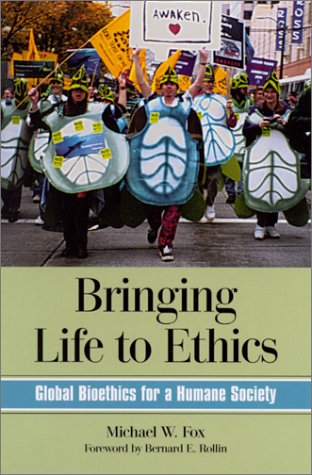