An “animal tracking bracelet” is being promoted for holiday gift giving.

One group offers the option of a bracelet, in partnership with Sea Turtle Conservancy, Save the Elephants, Track a Shark, or Track a Polar Bear.

“Every Sea Turtle Tracking Bracelet includes access to your very own Sea Turtle Tracking Page. [ ] you’ll get texted or emailed (your preference) a secret link to view your turtle tracking page. [ ] After the turtles are rehabilitated and ready for release into the wild, our partner [ ] tags the turtle with a GPS tracking device to monitor their recovery and study their migratory patterns. You will be able to follow along on a map to see where your turtle has traveled.”

“GPS tracking is the newest technology being used to track wildlife. In GPS tracking, a radio receiver, not a transmitter, is placed on the animal. The radio receiver picks up signals from special satellites. The receiver has a computer that then calculates the location and movement of the animal. The data gathered by the receiver is then sent to another set of satellites. The second set of satellites then sends the data to the scientists.”

The paradigm demonstrates something very significant about manipulation and human vulnerabilities.

A person wearing an animal tracking bracelet can experience a cascade of feel-good chemicals every time that they look at their wrist, or view the map of a turtle connected via a radio transponder to a satellite, beaming data to a cell phone on the other side of the world – even if the entire paradigm is destroying the health of the animal, other humans, and/or the planet.

Meanwhile, the tracked animal may not be feeling very good. In fact, the animals could be tortured by the technology (as some humans report).

We are conducting unprecedented, unsafe experimentation on nature with the imposition of telecommunications technology and data collection, because we haven’t addressed lying about safety.  Data collection isn’t facilitating more conservation, it is supporting more lies. One way wrongdoing and lying gains the upper hand occurs when innocent individuals are contributing to an effort in which they are intentionally compartmentalized and deceived.

They are not informed about the larger picture, via isolation, by design.

This dynamic was identified in 2012 by a PhD. candidate in Missouri. She exposed the history of the U.S. conducting horrific experiments on non-consenting, vulnerable populations, using ionizing radiation.

Her research has been published in the book, Behind the Fog. 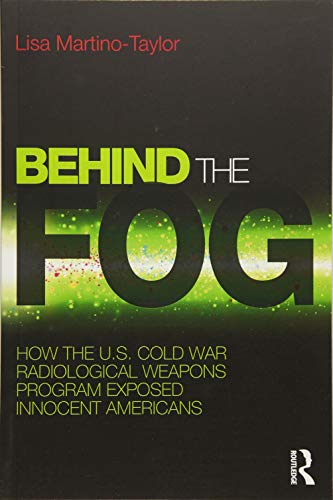 Decision-makers were told that the U.S. government was testing the use of aerosol fog defensively, as a “smokescreen,” to hide communities from attacks by Russian war planes.

Unsuspecting engineering students were used to disperse the sprays. As reported by the Seattle Times,

“About a decade ago, Lisa Martino-Taylor found that a small group of U.S. researchers, aided by leading academic institutions, were developing weapons using radioactive materials [ ].

[ ] “Unknowing people [] throughout the U.S., as well as parts of England and Canada, were subjected to potentially deadly material through open-air spraying, ingestion and injection” [ ]

Her book is a follow-up her 2012 dissertation, which found that the government conducted secret testing of zinc cadmium sulfide in a poor area of St. Louis in the 1950s and 1960s. [ ]

[ ] tests in Nashville in the late 1940s involved giving 820 poor and pregnant white women a mixture during their first pre-natal visit that included radioactive iron, Martino-Taylor said. The women were chosen without their knowledge. Blood tests were performed to determine how much radioactive iron had been absorbed by the mother, and the babies’ blood was tested at birth. Similar tests were performed in Chicago and San Francisco, Martino-Taylor said.” – Seattle Post

“One woman who witnessed this chemical test, Mary Helen Brindell, 73, remembers playing outside on her street when Army planes showered her neighborhood with a fine white substance. Brindell suffered from breast, thyroid, skin, and uterine cancers throughout her life. Her sister died of a rare esophageal cancer. The book also describes testing in Berkeley, Chicago, Rochester, NY, and Oak Ridge, TN, involved injecting unknowing patients with the radioactive isotope plutonium-239.” – Vintage News

This was not the first time that the US government authorized horrifying experiments on unsuspecting Americans.

And it is not the last.

In her book, Lisa Martino-Taylor identifies compartmentalization, where uninformed individuals are used as part of an agenda. They are also victims, who can unwittingly become perpetrators.

In the National Grid smart meter pilot program in Worcester MA, the utility boasted that they used college students to “wear the face of the community” – to lower the resistance to the perception that the program was run by an outsider corporation. The effort included converting a former bar into what became known as the “Propaganda Pub.” Residents were invited to see a display of smart home devices that they would most likely never be able to purchase in a lifetime.

The student ambassadors, who perceived that they were a select, distinguished group working on the front lines of climate action, were unwitting pawns.

Students at UNH Underwater Map Monterey Bay, CA and the Ocean Floor by 2030, Even If Sonar Destroys The Planet

“Our data shows that narwhals react to noise 20-30 kilometers away from a noise source by completely stopping their clicking sounds. And in one case, we could measure this from a source 40 kilometers away. It is quite surprising that we can measure how something so far away can influence whale behavior,” says Professor Susanne Ditlevsen of the University of Copenhagen’s Department of Mathematical Sciences. [] “Even when a ship’s noise is lower than the background noise in the ocean and we can no longer hear it with our advanced equipment, the whales can hear and distinguish it from other sounds in their midst. [ ]  their behavior is clearly affected.”- Phys.org

“Nonethless,” the Saildrone Surveyor vehicle will provide the power, speed, and payload required to carry a Kongsberg EM 304 multibeam sonar. The Surveyor will collect detailed mapping of the seafloor and water column, which will be transmitted back to shore in real time. [ ] Over the past five years, Saildrone USV’s have performed extensive missions in the Arctic, Antarctic, and Pacific and Atlantic Oceans, proving it to be a capable and effective vehicle for collecting data in the most extreme environments. Seabed 2030 is a UN-backed joint initiative between GEBCO and the Nippon Foundation to produce a definitive map of the world ocean by 2030.”

Compartmentalization: Saildrone Data Analyzed In New Hampshire About the Ocean Floor In Monterey Is Not Informed by Decades-Old Research Showing Profound Harm to Ocean Mammals From Sonar

The Wildlife Collection states that, “By combining a tangible bracelet and interactive tracking experience, our goal is to educate customers about wildlife and excite them about conservation.”

Sonar, and tracking as an “exciting” form of conservation, is an un-survivable untruth.

– “Martino-Taylor’s 2012 report on testing in St. Louis was troubling enough to trigger an Army investigation. The investigation found no evidence that the St. Louis testing posed a health threat.”

– “In 2008, CNA re-interpreted the whale stranding data. ‘Ultimately, our analysis found no correlation between Navy exercises and whale strandings in the Southern California area.'”

-“In 2012, the National Council of State Legislators published a report from the Utilities Telecom Council claiming no adverse effects from smart meters.”  The quoted experts are tobacco scientists.

Nature and “Climate” are not the threats. We are.

As we cross the 2022 solstice return to light, it is time for a sea change.