The EMF Scientist Appeal to the United Nations states,

We are scientists engaged in the study of biological and health effects of non-ionizing electromagnetic fields (EMF). Based upon peer-reviewed, published research, we have serious concerns regarding the ubiquitous and increasing exposure to EMF generated by electric and wireless devices. These include–but are not limited to–radiofrequency radiation (RFR) emitting devices, such as cellular and cordless phones and their base stations, Wi-Fi, broadcast antennas, smart meters, and baby monitors as well as electric devices and infra-structures used in the delivery of electricity that generate extremely-low frequency electromagnetic field (ELF EMF).”

“As a leading expert on the health effects of electromagnetic radiation, Dr. Blank was a strong advocate for the use of science to create a better and healthier world.

Throughout his lengthy career, Dr. Blank published over 200 papers and reviews, authored numerous books, held appointments at 11 leading universities around the world and the US Office of Naval Research. He also organized and led many meetings, including two World Congresses on Electricity and Magnetism in Biology and Medicine, and he started the Gordon Research Conferences on Bioelectrochemistry. He has been Chairman of the Organic and Biological Division of the Electrochemical Society, President of the Bioelectrochemical Society, President of the Bioelectromagnetics Society, and has been on editorial boards of Journal of the Electrochemical Society, Bioelectrochemistry and Bioenergetics, Electromagnetic Medicine and Biology. In 2014 his book, ‘Overpowered’ (7 Stories Press), which summarized his findings regarding the potential dangers of electromagnetic radiation, was published. 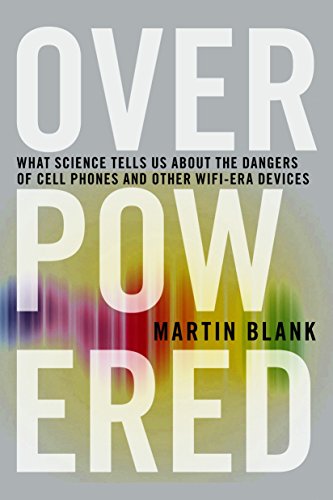 Through his work, Dr. Blank established himself as one of the strongest voices globally in the quest to better understand and regulate the health effects of electromagnetic fields.

Dr. Blank was born in New York in 1933 as the child of immigrants, Leon and Rebecca. English was the third of five languages in which he became fluent.

An early interest in science led him to be accepted to the Bronx High School of Science, after which he proceeded to complete two PhDs: one in physical chemistry from Columbia University, and a second in colloid science – an interdisciplinary field involving chemistry, physics, and nanoscience – from Cambridge University.

In his early career, he studied the biological membranes that encase living cells and the effects of electric fields on such membranes. In 1987 he read a paper by Dr. Reba Goodman, a colleague at Columbia University, that suggested everyday EMFs like power lines and electrical appliances had an effect on living cells. At that time, only ionizing forms of radiation like X-rays were acknowledged as harmful to humans.

Intrigued, Dr. Blank approached Dr. Goodman about her findings and initiated what was to become a long and fruitful scientific partnership. Though their research contradicted the accepted paradigm of the day, they continued to push boundaries, demonstrating observable, repeatable health effects of EMF on living cells.

Their results were published in numerous peer-reviewed journals and were subsequently confirmed by other independent scientists around the world.

Dr. Blank’s research into EMFs repeatedly showed that non-ionizing radiation does affect human cells. He believed that it would be in our best interest to take stronger precautions, as a way of securing a healthier future, and that there would be nothing to lose by taking such action.

‘You take a certain amount of precaution as a result of a risk that has been identified,’ Dr. Blank said at the 1st public forum in the U.S. on EMF effects on Children, Fetuses, and Fertility in 2013. ‘The risk can turn out to be a false alarm, in which case you haven’t lost anything really; what you’ve done is prevented damage that might have occurred might it have been so.’

He wrote letters to schools, companies, and government bodies – ardent letters laying out solid research-backed reasons why they should take precautions around EMFs; not chiding them for their practices but giving them helpful council on what they could be doing to better protect the community.

In 2015 he led a publicized appeal to the United Nations and World Health Organization, calling for greater attention to the health risks of EMFs. 190 scientists from around the world took part in the appeal, unified in their beliefs that the scientific research around electromagnetic radiation was not only compelling but urgent.

‘My message… is not to abandon gadgets—like most people I too love and utilize EMF- generating gadgets,’ he wrote in his 2014 book, Overpowered. ‘Instead, I want you to realize that EMF poses a real risk to living creatures and that industrial and product safety standards must and can be reconsidered.’

Throughout his career, Dr. Blank held many leadership roles — including terms as President of the Bioelectrochemical Society, and Chairman of the Organic and Biological Division of the Electrochemical Society — gave hundreds of speeches and lectures, edited various journals, and sat on the organizing committees of numerous conferences and world congresses. Dr. Blank also had a knack for translating complex scientific concepts into a language anyone can understand. His rigorous research reports generally served the scientific community and his 2014 book Overpowered (7 Stories Press) offered all readers, inaccessible and captivating prose, the information they needed to better protect their health. In this way, his work has had a broad impact, reaching the general public as well as his many pupils, colleagues, and the scientific community.

He will be remembered as someone who fought against the private, profit-driven efforts of industries to obscure information from the public; and as someone who welcomed genuine discussion and criticism as catalysts for true scientific progress. The goal of Dr. Blank’s work was not to generate fear or cause alarm but to use rigorous and objective research to get closer to the truth. And, ultimately, to use this truth to secure ourselves, and future generations, a healthier future.”

When a skillful, informed host speaks with a gentleman, scholar, and great communicator, as Andre noted at the end of the interview with R. Blank, listeners are in for a treat.

This talk, linked below, is an accessible introduction for those new to the topic of EMF/RF, but also a very calming and inspiring overview for those already engaged in the topic, and a lovely introduction to Andre and R.  As R notes, “don’t get terrified!” There is a lot you can do in your house, where you spend a great deal of time.

André Fauteux provided an introduction to the work of Martin’s son, R Blank.

“Technologist R (Ari) Blank is CEO of Shield Your Body which creates products that make it easy and affordable for people to reduce their exposure to wireless radiation from devices like cell phones and laptops. He cowrote the book Overpowered – The Dangers of Electromagnetic Radiation with his father Dr Martin Blank (1933-2018), former President of the Bioelectrochemical Society and of the Bioelectromagnetics Society.

An associate professor of physiology and cellular biophysics at Columbia University, NIHS researcher coauthor of the BioInitiative report, Dr Blank was an advisor and spokesperson to the International EMF Scientists Appeal. In the Appeal video, he warned that wireless technology causes cellular DNA damage, silently harming the public and the environment.

R became an EMF mitigation entrepreneur following a 20-year career in software development for bluechip firms including Apple, NBC, Disney, Microsoft, the NFL, IKEA and Mattel. R also co-founded Wildform where he co-created the first video encoder for Flash (sold to Google). He has served on the affiliate faculty at the University of California, Santa Cruz in the Digital Arts and New Media (DANM) program, and previously on the faculty of the University of Southern California Viterbi School of Engineering.

Additionally, R has authored numerous articles, videos, courses and books in technology and software development. R has an MBA in Entrepreneurship from UCLA Anderson School of Management and an undergraduate degree from Columbia University.”

Here is an interview with Ari, conducted by André Fauteux of La Maison du 21e siècle.

EMF Mitigation with R Blank of Shield Your Body

Speaking of a mercenary liar-for-hire, someone noted, “Where corruption flows, this guy goes.”

“He will be remembered as someone who fought against the private, profit-driven efforts of industries to obscure information from the public; and as someone who welcomed genuine discussion and criticism as catalysts for true scientific progress.”

We are living in the Dark Age of unrestrained techno-worship.

As mentioned in our previous series on the militarization of RF/EMF/5G, this is why turning off one’s Wifi at night, or rejecting a smart meter or 5G phone, and protecting the health-vulnerable neighbor, becomes a radical act, of caring and response-ability, for ourselves and those we love.