Do You Consent To Color of Law? Color of law refers to an appearance of legal power to act that may operate in violation of law. Appearances can be deceiving.

In his book, The Color of Law: A Forgotten History of How Our Government Segregated America, author Richard Rothstein, a leading expert on housing policy, describes the myth that cities came to be racially divided through de-facto segregation, that is, through individual prejudices, income differences, or the actions of banks and real estate agencies.

Rothstein makes clear that it was laws and policy decisions by local, state, and federal governments that directly promoted the discriminatory patterns. From racial zoning in the 1920s to urban planning of the 1950s, to federal subsidies to builders not to build homes for Blacks, it was plain, open discrimination, sanctioned by government, that violated laws that continue unabated today.

The color of law is a cover of law. 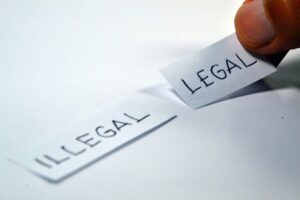 Color of Law operates today by unlawful mandates and Emergency Orders, which serve one purpose: to allow one group of people to abolish your inherent rights. Remember, no one has more rights than anyone else.

No school, no store, no bank, no library, and no governor can make any order or policy that violates  your rights under Natural law. Natural laws are determined by fundamental forces within Nature.  Natural law supersedes all other laws, including man’s laws. The Constitution is codified based on the Universal law that no man has the right to rule over another man, which will always be the truth from the day of birth to the day of death. Natural Law is based in two principles: Truth and Do no harm.

Natural Law is based in principles of truth about the reality we live in. Principles are first and foremost, at the root, the most necessary and important, a foundation to build upon. The word “principle” expresses Natural Moral Law in the very way we use the word itself, such as “in principle” and “on principle”. Natural Law is an essential property of existence; it is born into being and is forever there in our reality without human causality. Our goal is to put these principle first-things first in our lives, to recognize and align with them because they are based in truth, not belief. Man’s society is not putting original, generative, beginning, foundational principles first, but trivialities, lies, and deception. Therefore, Natural Law is not man’s law.

What you need to know in 8 easy steps:

Deprivation of Rights Under Color of Law

Section 242 of Title 18 makes it a crime for a person acting under color of any law to willfully deprive a person of a right or privilege protected by the Constitution or laws of the United States.

For the purpose of Section 242, acts under “color of law” include acts not only done by federal, state, or local officials within their lawful authority, but also acts done beyond the bounds of that official’s lawful authority, if the acts are done while the official is purporting to or pretending to act in the performance of his/her official duties. Persons acting under color of law within the meaning of this statute include police officers, prisons guards and other law enforcement officials, as well as judges, care providers in public health facilities, and others who are acting as public officials. It is not necessary that the crime be motivated by animus toward the race, color, religion, sex, handicap, familial status or national origin of the victim.

The offense is punishable by a range of imprisonment up to a life term, or the death penalty, depending upon the circumstances of the crime, and the resulting injury, if any.

If you understand that a government cannot abolish rights which it has no ability to grant in the first place, then you are armed with enough knowledge to begin the process of calling out the facade when you see it practiced. Each success brings confidence for future successes. Humanity, as a whole, moves from oppression to expression, from tyranny to freedom.

Christopher Key, a man who had enough of unlawful dictates, stood up to the Jefferson County School Board in Alabama, and called them out.

Pro Se litigant Luis Ewing shares information on maintaining your rights of public accommodation (without masks and medicines) based on religious discrimination, and violations of the state and federal constitutions under the 1964 Civil Rights Act pursuant to Title 42 Section 1983.

Texan, Randall Kenton sued the Texas Governor by name, in court, causing the governor to rescind the State mask mandate, allowing all bars and restaurants to reopen at full capacity. Twenty state governors followed suit, lifting their own mandates out of fear they would lose their insurance for fraud. See the complaint filed that could be used as a template anywhere.  Health officials continued to recommend wearing a mask based on “personal responsibility” but no law: another example of Color of Law.

These people do not win by a belief. They win by a knowing. They know who they are. By holding their positions and protecting their rights, not only are they showing personal responsibility, but they are an example for others. 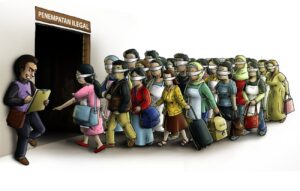 What Christopher Key and others are showing is that when you reveal that a FRAUD has been perpetrated, and you follow it up by naming names, the perpetrators stand down. Behind all corporations are names of men and women. In general, suing corporate entities does nothing for the greater good, and never has. Corrupt companies, such as Pfizer, may be found criminally liable and fined in court over and over, but they continue to operate and to cause harm. However, going after individuals by name affects their pocketbooks.

No individual governor or prosecutor or judge or school board member wants their insurance rates to go up or to be dropped by insurers. Push just a little and the game has suddenly changed in the peoples’ favor.

Illegal, unlawful, and immoral acts are not only reprehensible but are also a violation of your Natural rights, as expressed in the American Declaration of Independence, and as reflected in the national and state constitutions. If you are the subject of intimidation or coercion by agencies or governments or schools or employers, forcing a medical experiment upon you as a condition to participate in society, your rights have been trampled.

Why do the majority of people become subservient to lawless authorities without any evidence of a clear and present danger? Why do people refuse to stand up for their rights and freedoms? Why do people believe they do not have a choice when it comes to forced muzzles or forced medicines when they do?

Because the majority of people have been indoctrinated through the 15,000-hour public school system and programmed by the Tel-A-Vision to not think for themselves. They have been conditioned to accept government handouts that create co-dependence. They have been dumbed down and emasculated to accept a master outside themselves.

What if accepting stimulus handouts increased the federal debt to bankrupt a nation, which amounted to a federal crime? What if knowing that a national bankruptcy could be the excuse used to reset the debt credit currency system to a Crypto credit system with your body as collateral?

What if this whole scenario already happened during the 1918 Spanish flu pandemic where masking was found to be the cause of secondary pneumonia and an invisible virus became the tool to test society? The Great Depression followed the Spanish flu and a new system was established to enslave people using the birth certificate and social security system. From the Great Depression to the Great Reset, an invisible virus that never existed was blamed. Government promised people benefits and privileges in exchange for their rights. For more details, read Recycling the Spanish Flu Pandemic.

No government. No business, no medical professional, no school, and no employer can require or mandate ANY medical treatment or intervention, including injections or face coverings that block your ability to breathe freely. To require any injection as a condition to participate in society is unlawful coercion according to state law.

Use State Law In Your Favor

You can use state law in your favor. In California, Peggy Hall of thehealthyamerican.org teaches people how to protect their rights using the State Constitution and business codes. She provides documents on her website that you can print and carry with you, such as the right to public accommodation, as well as tools against discrimination. According to California Law:

24170: This is the Protection of Human Subjects in Medical Experimentation Act
24171: The Legislature hereby finds and declares … the right of individuals to determine what is done to their own bodies.
24172 This is the “experimental subject’s bill of rights,” and states that individuals…

(j)  Be given the opportunity to decide to consent or not to consent to a medical experiment without the intervention of any element of force, fraud, deceit, duress, coercion, or undue influence on the subject’s decision.

In the Minnesota Constitution, Article I, Section 16 says:

Sec. 16. FREEDOM OF CONSCIENCE; NO PREFERENCE TO BE GIVEN TO ANY RELIGIOUS ESTABLISHMENT OR MODE OF WORSHIP. The enumeration of rights in this constitution shall not deny or impair others retained by and inherent in the people. The right of every man to worship God according to the dictates of his own conscience shall never be infringed; nor shall any man be compelled to attend, erect or support any place of worship, or to maintain any religious or ecclesiastical ministry, against his consent; nor shall any control of or interference with the rights of conscience be permitted, or any preference be given by law to any religious establishment or mode of worship; but the liberty of conscience hereby secured shall not be so construed as to excuse acts of licentiousness or justify practices inconsistent with the peace or safety of the state, nor shall any money be drawn from the treasury for the benefit of any religious societies or religious or theological seminaries. 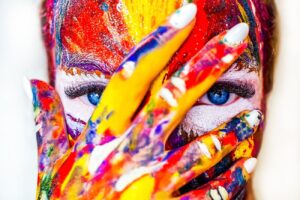 Shakespeare wrote, All the world is a stage. This is why appearances can be deceiving. In this world of appearances, you can separate yourself from the crowd. Do you beg for rights from government? Do you know who you are? Do you know where you live?

You live in your body. Therefore, you have inherent rights. Your rights include the right to say NO to deception. You can say NO CONTRACT. I DO NOT CONSENT to any offer, contract, testing, treatment, intervention, or injection. Ask them to show you the laws. Man’s laws compel artificial or legal PERSONS, but do not compel you. Know the difference. And think twice before signing your name.

You are not subject to masters unless you are a subject. You are not a slave unless you accept a master outside yourself. You have the power to shift the direction and devolution of humanity by taking responsibility for your actions.

Simply know who you are.

The Liberty of man consists solely in this, that he obeys the Laws of Nature, because he has himself recognized them as such, and not because they have been imposed upon him externally by any foreign will whatsoever. – Mikhail Bakunin