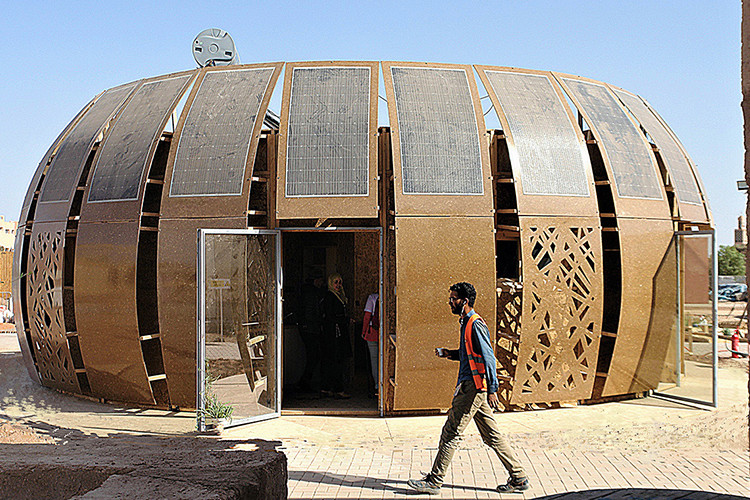 A team of students in Morocco have successfully developed an environmentally sustainable home made almost exclusively from hemp and solar panels.

The building was erected as an entry into the SUNIMPLANT project’s ‘Solar Decathlon’, a competition organized by the United States Department of Energy and Morocco’s Centre de recherche en Energie solaire et Energies nouvelles to encourage construction of solar-powered buildings.

This design is unique and was built from only locally sourced hemp, vegetable-based bio-resins, and other non-synthetic materials found in the region.


“This ‘spaceship’ is advanced in time and reflects a turn not only in North Africa but in hemp construction, which doesn’t have comparable prototypes anywhere in the world.” — Monika Brümmer, German Architect and Project Leader

Monika is also the co-founder of Adrar Nouh, a Spain-based NGO with a focus on using hemp to build environmentally sustainable homes in Morocco’s poor and rural High Rif region.

The spherical home spans 90 square meters (approximately 969 square feet) and features 24 photovoltaic solar panels with a total price tag of only $120,000. The structure actually costs less than half of the most expensive entries in the competition.

According to Brümmer, the building could be optimized even further if hemp-clay boards were installed as internal partitioning walls and floors. Although funding restrictions did partially obstruct their original goal, the home features some interesting innovations such as hemp wool-derived panels which protect the underside of the solar panels against extreme weather conditions, an important inclusion for a region which reaches up to 114°F in the shade during August and September.

Monika’s building offers the opportunity of an entirely off-grid experience, unencumbered by the need for outside electricity while maintaining the comfort of a modern lifestyle.

“The cylindrical envelope of the circular building, with minimal exposure of the 24 exterior panels, gives interior comfort through optimal damping and thermal phase shift, and osmosis of the components in the hempcrete formulation,” said Monika Brümmer, as reported by Hemp Today.

The product also has the potential to be carbon-neutral, but US-based growers tend to focus on growing hemp for CBD and other compounds instead of hempcrete, which requires taller and more fibrous hemp stalks.

Despite technical difficulties, this Moroccan ‘hemp house’ shows the world that environmentally sustainable construction is possible.

This article (Moroccan Students Build Off-Grid ‘Hemp House’ Made Almost Entirely from Hemp and Solar Panels) as originally created and published by Waking Times and is published here under a Creative Commons license with attribution to Phillip Schneider and WakingTimes.com. It may be re-posted freely with proper attribution, author bio, and this copyright statement.