In early 2019 we reported on how capitalism was reaching out into the night sky as high-tech advertisers were planning on developing technology that would display giant sky advertisements over major markets.

Apparently, Elon Musk is now leading the race to monetize space, as his Starlink project is live, and is polluting the night sky with trains of bright satellites for the supposed purpose of bringing 5G internet to the world.

In 2018, Musk appeared on the Joe Rogan show, toked a big spliff and rapped with Joe about the state of technology and where it was going. If you recall, he made a few concerning statements regarding his failed efforts to help usher in an era of responsible technological progress, but said that no matter who he talked to in government and industry, it seemed to be a foregone conclusion that technology was going to be developed and used primarily to enslave people and steal their mental sovereignty.

Fast forward a year and Musk’s Starlink program is fulfilling that dystopian warning by filling the night sky with 5G satellites.

Starlink is the name of a satellite network that the private spaceflight company SpaceX is developing to provide low-cost internet to remote locations. While SpaceX eventually hopes to have as many as 12,000 satellites in this so-called megaconstellation, the size and scale of the project have flustered astronomers and amateur skywatchers, who fear that the bright, orbiting objects will interfere with observations of the universe.

“We’re really talking about something which is, in the long-term, like rebuilding the internet in space,” Musk said during a speech in Seattle when revealing the project. [Source] 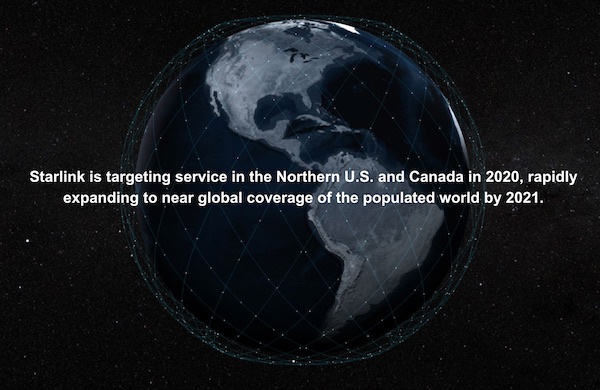 Videos of Musk’s new insane network of 5G satellites are showing up on the internet, giving us a look into the future when corporations and governments can do anything they want to our world without any input from the billions of people and animals whom walk this great, green earth.

These low-orbit satellites not only already contaminate our night skies and interfere with astronomy but also promise to flood Earth with powerful, focused electromagnetic beams that emit radiofrequency (RF) and microwave radiation proven to adversely affect the health of humans, animals and plants. The satellites also may have an impact on Earth’s natural electromagnetic field—essential to all life on our planet—yet no national or international agency has taken action to evaluate, reduce, prevent or publicize the environmental impact of the satellites’ emissions. [Source]

This video shows them over Europe:

Here they are over the Netherlands:

Here is a more distant view:

And here’s one over Switzerland from a few days ago:

Already, Musk is having to address the fact that the satellites are so bright that they are affecting astronomy, promising to dim them somehow. While this is fine and dandy, it does nothing to address the fact that most people would rather not have the sky polluted at all, and that others would prefer not to live under a blanket of 5G radiation and all of the surveillance and invasion of privacy this brings with it.

Looking at this you really can’t help but wonder if all of this really just to bring the internet to people who can’t get it, or if something bigger is in play here.

This article (WATCH: Elon Musk’s Dystopian Nightmare of 5G Satellites Encircling the Globe is Already Here) was originally created and published by Waking Times and is published here under a Creative Commons license with attribution to Vic Bishop and WakingTimes.com. It may be re-posted freely with proper attribution, author bio and internal links.