Plastic pollution has been haunting the planet for a long time. We may have realized the devil that plastic is quite recently, but we are also trying to bring the use of plastic to a halt. In Australia, a teenager has taken up this battle against plastic, too, and she has come up with a new solution – prawn shells.

The 17-year-old, Angelina Arora, has been able to produce compostable plastic using prawn shells. This kind of plastic can decompose within 33 days. Her amazing invention has been praised in Australia, too. She has earned a BHP Science and Engineering Award. She was also named the Australian Geographic Society’s Young Conservationist of the Year.

Angelina has mentioned that she is in the final talks regarding acquiring a patent over the compostable plastic. However, she has built the final prototype, and it will soon be ready for commercial distribution. The best part – the compostable plastic is quite cheap and can be used for various purposes. She has been in talks with many companies, and they have found the product promising. It is insoluble, flexible, and durable – the most necessary things desired from plastic.

The product has been developed by mixing a protein from a silk cocoon and an element from prawn shells, which was able to create this compostable plastic.

Angelina is a medical student and is testing out the product as medical packaging, too.

Angelina was inspired to make such a product after she saw that her parents had to pay for plastic at the stores. She became curious and asked about the reason, only to learn that plastic harms the environment. So, she wanted to make a cheap substitute. She loved science and experiments, so she enrolled herself in the science field. 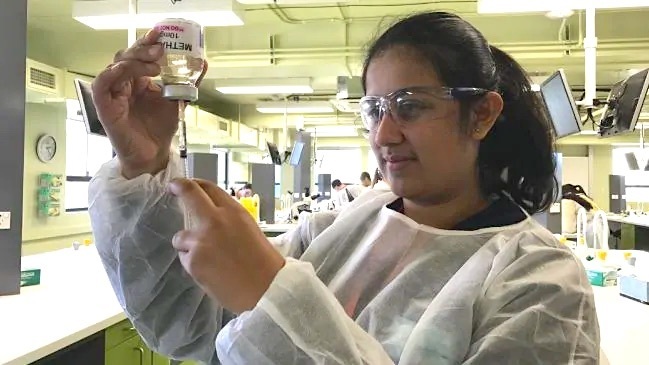 To reach her goal, Angelina conducted a few experiments. At first, she tried to make the plastic using organic materials like banana peels and cornstarch, but solubility became a factor for them. While having her dinner, she noticed that prawn shells have a plastic texture to them and that’s when the plan started to form. She started researching the shell and extracted carbohydrate chitin from it. She then used chemicals and transformed the carbohydrates into chitosan. Angelina then mixed the chitosan with fibroin, an insoluble protein found in silkworms. Thus, the new compostable plastic was formed which broke down in just 33 days.

She knew that her age might be seen as a barrier, but she did not think of it like that. For her, age is just another number. She kept on with her research, and in due course, she gained success.

She mentioned how her generation was slowly finding the voice to shout out against plastic pollution and climate change.

A YouGov study, which was commissioned by the Marine Stewardship Council, looked at about 1000 young people within the ages of 18-24, and they found out that they were most concerned about the environment and its impact on marine life. Anne Gabriel of Marine Stewardship Council mentioned that oceans are the only wild food source left for us and if we don’t plan to preserve it, our next generation would suffer.

Maybe heroes like Angelina can save the world along with our help.