The Modern Myth of Health According to casual conversation, most people are convinced they will live 100 years. The irony is, that in one breath Americans talk about long-life expectancy, while in the next they commiserate about chronic disease symptoms and their list of drug prescriptions. If they are so focused on disease, are they really that healthy?

Today, the average American live span of 79 years is comparable to that of the Victorian Era (1837 to 1901). It is a myth that people dropped dead at 40 in the mid-1800s. Today’s chronic diseases were extremely rare for the Victorians. If Victorians lived today, they would tell it like it was.

For instance, they might say that women did not swoon in the parlor during their periods. They used a T-bandage. They would say plainly:

“We had diapers… they weren’t very comfortable… you’d have to shape it, fold it over, just as you put on a baby.”


In the 19th century, women had duties and a schedule to keep in the home. Discussion of feminine hygiene was likely taboo since not much is written on the subject. What was written is that the Victorians were healthier and lived longer, often working until the day they died; providing they survived the first five, vulnerable years. They would tell us that historical records have been greatly distorted.

The Victorians had stronger immune systems. They lived, ate, and died in rural communities, worked long days, and ate 2000 more calories a day to sustain themselves. Obesity was virtually unknown except in the upper-middle and wealthier classes. They consumed less sugar, alcohol, and tobacco. And they lived without modern diagnostics and medical treatments. Health was credited to a spiritual, not medical, lifestyle.

A clue to their success? The mid-Victorian era, between the years of 1850 and 1872, was a ‘golden age of nutrition.’ “They typically ate eight to ten portions of fruit and vegetables daily,” in a nutrient-dense diet of real food. They ate seasonally and locally. They ate organ meats (brains, heart, liver, kidneys, and ‘pluck’), fatty fish, and prebiotic foods (including onions, garlic, Jerusalem artichokes, dandelion greens, and leeks). They ate less salt (except to preserve corned beef), sugar, alcohol and tobacco. They never heard of processed or refined foods.

Unlike life in Victorian times, Americans today habitually expose ourselves to chemicals and toxic metals in what we eat, drink, breathe, apply, insert, implant, and inject. Today, 2 out of 5 Americans, or 32 million people, have at least one chronic disease. Chronic diseases are the major causes of illness and death across the globe. And while the U.S. has the most expensive healthcare system in the world, we are far from the healthiest.

Today in America, the modern ideal of Health is a myth that contradicts published reports:

The Institute of Medicine’s 1999 report To Err is Human, estimated some 100,000 Americans die each year from preventable adverse events. An adverse event is any unfavorable and unintended sign, symptom or disease associated with the use of a medical treatment or procedure that occurs during the course of a study. A serious adverse event includes any untoward medical occurrence that results in death, is life threatening, requires inpatient hospitalization, results in persistent or significant disability, or leads to a congenital anomaly or birth defect.

The Starfield Report of 2000, published in the Journal of the American Medical Association, cited western medicine as the third leading cause of death, including 2038 deaths per week from prescription drugs alone. If science is the backbone of evidence-based medicine in this country, then what does the medical science tell us?

The editor in chief of The Lancet, one of the world’s most distinguished medical journals, published a statement suggesting that much of medical literature is false:

“The case against science is straightforward: much of the scientific literature, perhaps half, may simply be untrue. Afflicted by studies with small sample sizes, tiny effects, invalid exploratory analyses, and flagrant conflicts of interest, together with an obsession for pursuing fashionable trends of dubious importance, science has taken a turn towards darkness.”

In a 2013 report in the Journal of Patient Safety, preventable medical errors persist as the No. 3 killer in the U.S. – third only to heart disease and cancer – claiming the lives of some 400,000 people each year at a cost of $1 trillion each year.

“What these numbers say is that every day, a 747, two of them are crashing. Every two months, 9-11 is occurring…we would not tolerate that degree of preventable harm in any other forum.”   – Peter Pronovost, MD, Senate Hearing July 16, 2014

The 2013 U.S. Health In International Perspective report shows that Americans are living less long in poorer health at all stages of life. And this is not news. The trend has been alive for at least one hundred years.

According to the 2014 Mirror Mirror Report by the Commonwealth Fund, the US underperforms in most aspects of healthcare among 11 industrialized nations. We Americans live shorter lives and experience more injuries and illnesses than those in other high-income countries.

The National Research Council and World Health Organization reported that Americans, for many years, have had shorter life expectancy that their peer countries, and are less healthy in the at all stages of life, from infancy to childhood to adolescence to young adulthood to middle and old age.

The U.S. health disadvantage spans many types of illness and injury yet the report uncovered no single cause for these findings and offered no call to action. Americans as a group fare worse in at least nine health areas:

If our future is our children and their health, how does it break down for the children?

Autism reflects our future state of health. Autism is not a one-size-fits-all diagnosis. It is expressed in children on a spectrum from ‘mild to severe,’ and clinically as neurological and gastrointestinal toxicity.  A review of U.S. studies found that prevalence increased 10-fold between the 1970s and 1990s, from less than 3 cases per 10,000 children to over 30 cases per 10,000 children. The U.S. CDC also found rising cases throughout the 1990s. Today, the autism spectrum has risen to 1 in 32 children in our modern era. Researcher Dr. Stephanie Seneff, phD estimates that number will rise to 1 in 2 by 2025.

If vaccines are miracles of medical science that have eliminated infectious disease outbreaks of the Victorian era and prior, why does a 2014 report released by the Council on Foreign Relations (CFR) show the opposite? The CFR map identifies countries with the highest infectious disease outbreaks are the most highly vaccinated populations around the world. This was especially true for measles, mumps, rubella, polo, and pertussis outbreaks. The US, Canada, the EU, Australia, New Zealand and Japan– each with the highest number of mandated vaccines – as well India and Africa where GAVI implemented vaccine campaigns, led the list of nations. South America is almost void of any communicable disease dots. 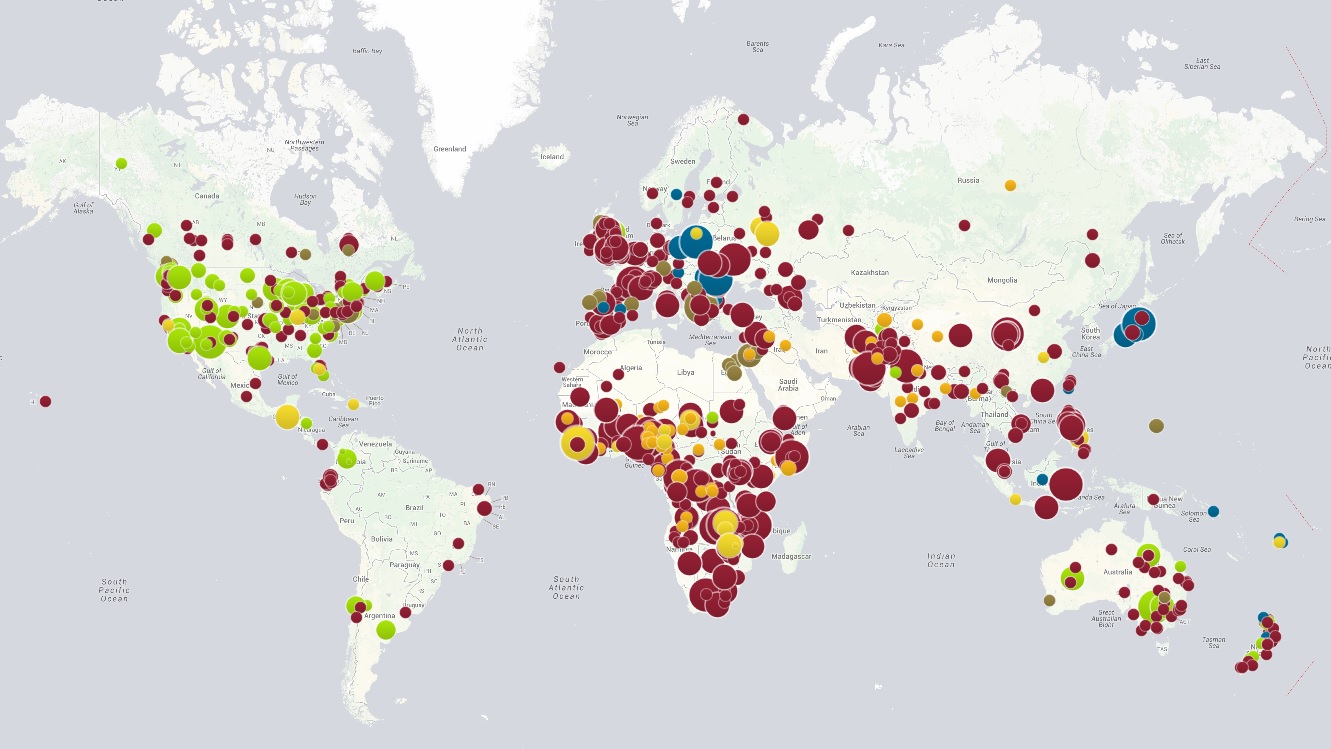 In the U.S., Missouri, the state with the highest vaccination rate, and strictest mandates, also has the highest infant mortality rate, as reflected by this graphic depiction. 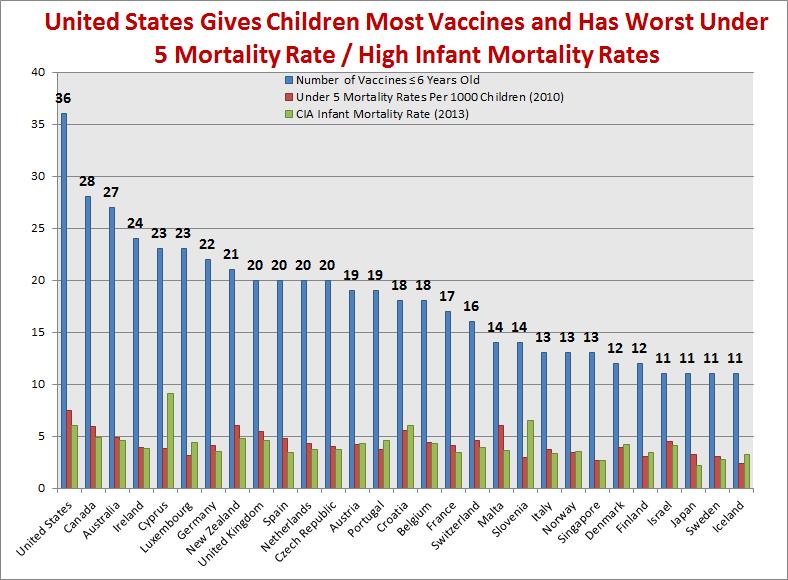 Where have we gone wrong?

Has living in a sterile, “modern day” bubble sabotaged our immune systems beyond repair? Have we trusted the wrong people? Has the vaccination program, with its promise to eliminate infectious disease instead increased outbreaks through vaccine viral shedding? Have processed, refined, genetically-modified foods left us vulnerable at all ages?

An infant’s immune system begins to grow and develop when it comes into contact with bacteria, viruses and fungi and can wage an attack against them, as nature intended. A child’s immune system develops over time, some say up to twelve years. Yet, infants, beginning on day 1, are given their first vaccines. The childhood vaccine schedule has never been scientifically tested for safety or effectiveness, yet requires a child to take 74 doses of 53 injectable vaccines by age 17. Is that science or negligence?

We roll up our sleeves to “injectables” that contain a concoction of chemicals, nanometals, antibiotics, viruses, monkey or dog kidney cells, and carcinogens that few would consider drinking.

Vaccines require boosters since they do not provide real immunity. Vaccines promote B-cells (antibodies) which suppresses a full-body (T-cell) long-term, innate immunity. Even though vaccines fail to provide real immunity, the adult schedule is being readied to “keep Americans healthy,” The Healthy People 2020 Act.

In our progress as a science-savvy species, we continue to experience high infant mortality rates and continued outbreaks of infectious disease like the Victorians of their time. Yet we have added chronic disease to the mix. Modern foods and medicine have replaced nutrition, spirituality, and nature. Blind obedience and mandates have replaced choice and consent.

Return to Victory In Health

If Victorians time-travelled to our time, would they question why so many Americans over 60 years old wear diapers, need walkers, and live in nursing homes? Would they advise us to reevaluate what we accept as truth from those we consider “experts.” Would they travel back to their time?

What if returning to the Victorian ideal only means eating nutrient-rich, unrefined, non-GMO, organic foods, moving your body, moderating alcohol, embracing your gut microbes, and going back to Nature? What if returning to victory in health means challenging the myth of health, asking questions, and questioning our definition of progress? Returning to the past in mind, body, and spirit, may be the only way to preserve our species going forward.