Brazil Court Suspends Glyphosate; What About Doing That, EPA & FDA? A Brazilian judge has suspended the use of products containing the agrochemical glyphosate, a widely employed herbicide for soy and other crops in the country, according to legal filings. (Source)

Why would a judge in Brazil take such action, when regulatory officials in the USA think glyphosate is harmless?  Probably because Monsanto and Bayer lobbyists can’t get near Brazilian judges?

All the above mentioned that last month a federal judge in the USA ruled hundreds of lawsuits against Monsanto by cancer survivors or their families could proceed to trial. (Source)

Those lawsuits apparently will be heard by juries of peers, so let’s see what happens.

Furthermore, the International Agency for Research on Cancer (IARC) of the World Health Organization concluded on March 25, 2015 that glyphosate probably is carcinogenic.

What were the results of the IARC evaluations?

The herbicide glyphosate and the insecticides malathion and diazinon were classified as probably carcinogenic to humans (Group 2A). (Source) 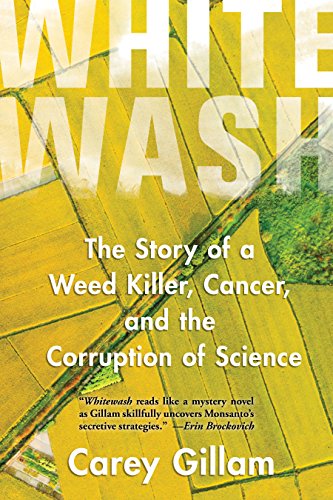 Whitewash: The Story of a Weed Killer, Cancer, and the Corruption of Science
Price: $32.00

And yet those who should know better use it like water!  Years ago, I had a neighbor who sprayed it almost constantly and then died of kidney cancer!

One of the biochemistry issues everyone probably does not take into consideration is the combined toxicity and biochemical effects of glyphosate and other chemicals it is combined with, which can become more seriously toxic in living organisms, e.g., humans and plants.

Glyphosate residues have been found in most commercially-produced, packaged grocery store foods [1].  It’s been found in vaccines [2]! It pollutes wells and drinking water [3].

What is it consumers, homeowners and others don’t get about this toxic agrichemical?

How Toxic is the World’s Most Popular Herbicide Roundup?

Two of Catherine’s more recent books on Amazon.com are Our Chemical Lives And The Hijacking Of Our DNA, A Probe Into What’s Probably Making Us Sick (2009) and Lord, How Can I Make It Through Grieving My Loss, An Inspirational Guide Through the Grieving Process(2008)