In a powerful essay for Environmental Health News entitled “Monsanto’s Ghostwriting and Strong-arming Threaten Sound Science – And Society,” Sheldon Krimsky has blown the lid off a number of Monsanto scandals that have been buried in the mainstream corporate news per business as usual. Krimsky is a Lenore Professor of Humanities and Social Sciences and Adjunct Professor of Public Policy and Community Medicine at Tufts University. He also the co-author of a study with Carey Gillam in which the two analyzed thousands of pages of internal Monsanto documents. Their study, along with a study by Leemon McHenry, has revealed massive amounts of corruption between Monsanto and academia.

The most recent examples of that corruption can be evidenced by looking at “discovery documents” which were released under the mandate of the courts as a result of a number of product liability lawsuits filed against Monsanto. In fact, there have been thousands of lawsuits filed against the corporation with the litigants arguing that they have contracted cancer after using Roundup. The lawsuits argue that the company knew full well that its product caused cancer but actively attempted to cover it up.

In Krimsky’s own study conducted and published in the Journal of Public Health Policy (Roundup litigation discovery documents: implications for public health and journal ethics) the researchers analyzed a number of internal Monsanto documents, most of them internal Monsanto communications.

Our first finding showed that when the scientific literature did not yield the results Monsanto desired, the company talked internally about writing its own journal articles and paying outside scientists to list their names on the documents when they were sent for publication.

The procedure is called “ghostwriting” to signify that the name of the person actually writing the study does not appear in the published article. What is evident from the internal documents is that “ghostwriting,” largely disavowed by respected journals as a form of plagiarism, appears as a normal business practice for Monsanto.

Papers showing ghostwriting practices, and/or referred to as having been ghostwritten in internal Monsanto documents, were published in peer-reviewed journals and concluded that there were no health concerns associated with Monsanto’s herbicide.

We found evidence that while the papers were presented as independent – indeed, in at least one case, a series of papers were titled as “independent” – Monsanto employees were involved in writing, drafting and determining conclusions.

Seeds of Destruction: The Hidden Agenda of Genetic Manipulation
Price: $51.57

A second finding shared in our article is that the company used all of its influence to pressure a journal editor to retract a paper, against the wishes of its authors, that drew results Monsanto found disagreeable. The internal documents describe Monsanto employee efforts to engage with the journal, making it clear that they do not want their role to be known.

Initially, one journal editor followed good publishing practices by supporting a scientific debate over the paper’s methods and results in the pages of the journal. After the journal appointed a former employee of Monsanto on its editorial board, the paper was retracted.
The editor-in-chief wrote in the retraction statement that he found “no evidence of fraud of intentional misrepresentation of the data,” …the results were not incorrect,” and there was no misconduct. He retracted the paper because he found the results to be “inconclusive.” 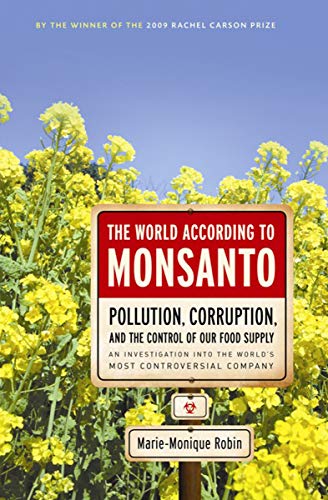 The World According to Monsanto: Pollution, Corruption, and the Control of Our Food Supply
Price: $12.99

“We also learned,” writes Krimsky, “that journals who learned from the disclosure documents that they published ghosted papers took no action against the authors, allowing the plagiarized papers to remain in the archival literature, even despite formal requests for clarifications or retractions in at least one case.”

The EPA also has been exposed yet again for acting as a stooge of Monsanto. The documents to which Krimsky is referring also show that Monsanto launched a concerted effort to exert influence over the EPA in order to persuade the Agency for Toxic Substances and Disease Registry, which is itself an arm of the Department of Health and Human Services, not to carry out its own assessment of glyphosate.

Leemon McHenry’s article, published in the International Journal of Risk And Safety In Medicine, entitled “The Monsanto Papers: Poisoning The Scientific Well,” expands the discussion of Monsanto’s ghostwriting techniques. For example, the article discusses a Monsanto written paper drafted for publication in Forbes Magazine with Henry Miller as the author. The paper was titled “March Madness From the United Nations” and was designed to disputE findings from the IARC that, in 2015, found that glyphosate is a possible human carcinogen.

Forbes, after finding out that the article had been ghostwritten, at least decided to remove the paper.

Another of McHenry’s findings from the discovery documents shows how Monsanto has blurred the sector boundaries of a private corporation and a public university. Monsanto supported a website at the University of Illinois at Urban-Champagne to enable two so-called “independent” faculty to do its bidding in criticizing the IARC’s cancer review.

The documents show that Monsanto wished to be a silent partner in this venture so as not to discredit the reviews.

McHenry shows us the efforts taken by Monsanto to exercise control over the “scientific” message about its chemical herbicide. He sums up the corporate mindset: “On one hand, [Monsanto] represents itself publicly as a vigorous champion of science against myths, fanaticism, emotion, politics and any failure to consider the total weight of evidence and, on the other, it privately seeks to protect itself against possible refutation by secretly controlling the scientific process…”

To protect the scientific enterprise, one of the core pillars of a modern democratic society, against the forces that would turn it into the handmaiden of industry or politics our society must support firewalls between academic science and the corporate sectors and educate young scientists and journal editors on the moral principles behind their respective professional roles.

Of course, while Monsanto is clearly at fault for attempting to pressure academic institutions and regulatory agencies, it should be noted that these institutions bear just as much responsibility. After all their constant harping about the integrity of science and their “authority” over all matters related to science and, as a result, public policy, they have clearly abrogated their own integrity and responsibility for financial gain or in order to please Monsanto.

This article (Monsanto Ghostwriting Journal Papers, Internal Documents Reveal) was created by and appeared first at Natural Blaze. It can be reshared with attribution but MUST include link to homepage, bio, intact links and this message. Image:Pixabay