“Disease awareness campaigns…are an effective way for companies to sell a disease to sell a drug.“

Why did Americans pay more than $1.5 billion a year in 2016 alone for a drug that potentially does so little, and to treat a condition that many would not even consider to be a disease?

Why are Americans – both as patients and taxpayers – paying billions of dollars for a drug whose efficacy is so questionable that it’s not approved in the European Union, Australia or New Zealand?

Restasis is a blockbuster drug sold by Allergan to treat chronic dry eye. It has done $8.8 billion in U.S. sales between 2009 and 2015, including over $2.9 billion in public monies through Medicare Part D, according to a Dartmouth Institute.


Restasis and Allergan have been in the news lately due to the company’s novel legal strategy of transferring their patents on the drug to the Saint Regis Mohawk Tribe in order to stave off competition posed by generic drugs. Patents for Restasis were also recently expired so one wonders whether the door is now open for ineffective generics. Let’s explain.

In a recently published article in JAMA IM, “A Clear-Eyed View of Restasis and Chronic Dry Eye Disease,” Lisa Schwartz and Steven Woloshin, physician-researchers at The Dartmouth Institute for Health Policy and Clinical Practice, argue that a more fundamental question we should be asking is: Does Restasis even work?

The FDA approved Restasis to increase tear production in 2003, after a 1999 application failed when reviewers and a unanimous FDA advisory committee concluded it did not meet efficacy criteria. Even though Restasis did not improve symptoms scores (compared to a placebo) when tested directly in the pivotal trials, the FDA accepted indirect evidence from the validation study in which, at six months, 15% vs. 5% of patients had a response with Restasis vs. placebo in a pooled analysis.

Meanwhile, regulatory agencies in other countries found the evidence of Restasis’s efficacy unconvincing. Australia’s regulatory agency found that the trials–the same ones submitted to the FDA–showed no convincing or sustained benefit to patients who had been treated with the drug. Although Canada approved Restasis for a narrower group of patients in 2010, its health technology assessment unit was unconvinced of the drug’s benefit and recommended Canada not pay for it. Schwartz and Woloshin’s research found that no Canadian provincial or federal drug plan currently does.

So why did Americans pay more than $1.5 billion a year in 2016 alone for a drug that potentially does so little, and to treat a condition that many would not even consider to be a disease?

Schwartz and Woloshin point to the extensive marketing campaign to sell chronic dry eye (CDE) as a disease–and Restasis as the only viable treatment option. From 2016-2017, Allergan spent $645 million advertising Restasis, including its mydryeyes.com website. The website, Schwartz and Woloshin say, recasts the merely unpleasant experience of itching or watery eyes (often caused by allergies, weather, or other common irritants) as disease. Visitors to the site and to another Allergan website, Restasis.com, are also warned of potential health consequences of undiagnosed and/or untreated CDE disease.

Schwartz and Woloshin also note that both websites offer online help locating a doctor, though neither site discloses that participating doctors many have company ties! 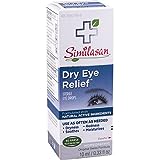 But people shouldn’t assume that you even need a drug to treat symptoms–or that the advertised drug actually relieves the symptoms in the quizzes.

Restasis might not have become such a blockbuster drug, Schwartz and Woloshin argue if consumers, doctors, and payers had easy access to independent drug information.

Medisin: The Causes & Solutions to Disease, Malnutrition, And the Medical Sins That Are Killing the World

Reviews may be heavily redacted and some are never released. Unlike its counterparts in Europe and Australia, the FDA currently does not release reviews for drugs not approved (even when marketing applications are withdrawn prior to final regulatory action). Schwartz and Woloshin argue that they should.

When you think of all the good that could have been done with the billions spent on Restasis in the U.S., it reminds us how high the stakes are for better independent information about how well drugs work.

Don’t forget to alert your friends!This article (Why Did Americans Pay Billions for a Drug Deemed Worthless in Other Countries) appeared first at Natural Blaze. It can be reshared with attribution but MUST include link to homepage, bio, intact links and this message.