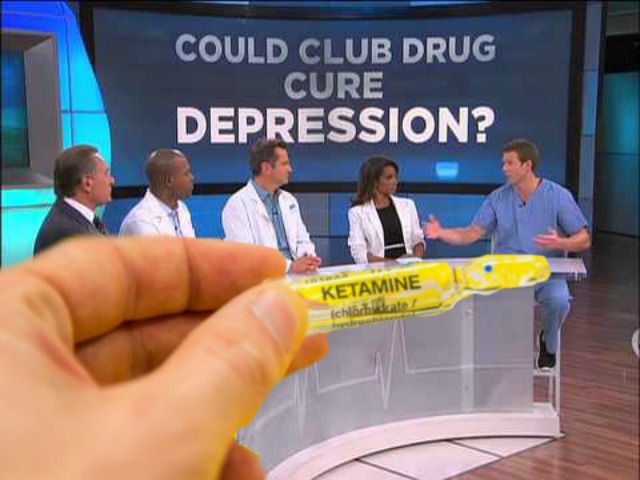 Ketamine is better known as a tranquilizer (more often associated with horses). In recent years, it has emerged as a popular club drug. It has even made headlines as a depression treatment in science circles, demonstrating once again, the utter stupidity of the war on drugs.

Now, researchers have found that suicidal thoughts are rapidly reduced with ketamine use – more so than typical sedatives – find out more…

They also found that ketamine’s anti-suicidal effects occurred within hours after its administration.

Those in the ketamine group also had greater improvement in overall mood, depression, and fatigue compared with the midazolam group. Ketamine’s effect on depression accounted for approximately one-third of its effect on suicidal thoughts, suggesting the treatment has a specific anti-suicidal effect.

Side effects, mainly dissociation (feeling spacey) and an increase in blood pressure during the infusion, were mild to moderate and typically resolved within minutes to hours after receiving ketamine.

“This study shows that ketamine offers promise as a rapidly acting treatment for reducing suicidal thoughts in patients with depression,” said Michael Grunebaum, MD, a research psychiatrist at CUMC, who led the study.

“Additional research to evaluate ketamine’s antidepressant and anti-suicidal effects may pave the way for the development of new antidepressant medications that are faster acting and have the potential to help individuals who do not respond to currently available treatments.”

“There is a critical window in which depressed patients who are suicidal need rapid relief to prevent self-harm,” said Dr. Grunebaum.

Fortunately, previous studies on ketamine’s effect on suicidal thoughts coupled with this one can pave the way for a different perspective on drugs and drug use. The last few years have blown the lid on the medicinal uses of psilocybin, MDMA, LSD and marijuana – especially for PTSD. This is not to say everyone should go out and K-hole, but it does expose the lies of the DEA’s schedule system that paints these substances as useless, dangerous and crime-inducing.

New research seriously undermines the archaic war on drugs – as it should, since peaceful people who may or may not be in need of remedy, will not be helped locked in a cage against their will in the privatized prison system.