Last week, the FDA dropped the other shoe to ban kratom that we all knew was coming.Faceless bureaucrats at the Food and Drug Administration told the new FDA Commissioner, Scott Gottlieb, to issue a ‘Public Health Advisory’ on kratom, justified by outright LIES that kratom carries similar risks as opiates, including addiction and death, and other mischaracterized scientific claims.

Major media outlets such as CNN, CBS News, NBC, NPR, Fox News and others picked up on the advisory, further spreading the FDA’s lies–all part of their campaign to threaten our hard work to keep kratom legal and available to you.The most troubling coverage of the FDA Advisory came in the form of a CNBC interview with FDA Commissioner Dr. Scott Gottlieb,who lied on air and described kratom is an ‘opioid analogue, setting the stage to include kratom as a banned substance in the SITSA (Stop the Importation and Trafficking of Synthetic Analogues) Bill.


SITSA, if passed, would give Attorney General Jeff Sessions unchecked authority to ban any substance without any medical or scientific review; for a “temporary” period of FIVE YEARS, and exempt from a judicial or legislative challenge during that span.

AKA was criticized for ‘causing a panic’ by some in the kratom industry for coming out strong against SITSA, arguing the bill wouldn’t impact kratom given that it is not an analogue of an opioid.

…but we kept up the fight, confident that the FDA & DEA would make a move to classify kratom as an analogue so they could easily ban it under SITSA.

…And after issuing the public advisory last week, FDA Commissioner Scott Goetlieb went on CNBC and did just that. 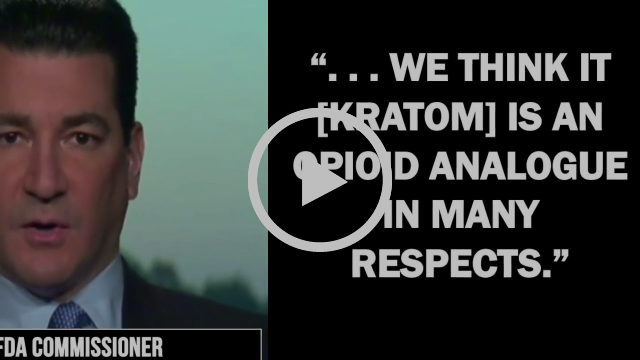 FDA Commissioner Dr. Scott Gottlieb lies on CNBC that  kratom is an analogue of an opioid, setting the stage for DEA scheduling and subject to a complete ban through SITSA.

Warriors, kratom opponents think they have victory in sight, but we can’t let them win!This is our plan to fight back. Will you join us?

We simply cannot wait, and neither can you. We must act immediately and deploy our team across the United States to tell the truth about kratom, tell your stories to the media, put pressure on these bureaucrats and reverse this attack and these lies against kratom.We have shown that together, we can win! We won our fight with the DEA when they wanted to criminalize kratom consumers last summer, and we will win against the FDA’s efforts to restrict the use of kratom if you support us in this biggest fight yet.

A war of this magnitude against lawmakers, bureaucrats at government agencies and outside influencers, isn’t going to be cheap, but we’ll do whatever it takes to win.

Every dollar you can give gets us one step closer to winning this war.

We won’t stop fighting until we guarantee that you’ll have unrestricted and legal access to kratom for as long as you need it without worry that it will ever be taken away.

We warned from the beginning that the FDA and the DEA are ready to ban kratom— and classifying kratom as an opioidanalogue would give them justification for doing so!

This video proves that the FDA will do whatever they can to lend support to an outright DEA scheduling, even if it means misrepresenting the science and lying to the public!

Without a doubt, the FDA’s Public Advisory was issued NOT out of the concern for the well-being of citizens, but for the sole purpose of influencing public sentiment, regulatory actions  andultimately, push forward legislation to ban the use and sale of kratom in states across the country.

Our lobbyists in Washington D.C. have told us that kratom opponents will use this advisory and these lies as fuel for their efforts to accomplish a complete ban and restrict your access to kratom completely.

You have my personal commitment that I will continue to work as hard as I can and for as long as it takes to win.

Your donation helps us send a clear message to Commissioner Gottlieb of the FDA, the media and the opponents of kratom, and those faceless bureaucrats– that we are strong advocates for kratom, and we won’t stop until our right to live healthy lives is safe and guaranteed.

Thank you for being a part of the fight and for your continued support.

This post was published with permission from the American Kratom Association