LANSING, Mich. October 27, 2017 – Montmorency tart cherry juice was found to help extend sleep time by 84 minutes among eight study participants, ages 50 and older who suffer from insomnia, according to a new pilot study published in American Journal of Therapeutics1.

“Insomnia is quite common among older adults and it can lead to a range of health issues if left untreated,” said lead researcher Jack Losso, professor in the School of Nutrition and Food Sciences at Louisiana State University Agricultural Center in Baton Rouge who has conducted previous studies on tart cherry juice and sleep. “However, many people are hesitant to resort to medications to help them sleep. That’s why natural sleep remedies are increasingly of interest and in demand.”

Eight healthy male and female subjects 50 years or older with chronic insomnia and a usual bedtime between 9 p.m. and midnight participated in this randomized, double-blind, placebo-controlled clinical trial. Insomnia was defined as trouble sleeping on average three nights per week, with an Insomnia Severity Index score greater or equal to 10 and meeting the International Classification of Sleep Disorders-2 criteria for insomnia.

In advance of screening, potential subjects fasted for 10 hours, excluding water, before a blood test was administered and questionnaires were completed, including the Insomnia Severity Index.

Procyanidins and anthocyanins are the major compounds, or polyphenols, in Montmorency tart cherries. The placebo drink, made of distilled water, fructose, dextrose and lemon powder, did not contain these polyphenols found in the tart cherry juice.

After two weeks of consuming Montmorency tart cherry juice or the placebo drink, subjects had an overnight polysomnographic sleep study and blood was drawn to measure the kynurenine-to-tryptophan ratio, which identifies tryptophan degradation and prostaglandin E2 (PGE2) to evaluate inflammation. On waking after the sleep study, five validated questionnaires previously conducted with participants were repeated and subjects were questioned about any adverse events. After a two-week washout period, the subjects were crossed over to the tart cherry juice or placebo group, and the two-week testing period was repeated.

Given there are no current polysomnographic studies of Montmorency tart cherry juice on which to base a power analysis, the clinical trial was designed as a pilot study to determine power for a larger, adequately powered study that would give statistically significant differences. Dr. Losso collaborated with Dr. Frank Greenway, professor at the Pennington Biomedical Research Center, a research campus of the Louisiana State University, to perform the clinical trial with polysomnography.

When compared to a placebo, Montmorency tart cherry juice was found to significantly extend sleep time of the senior insomniacs by 84 minutes. Sleep efficiency increased on the Pittsburgh Sleep Quality Index, but the other questionnaires showed no significant differences. Despite the small size of the pilot study, researchers demonstrated reduced plasma levels of kynurenine with increased tryptophan levels. In this study, in vitro results showed that the tart cherry juice procyanidin B-2 inhibited serum indoleanmine 2,3-dioxygenase (IDO), which was identified as part of the mechanism for tart cherry juice improving sleep efficiency, and in vivo results showed the inhibition of PGE2, which is a biomarker of inflammation. While not conclusive, such outcomes should be used as background for forming hypotheses for the conduct of human clinical trials. 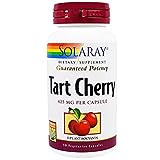 The study’s use of a polysomnography, considered the “gold-standard” method for evaluating sleep pathology, provided a more accurate assessment of sleep than methods administered in similar studies, allowing for the selection of subjects with insomnia versus other sleep disorders, such as sleep apnea. Because three of the original eleven identified subjects in this study meeting the Pigeon2 screening criteria had sleep apnea rather than insomnia, being able to identify and eliminate subjects suffering from sleep apnea was important for achieving accurate results.

This data adds to the growing body of previous research showing similar results pointing to the potential effects of Montmorency tart cherry juice on sleep quantity and quality2-4. While additional research is needed, the researchers at Louisiana State University are encouraged by the significant increase in sleep time among the senior insomniacs who participated in this study.

Montmorency tart cherries are the most common variety of tart cherries grown in the U.S., and are available year-round in dried, frozen, canned, juice and concentrated forms.