Try These Probiotics To Boost Your Mood and Relieve Stress Looking For A Mood Boost And Stress Reliever? Opt For These Probiotics

Probiotics are a particular series of supplements that have been gaining quite a lot of interest and popularity amongst the general population in the recent years. These supplements provide living microorganisms that offer a lot of benefits for the human body.

Probiotics are now used to treat diarrhea and other gastrointestinal issues, assist with regulating the body’s immune response, treat inflammatory conditions and, most recently, evidence has also become available that certain probiotics may also be beneficial for the mental wellbeing of the user.

Top Probiotics To Use For Improving Your Mood

Stress affects how we think, how we feel and even how we behave. While stress is a mental health issue, its effects do not only affect our psychological wellbeing, but also affects our physical health.


Mayo Clinic reports that stress can cause constant headaches, tense muscles, chest pain, fatigue, an upset stomach and even problems with your sleep habits. Experiencing a change in our libido and your interest in sexual activity is also not uncommon if you suffer from a lot of stress. Depression is also a relatively common mental health illness, affecting around 6.7% of American adults, that affects a person’s way of thinking and, of course, their mood.

Lactobacillus acidophilus is one of the most popular probiotics, often added to dairy products to enhance their efficiency. These microorganisms have numerous benefits to offer the human body, with the effects of the microorganisms in the gastrointestinal tract being the most commonly recognized.

Probiotics America reports that recent scientific studies have also proven that Lactobacillus acidophilus has a positive impact on mental health as well, thanks to the fact that it acts upon the gut-brain axis present in the body. They report this particular species of microorganisms have been shown to reduce anxiety and present itself as a natural treatment for depression.

For example, a study whose findings were published in the Nutrition aimed to determine the effects of probiotic intake on depression symptoms. Participants were assigned to different groups where they either took supplements including Lactobacillus acidophilus or a placebo. Findings showed that patients who took this probiotic strain had significantly decreased symptoms compared with the placebo group. 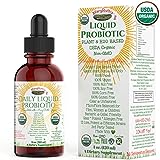 The Lactobacillus rhamnosus bacterium species was recently classified as a species of its own after it was thought to be part of another species for many years. This species of bacterium in the gastrointestinal tract is often utilized in the treatment of diarrhea and obesity, as well as to assist with urinary tract infections, peanut allergies, and even dermatitis.

A study by the University College Cork in Ireland also provided evidence that ingestion of the Lactobacillus rhamnosus bacterium species has an effect on the neurotransmitter receptors in the brain, which, in turn, has numerous benefits for the psychological wellbeing of the user. Symptoms of depression and anxiety seem to be amongst the top list of affected areas when this particular bacterium species is utilized. Improvements in these diseases may lead to significant improvements in mood.

Interestingly, a study from the Behavioral Pharmacology discovered that Lactobacillus rhamnosus is equally effective as fluoxetine (a drug used to treat depression and OCD) in blocking the induction of OCD-like behavior without side effects. Also, a group of scientists from Canada carried out an interesting research which included this probiotic strain. The primary goal of the study was to evaluate the potential of single bacteria strain to modulate the impact of stress.

Results, featured in the BMC Medicine, showed treatment with Lactobacillus rhamnosus successfully attenuated stress-related activation of dendritic cells (important for the immune system). In fact, this particular probiotic modulated stress without causing an imbalance of bacteria in the gut. Scientists concluded their study explaining their findings confirm the importance of probiotics in the treatment of stress-related disorders.

Bifidobacterium longum is one of the first microorganisms to inhabit the gastrointestinal tract of the human body during infancy. Taken as a probiotic supplement, this particular bacterium species can help to protect against infection and pathogenic bacterium species. It can also alleviate inflammation; assist with the treatment of allergies and lower levels of bad cholesterol.

Bifidobacterium longum is also beneficial for individuals suffering from metabolic syndrome and other issues affecting the wellbeing of their gastrointestinal tracts. Furthermore, several mental health benefits have been noticed amongst individuals that have utilized Bifidobacterium longum for mental health. These bacterium species may assist with reducing the symptoms of anxiety, enhancing mental performance, and even to assist with enhancing mood.

The Translational Psychiatry featured an important research which showed that Bifidobacterium longum is strongly associated with reduced stress levels and it plays a major role in improving memory. Another study about this probiotic, published in the British Journal of Nutrition, discovered that probiotic formulation which also included Bifidobacterium longum reduced anxiety-like behaviors and alleviated psychological distress in participants as measured by parameters such as problem-solving, hostility, depression.

Furthermore, researchers at the Farncombe Family Digestive Health Research Institute found that twice as many adults with IBS (irritable bowel syndrome) reported improvements in co-existing depression when they took Bifidobacterium longum than their counterparts who took a placebo. 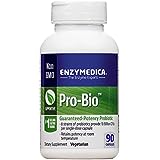 This is one of the most important bacterium species in the human body. Lactobacillus Plantarum forms a layer on the inside of the gastrointestinal tract; thus acting as a defense mechanism for the body. This protects the body from potentially harmful bacteria and also prevents the growth of pathogenic bacterium species.

Dr. Jockers report that Lactobacillus plantarum is also beneficial for brain development, reduces inflammation in the brain and can also be useful for certain mental health problems, such as depression and bipolar disorder.

A paper published in the FEMS Microbiology Letterss hows that although the primary mechanisms associated with beneficial effects of Lactobacillus plantarum are known, there is no doubt this probiotic strain improves overall human health and wellbeing.

Additionally, a group of researchers at the Hokkaido Information University in Japan carried out a study to inspect the impact of yogurt containing Lactobacillus plantarum on stress markers. Findings, published in the Journal of Traditional and Complementary Medicine, revealed ingestion of this particular strain improves the immune activity of the user and decreases stress. It’s needless to mention that stress plays a major role in mood disorders.

Probably the best piece of evidence about benefits of Lactobacillus Plantarum on mood comes from Taiwanese scientists whose study appeared in the journal Brain Research. They discovered this probiotic strain has the tremendous potential to change emotional behaviors or, more precisely, to reduce depression-like and anxiety-like behaviors as well as to modulate prefrontal cortical serotonergic and dopaminergic systems.

This is another group of good microorganisms that reside in the human gastrointestinal tract. They assist with the breakdown of fiber and acts upon the immune system. Bifidobacterium Bifidum also helps to protect the body against potentially harmful pathogens and has a connection with the brain as well, similar to the other species we have discussed here.

A review paper, published on BioMed Central, evaluated the results of several clinical studies. One particular 6-month study on Bifidobacterium bifidum provided evidence of a 40.7% average improvement in the symptoms they experienced due to depression, anxiety, and other mental health issues. The majority of the participants also provided a positive rating when asked how they felt after the use of these microorganisms.

What makes Bifidobacterium bifidum so beneficial is the fact it reduces both stress and its physiological consequences. Chronic stress leads to far more severe problems and it is a well-known fact depression and anxiety are indicated by some physical symptoms as well. How does this probiotic help? A study whose findings were published in the British Journal of Nutrition showed that percentage of participants who reported cold/flu during the 6-week intervention was significantly lower than in placebo group for the average level of stress. Scientists concluded that daily intake of these bacteria provides benefit related to cold/flu outcomes during acute stress.

This is particularly important if you bear in mind that stress weakens your immune system and makes you more susceptible to viruses including cold and flu. Additionally, a study from the Beneficial Microbes found that Bacterium bifidum strain decreases stress-associated diarrhea and self-reported stress levels in participants.

Stress, depression and anxiety disorders often cause mood changes and reduce a person’s motivation. Fatigue and many other symptoms may also accompany these problems and can be quite unpleasant to a person that suffers from the conditions. Recent studies have suggestions that psychobiotics, certain types of probiotics that affect the gut-brain connection, can assist with treating depression and improving mood amongst affected individuals. We’ve outlined some of the most potent ingredients to look for when buying probiotics to help improve your mood.

Adonia Dennis (@adoniadennis), by profession a Health, Beauty and Skin Care adviser. She provides solution related to health and beauty problems. She is an independent researcher who researches for all skin related issues. She is a featured blogger at huffingtonpost.com and sheknows.com and share her views on health, fitness, and diet. Visit Adonia on Facebook, Google+, and LinkedIn.