Alchemilla vulgaris or Lady’s mantle benefits are known for centuries. In Arab countries, this antioxidant-rich tea has traditionally been used to reduce inflammation and gastrointestinal pain and to promote weight loss. European women have been using lady’s mantle tea for treating infertility, relieving menstrual cramps and treating sore throats.

The scientific community also shows interest for the Lady’s mantle benefits and some of its traditional medicinal uses have in fact been substantiated by scientific studies.


Because of the variety of tannins, it has a bitter taste, but also a powerful antibacterial and anti-inflammatory effect. The Lady’s Mantle is most popular as a tool against women’s diseases because it is one of the most effective plants for this type of problems.

Here’s a lowdown of the Lady’s mantle benefits:

For Pregnancy and Childbirth

Lady’s mantle is the best herbal treatment option for infertility. Many of the herb’s constituents, especially the bitter substances and the tannins, have a regulating and balancing effect on the female reproductive system. Because it works as a great hormone regulator it ensures regular menstrual cycle which is very important when trying to conceive. It is also very effective in the treatment of polycystic ovaries.

Lady’s mantle tea can help for strengthening the uterus, facilitating easier birth and protect from miscarriage. Additionally, the herb is also recommended for injuries caused by the labor, it is believed to enhance the formation of milk production after birth and for flabby belly.

Lady’s mantle reduces pain associated with menstruation. The herb may be beneficial for prolonged or heavy uterine or menstrual bleeding because it works as an astringent.

It can be used topically as an herbal douche, as a soothing treatment for different female gynecological disorders, such as vaginal discharge and inflammation.

For prevention, take Lady’s mantle orally 10 to 15 days before menstruation.

Lady’s mantle due to its high content of tannins is considered a good remedy for cuts, wounds, and scrapes. The herb may be helpful for speeding up the healing process and numbing the pain.

To treat minor skin injuries (bruises, scrapes, cuts), a compress can be soaked with Lady’s mantle tea or extract and applied to the area that needs to be treated.

For slow healing wounds, alternatively, wash the wound with a strong Lady’s mantle tea or apply crushed leaves directly on the wound.

Culpeper says Lady’s Mantle is very effective for inflamed wounds and to stop fluxes of all sorts, vomitings, bleeding, bruises and ruptures.  (1)

Lady’s Mantle has also been traditionally used for diarrhea and for colitis with bleeding. Actually, it is a herb that has been used for unwanted or excessive discharges in general and to treat excessive bleeding from any cause. 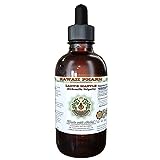 Among the Lady’s mantle benefits are its antiviral properties. The latest scientific research reveals that Lady’s mantle prevents the growth of many types of bacteria, including staph – bacteria that is resistant to many antibiotics.

One study published in International Journal of Pharmaceutical Science Invention shows that herbs and flowers of this medical plant investigation were applied against 17 bacteria and 1 fungi by using disk diffusion method. These microbial strains include Bacillus, Enterobacter, Enterococcus, Escherichia, Klebsiella, Listeria, Pseudomonas, Salmonella, Staphylococcus and Candida geniuses. The results were presented that A. vulgaris ethanol extract has antimicrobial activity against all tested microbial strains. (2)

As it helps in healing of wounds and tones and regenerates the uterus, it is the extraordinary remedy against a disease which is caused by the human papilloma virus (HPV).

One study about vasorelaxant and blood pressure lowering effects of alchemilla vulgaris demonstrated that the methanol extract of Alchemilla vulgaris has more favorable and prominent vascular effects in experimental and normal hypertensive conditions than the aqueous extract, reinforcing its traditional use in cardiovascular disorders, especially for hypertension. (3)

Extracts of olive leaf and Lady’s mantle had been shown to increase fat burning or basal metabolic rate, while cumin and mint have been used for centuries to stimulate digestive enzymes and to suppress appetite. A team of researchers investigated the effects of a herbal mixture containing extracts of Alchemilla vulgaris – Lady’s mantle, Olea europaea – olive tree leaves and Mentha longifolia L. – mint, as well as seeds of Cuminum cyminum – cumin in 66 obese and overweight volunteers. During the 3-month study period, the volunteers experienced significant and progressive weight loss, suggesting that one or more of the plant extracts included in the formulation, in fact, may have weight loss promoting properties. (5) 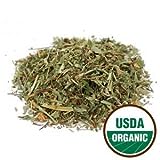 If you want to keep your antioxidant levels up Lady’s mantle tea is a perfect solution. A Bulgarian study published in the journal Phytotherapy Research found that among the tested herbal infusions, an infusion made of dried Lady’s mantle leaves had the strongest antioxidant activity, as determined by the ABTS method. This study evaluated the antioxidant activity of infusions of 23 medicinal plants, including leaves of wild celery, barberries, pot marigold flowers, bilberries, tarragon, basil, and spearmint. (6)

The herb also works well when used as an ingredient in skin creams for acne, eczema, rashes, and insect bites.

Creams that contain Lady’s mantle may also be beneficial in softening rough and dry skin.

As an herbal gargle, it is an excellent remedy for a sore throat, bleeding gums, and mouth ulcers (canker Sores).

Lady’s mantle has an astringent effect which may be useful in treating bowel disorders such as diarrhea and bloody stools.

Due to its high content of antioxidants, it helps the scalp to produce healthy cells and leads to the natural growth of hair follicles. Lady’s mantle is very effective as a hair tonic and helps hair retain its natural color for a longer period.

Other Lady’s Mantle Benefits and Uses

Lady’s mantle can also give light yellow color so it can be used as a dye plant.

You can eat the leaves on their own or as an addition to salads. The herb contains high levels of tannin so leaves have a rather bitter taste.

After a dental procedure, rinse your mouth with an extract of Lady’s mantle. It will facilitate healing and ease the blood flow.

For Bath, in three liters of boiling water add 200 grams of dried Lady’s mantle and pour it into the tub filled with water. Enjoy in this bath for 10 to 20 minutes and then go to sleep.

Lady’s mantle easily grows in well-drained soil in either part shade or full sun. Rather than growing it from seed, root divisions and cuttings are the best ways to obtain a plant.

The MOST IMPORTANT is that this caffeine-free beverage is a very safe herb to take in frequent or high doses when needed.

As an herbal tea: Add one or two teaspoons of the dried herb in a cup of boiling water. Filter tea after 10-15 minutes.

For commercially made tinctures always follow the manufacturer’s instructions.

Women who run a risk of miscarriage or had an abortion should drink 4-6 cups of tea daily. In cases of white discharge, add 50 g dried lady’s mantle leaves in 1l of boiling water. Drink this tea during the whole day.

External Decoction: Put 100 g in 1 liter of boiling water. Let it steep for 10 minutes. Use it for vaginal washes, to clean wounds, and gargles.