Three Taiwan university students came up with a brilliant way to raise awareness about their polluted water reserves. By crafting real water samples into frozen popsicles that never melt because they fashioned them in resin. The dramatic array of colors and solids suspended in everyone’s favorite summer treat makes for an unsettling yet strangely beautiful exhibit. It’s called the Polluted Popsicles Project and is now on display at an art exhibition in Taipei.

The students gathered actual water samples in 100 different locations across the country. Lest people think the message is too heavy-handed, the students used layers of symbolism to get the message across. For instance, the beautiful wrapping is symbolic of how devastating problems can be “wrapped up” in pretty imagery. The translucent and friendly colors create a bold contrast to the dangers of actually consuming the materials.

The numbered wrappers show where each sample was taken and describes the contents therein. Some of the “ingredients” include plastics, bottle caps, chopstick wrappers, cigarettes, odd colored substances, snails/eggs and more. Other waste-full flavors include metal, arsenic, mercury, and other toxins.

The students told My Modern Met:

…Polluted Water Popsicles forces us to face the insidious issues beneath what we perceive as harmless. Much as one is tempted to take a lick before looking closely at what the popsicle really contains, we often overlook the importance of water purity. 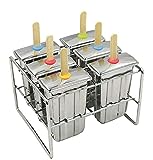 I’d be remiss if I didn’t offer that the U.S. could use some similar “artivism” for its own water crises and the use of sewage and wastewater – or even “frackwater” – to grow crops.

In fact, the reason the U.S. uses human sewage to grow non-organic crops is because it did the inverse of Taiwan’s awareness campaign. That is, clever PR campaign was crafted that renamed sewage sludge to “biosolids” so as to deliberately keep Americans unaware of the practice.

Not only is human waste used to grow U.S. crops, but also enough waste water to contain significant amounts of bipolar medications, one of the most over-prescribed class of drugs. These are taken up into the produce.

I applaud Taiwan – now, where is our art activism?