It takes just a few minutes to absorb the mercury from an entire lake.

Scientists from the University of Minnesota College of Food, Agricultural and Natural Sciences just invented a device that many are calling a “super sponge” that can absorb mercury from polluted water in a matter of seconds. With the many water crises occurring around the world, it’s more important than ever to develop tools like this sponge to help combat a growing problem.

Though the problem seemingly plaguing U.S. citizens right now is lead being found in tap water, mercury in water is a viable problem as well. Just in the state this sponge was created in, Minnesota, two-thirds of the bodies of water on the Impaired Waters List were found to be primarily impaired by mercury contamination. This is significant and may now be a problem of the past if the sponge proves effective for large bodies of water.

Several sources have cited this as an example:

“Think of it this way: if Como Lake in St. Paul was contaminated with mercury at the EPA limit, the sponge needed to remove all of the mercury would be the size of a basketball.”

It’s absolutely incredible that such a small tool could accomplish this in so little time. According to the study, it would take just a few seconds for the sponge to soak up the mercury in the tap water in someone’s home, or as little as 5 minutes to remove mercury from industrial wastewater.

Read: Gluten-Free Diet Can Expose You To More Heavy Metals Like Mercury

With intense mercury absorption properties, the toxic chemical is attracted to the sponge, which then converts it into a non-toxic complex so that the sponge can be easily disposed of in a landfill. The sponge is also antibacterial and antimicrobial. 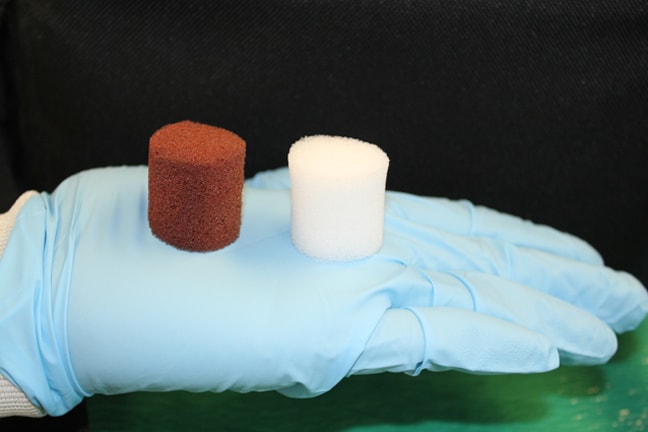 Mercury in drinking water isn’t the only thing to be concerned about; mercury is largely found in fish that are taken from lakes contaminated with mercury, which, if eaten, can harm the organs in people of all ages. The people that are most at-risk are pregnant women, because their newborns can be affected by the mercury as well. In Minnesota’s North Shore, 10% of newborns recently tested were found to have mercury concentrations in their system that were above the EPA limit. This means that, despite warnings and prevention techniques, people still find themselves constantly exposed to the substance.

This is just the first advancement in what’s sure to be a long line of devices meant to clean up water for the entire world population, and it’s exciting to think about the clean water that could be accessible in the near future.