A new study published in the journal Applied and Environmental Microbiology has demonstrated a disturbing link between pesticide exposure and the destruction of healthy bacteria of the mouth.

The study involved an examination of “oral buccal microbiota” in an agriculutural community involving 65 farm workers and 52 non-farm workers. The purpose of the study was to investigate whether or not pesticide exposure caused any changes in the mouth bacteria.

Of course, not all bacteria is bad including streptococcus which is actually one of the most common bacteria found in the mouth.

What was found was that not only did farm workers have a higher blood level of pesticides, they also had greater changes in mouth bacteria in individuals who did not work on farms.

As the authors of the study wrote,

We found a seasonally persistent association between the detected blood concentration of the insecticide Azinphos-methyl and the taxonomic composition of the buccal swab oral microbiome. Blood and buccal samples were collected concurrently from individual subjects in two seasons, spring/summer 2005 and winter 2006. Mass spectrometry quantified blood concentrations of the organophosphate insecticide Azinphos-methyl. Buccal oral microbiome samples were 16S rRNA gene DNA sequenced, assigned to the bacterial taxonomy and analyzed after ‘centered-log-ratio’ transformation to handle the compositional nature of the proportional abundances of bacteria per sample. Non-parametric analysis of the transformed microbiome data for individuals with and without Azinphos-methyl blood detection showed significant perturbations in seven common bacterial genera (>0.5% of sample mean read depth), including significant reductions in the common oral bacteria, Streptococcus. Diversity in ‘centered-log-ratio’ composition between individuals’ microbiomes was also investigated using principal components analysis (PCA) to reveal two primary PCA clusters of microbiome types. The spring/summer ‘exposed’ microbiome cluster with significantly less bacterial diversity was enriched for farmworkers and contained 27 of the 30 individuals who also had Azinphos-methyl agricultural pesticide exposure detected in the blood.

In addition, they wrote,

In this study we show in human subjects that organophosphate pesticide exposure is associated with large-scale significant alterations of the oral buccal microbiota composition with extinctions of whole genera suggested in some individuals. Persistence from the spring/summer to the winter of this association also suggests long lasting effects on the on March 6, 2017 by guest http://aem.asm.org/ Downloaded from 3 commensal microbiota have occurred.

The study did not, however, look into how the changes in the bacteria of the mouth affects overall health. 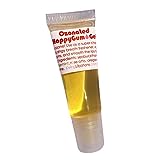 However, it is known that changing the number and type of bacteria of the mouth can lead to oral health issues.

Regardless, this new research shows the danger of pesticide exposure, not only for farmers but consumers purchasing food doused with those chemicals.

Image: by Natural Blaze via pixabay and London.Japanes.Knotweed UK clipart