“I signed up to serve my country and my people.”

The 2,000 veterans, which include Rep. Tulsi Gabbard (D-Hawaii), plan to act as an unarmed militia and peaceful human shields to protect the Indigenous activists from police brutality.

“I signed up to serve my country and my people and I did that overseas,” Indigenous U.S. Navy veteran Brandee Paisano told the CBC. “I didn’t think I’d have to do it here, on this land, so here I am. This is what I need to be doing.”

The “deployment” is officially planned for December 4-7, but veterans who have arrived early have already taken their stand in front of the militarized police blockade stopping traffic into and out of the camp: 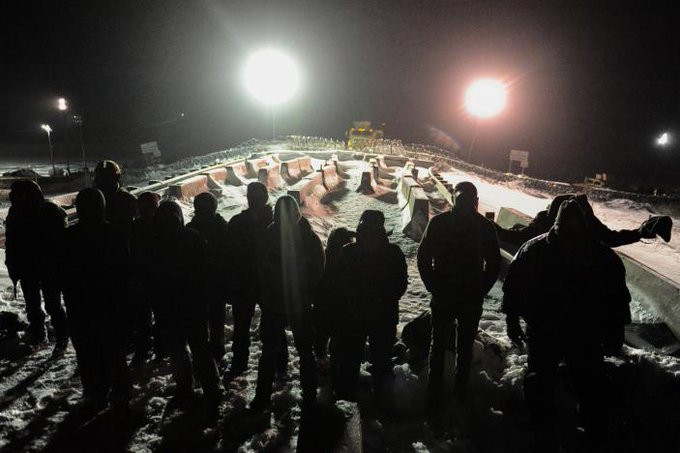 Our veterans once again on the front line….this time to defend Americans from their own government. #noDAPL#WaterProtectors

The “Veterans Stand for Standing Rock” action has garnered widespread support, with the National Nurses United (NNU) union sending $50,000 to fund their expenses and a popular fundraiser surpassing $800,000 by Friday afternoon.

“We salute the brave veterans who are standing up for the rights of the water protectors, and all of us who support this critical defense of the First Amendment right to assemble and protest without facing brutal and unwarranted attacks,” said NNU co-president Jean Ross.

Also on Friday, water protectors fulfilled a wishlist of supplies created by the Morton County Sheriff’s Department in Mandan, North Dakota, as an act of goodwill.

The generosity was striking, as officers from Morton County have subjected the Indigenous activists to extreme uses of force in recent days—including water cannons in subfreezing temperatures, mace, rubber bullets, and allegedly concussion grenades. One activist is still in danger of losing an arm after being struck with by what witnesses described as a concussion grenade thrown directly at her by police in riot gear.

“The Oceti Sakowin camp is a prayer camp, and a resilient, self-sufficient community,” the advocacy groups continued. “The camp is full of abundance—in spirit, in humanity, and in resources. Oceti Sakowin has enough to share. Generosity is an original teaching for the Lakota.”

The Standing Rock Sioux Tribe also pushed back earlier this week against Dakota Access Pipeline company CEO Kelcy Warren, who has claimed that the pipeline would have been rerouted if only the tribe had spoken up sooner, with the release of a recording that showed the tribe had officially opposed the pipeline since at least 2014.

“[T]he recording provides audio from a Sept. 30, 2014, meeting in which Standing Rock officials expressed their opposition to the pipeline and raised concerns about its potential impact to sacred sites and their water supply—nearly two years before they raised similar objections in a federal lawsuit,” the Bismarck Tribune reports.

Meanwhile, since the Monday evacuation order from North Dakota Gov. Jack Dalrymple, officials have been threatening those bringing supplies into the camp with exorbitant fines.

The Indigenous activists (and journalists covering their fight) are already grappling with exaggerated criminal charges—which are often later thrown out in court.

The fines and charges are a tactic to dissuade and silence them, the water protectors say.

Yet the Standing Rock Sioux Tribe and their allies remain firm in their commitment to their fight for clean water and traditional territory. The New York Times‘ Timothy Egan wrote Friday:

[M]any of the natives at Standing Rock are not bitter, and see this stand in spiritual terms.

As CNN‘s Sara Sidner reported: “The only thing that’s going to make protesters leave […] is if the pipeline is stopped.”