Gardasil devastation is NO coincidence Fifteen-year-old Caitlin Grace is my hero. Once a green belt in karate, walking over ten miles per day, she is now physically debilitated from a vaccine that was supposed to prevent her from getting cancer. This is her story.

Caitlin received the full series of three Gardasil shots between September 2012 and July 2013.  In hindsight, I should have trusted my mother’s intuition and not allowed Caitlin to receive the vaccine. When I asked her pediatrician of ten years if he would give it to his own daughter, he said that he definitely would. I trusted him and we gave her the full series. I live with the guilt to this day.

In February 2013, my healthy, active, academically gifted daughter received the 2ndof three recommended HPV-4 (Gardasil) injections. Within a week, she developed cold symptoms and a barking cough. I did not think it was related to the vaccine. How could a vaccine cause a cold? She went on to develop repeated lung spasms.

After her third injection, she experienced dizzy spells, loss of balance, weakness, anxiety, ear pain, abdominal pain, and nausea. I was never an “anti-vaxxer” (if I were, I wouldn’t have agreed to the HPV vaccine) so. I never even associated her new symptoms with Gardasil.

After being diagnosed with a simple sinus infection, Caitlin was prescribed a “z—pack” – which she’d had many times before with no problems. This time, within 15 minutes of taking her first dose, I was frantically working to keep her alive until the ambulance arrived. She was diagnosed with severe unexplained hypokalemia (life-threatening low potassium) and a cardiac condition called Prolonged QT interval. She was treated with IV potassium and magnesium then released.

She has not been the same since.

Can you imagine living every day not knowing if at any moment you will become paralyzed and in excruciating pain?

This is what Caitlin has lived with every day since December 12, 2014.

She will be talking, laughing, walking, when all of a sudden she loses control of her neck, upper body, and her legs give out. If she’s not in a safe place, she’ll fall or slump forward, making breathing difficult, if not impossible. She has been diagnosed with hypokalemic periodic paralysis but she has “outlying” symptoms that have not yet been explained by doctors. 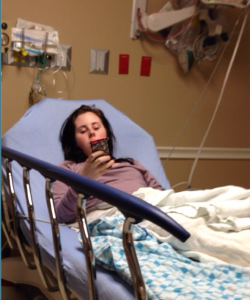 Gardasil: The ‘gift’ that keeps on giving?

It was only when another mom contacted me via social media, asking, “Has your daughter had the Gardasil shot, by any chance?” that I began to put the pieces together.  To be honest, I thought she was crazy at first. But I started reading the stories of other young people who have been injured by Gardasil. Their stories are so similar to Caitlin’s. Now, that same mother’s intuition which made me question her pediatrician before consenting to the Gardasil injections tells me that my child has been devastatingly injured by Gardasil.

Today, my brilliant daughter has bouts of brain fog and she can’t piece together thoughts.
My green belt daughter wears a transfer belt around her waist as I transfer her to her wheelchair. My social butterfly daughter treasures the few friends who have remained at her side through this nightmare. My independent young woman cries as she allows her mom to wash her hair and help her in and out of the shower, where she sits on a plastic chair. My once-invincible daughter asks me if she’s going to die.

For a long time, I was silent about the Gardasil connection to my child’s injury.  I will not remain silent any longer. I don’t care if people consider me “one of those crazy anti-vax people.”  I am this child’s mother and the vilest injustice has been perpetrated against her.

We will continue to hope that the next treatment will recover my brilliant, active, healthy daughter.

In the meantime, I remain grateful that I still have her to fight for when so many other mothers have lost their children to this tragedy.  I will continue to tell Caitlin’s story.

Our children are not coincidences. This is personal.

This post appeared first at Sane Vax, where you can learn more facts and statistics on the other side of vaccines. Join them on Facebook!