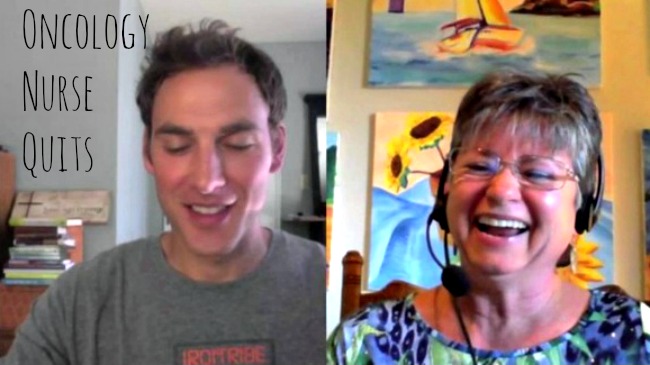 Valerie Warwick spent 17 years as an oncology nurse and has recently made a major life change, quitting her job, and beginning her new mission of helping people to understand the link between nutrition and surviving cancer.

What would possess an oncology nurse to give up a lucrative career as a cancer nurse to speak out publicly on behalf of nutrition and natural medicines to cure this modern plague?

During her youth, her father had throat cancer and her mother suffered terribly from multiple sclerosis, and at 20 years old she was caring for both of her parents. In those days cancer treatments were very invasive and after her father had much of his neck and throat cut away to ‘heal’ him, he died leaving a lasting impression on Valerie. With a long family history of nursing, she decided that since she was still caring for her mother, she might as well become a nurse herself, and began her medical studies.

After finding a permanent position in an oncology ward, she quickly began to question the methods being used, but justified what she was witnessing by telling herself that this was the cutting edge of cancer care and that after time better methods would be discovered and implemented.

How can you be giving poisons to people and expect them to heal? – Valerie Warwick Click to Tweet

In 2008 her best friend was diagnosed with stage 4 colon cancer, which was devastating, and Valerie knew that any treatment offered by her doctors would not cure her, but would instead cause her to suffer horribly. Just as many concerned people do when a loved one is facing this end, looking for any answer, she began researching everything she could find about alternative therapies, treatments, nutrition, and natural cures.

She discovered that diet may be more critical to health than the medical establishment had acknowledged, and began a personal transformation to improve her own health. She quickly realized the impact of diet in her own life; although, sadly she was unable to provide guidance for her friend who died a year and a half later after suffering through the horrifying conventional treatments of colon surgery, cutting out half of her liver, radiation and chemotherapy.

Thus began a serious paradigm shift in her understanding of how to survive cancer. As she started to hear more stories of people’s success with alternative therapies, she started to look at patients differently, and what she discovered that what

most patients really need, first and foremost, is better nutrition. She says that many cancer patients were so nutritionally depleted that they were literally starving to death, and that their bodies have nothing to work with in order to heal.

Additionally, she realized that their immune systems were being destroyed by conventional treatments, in a double-whammy that guarantees that most cancer patients will not survive.

She tells her story in this timely and important interview with Chris Wark, a cancer survivor who is on a crusade to share his story of survival with the world. Chris’ journey is also unique. After having been diagnosed with stage 3 colon cancer at the age of 26, he committed himself to finding a natural cure without using chemo, radiation or surgery to heal himself, and is alive and healthy still today. He started the website, ChrisBeatCancer.com to share his story and help people understand the huge amounts of information on alternative cancer therapies.

In the interview, Valerie shares the wealth of her experiences in treating cancer, and talks about why cancer doctors are not allowed to discuss alternative treatments with their patients. She also discusses the impact of stress on cancer patients, how doctors profit from chemotherapy, and even takes a look at the potential of cannabis oil in treating many different types of cancers.

Please share this important story with anyone you know who is suffering from cancer or who is helping someone else become a cancer survivor.

Here is a timeline of the topics discussed in this interview:

9:26 What cancer patients need to know before agreeing to conventional treatment
13:35 The nutritional advice cancer patients get from doctors
14:47 The critical importance of vitamin C for cancer patients
23:00 How doctors profit off of chemotherapy
24:44 Why Doctors are not allowed to offer any other therapies
29:23 Why she finally left oncology
30:11 What she learned after working in several alternative clinics
31:31 The benefits of Oxygen, Ozone Therapy and EWOT
36:00 The impact that stress has on the immune system
38:00 Essential tests every cancer patient should have
40:00 What every newly diagnosed patient needs to know
43:00 Cannabis oil Natural Blaze editor note: as you can see from the video interview, it’s a common misconception among natural health advocates that synthetic vitamins won’t work on an ill person. Even though synthetic vitamins definitely have drawbacks – the human body is so amazing, that it will readily receive and react to them as this nurse confirms. That is something to celebrate!

This article was originally published December 2014 with permission. ©2015 Waking Times, all rights reserved. For permission to re-print this article contact [email protected], or the respective author.

Alex Pietrowski is an artist and writer concerned with preserving good health and the basic freedom to enjoy a healthy lifestyle. He is a staff writer for WakingTimes.com, where this first appeared, and an avid student of Yoga and life.