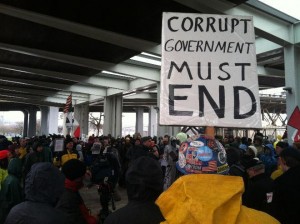 A House of Representatives Bill, short titled “Vaccinate All Children Act of 2015,” has been referred to the Subcommittee on Health and is awaiting committee action.

HR 2232 was introduced by Frederica Wilson, Democrat from Florida and is largely modeled on the California student vaccination act, which was signed into law by Governor Jerry Brown in June of this year.

This Act would override any state law governing vaccine exemptions, making it mandatory for all students at public elementary and secondary schools to be vaccinated. The bill would amend the Public Health Services Act to require students “to be vaccinated in accordance with the recommendations of the Advisory Committee on Immunization Practices.” (ACIP)

The bill does not, however, reveal which vaccinations would be mandatory nor does it place a cap on vaccinations.

The above cited Advisory Committee, which will be making the decisions concerning which shots are mandatory, is stacked with pro-vaccination heavyweights. Notable committee members include a Dr. Kelly Moore, Director, Tennessee Immunization Program, Dr. Edward Belongia, Director, Center for Clinical Epidemiology & Population Health at the Marshfield Clinic Research Foundation and Dr. Kathleen Harriman, Chief, Vaccine Preventable Disease Epidemiology Section with the California Department of Public Health, to name a few. Also sitting on the Committee as Ex Officio members are Department of Defense (DoD) officials as well as FDA officials and members of the Department of Veterans Affairs, among representatives from other federal agencies.

A close scrutiny of this Advisory Committee reveals that quite a number of its members are enriching themselves through vaccine industry “donations” or grants.

For example, some of these individuals have a history which includes industry sponsorship or employment. An example is Dr. Belongia, who has been listed as Co-Principal Investigator for an industry sponsored study of effectiveness of quadrivalent influenza vaccine in children.

According to Propublica, a number of these vaccine experts on the Advisory Committee are accepting large sums of vaccine company money. Dr. Gregory Poland, who is with the American College of Physicians and also the Mayo Clinic, has received a total of $17,351.00 from vaccine manufacturers Novartis Vaccines and Sanofi Pasteur. The money changed hands, according to Propublica, for activities by Dr. Poland listed as promotional speaking, consulting and travel and food expenses from November 2013 through December 2014.

Dr. Stanley Grogg, a “Liaison Member” of the Committee and with American Osteopathic Association (AOA), was rewarded for his “promotional speaking” activities, as well as “consulting,” “travel and lodging” and of course the ubiquitous “food and beverage” — to the tune of $60,391.00. These payments were made during the period of August 2013 through December 2014 and came from a buffet of pharmaceutical companies, including Pfizer, Sanofi, Novartis Vaccines and GlaxoSmithKline, among others.

Dr. Kenneth Schmader is listed as a “Liaison Member” of the ACIP, due to his position with the American Geriatrics Society (AGS). He is a Professor of Medicine-Geriatrics and Geriatrics Division Chief at Duke University and Durham VA Medical Centers in Durham, NC. Dr. Schmader received $75,913.79 for research, paid by Merck, Sharp and Dohme Corporation during the program year 2014.

Dr. Carol Baker, a “Liaison member” and with Infectious Diseases Society of America (IDSA) , also works as a Professor of Pediatrics with the Baylor College of Medicine in Houston, Texas. Dr. Baker was also found to have received $37,514.00 from August 2013-December 2014 for speaking, consulting, lodging and eating. The usual suspects pop up as the vaccine manufacturers who contributed to Dr. Baker—Novartis and Pfizer making the majority of the contributions.

Not to be left in the dust, Dr. William Schaffner, a “Liaison Member” from the National Foundation for Infectious Diseases (NFID) and the Chairman, Department of Preventive Medicine, Vanderbilt University School of Medicine, received a total payment of $26,208 in the two year period from Pfizer and Sanofi Pasteur. The total paid Dr. Schaffner for travel and lodging came to $13,653.00.

Committee member Dr. Ruth Karron, who is listed as Professor and Director at the Center for Immunization Research, Department of International Health at Johns Hopkins Bloomberg School of Public Health in Baltimore, received $ $7,173 from GlaxoSmithKline for consulting from April-December, 2009, while Dr. Lee Harrison of Pittsburgh was paid a total of $27,663.00 by Glaxo and Pfizer, from 2009-2012.

Besides direct payments to pro- vaccine committee members from the pharmaceutical companies, there are other revenue streams gracing ACIP committee members. While this reporter did not find evidence that Advisory Committee member Dr. Arthur Reingold had received the above types of monies from Big Pharma, his name surfaced in connection with an effort to shut down a Professor whose work challenged the conventional wisdom that AIDS was mortally impacting large numbers of Africans. Reingold was assigned to “investigate” professor Peter Duesberg for “misconduct,” surrounding Duesberg’s findings that figures on AIDS deaths in Africa had been deliberately inflated.

As it turned out, Dr. Arthur Reingold had received over $37 million for AIDS research since 1988. Professor Duesberg was subsequently exonerated of the charges.

Dr. David Stephens, a voting member of the Committee, also did not show up on the Propublica list of doctors who took money from pharmaceutical companies. Stephens, whose bio states he has “led research initiatives in the School of Medicine” (at Emory University), is responsible for Emory researchers receiving “$521.8 million from eternal funding agencies in fiscal year 2014.”

Stephens also hobnobs with the Vaccine Dinner Club, which exists to “advance the practice of vaccine science by stimulating the intellectual potential and research productivity of the vaccine research community in the Southeast…”

Dinners and membership in the club are free, sponsored by Emory University and other organizations. I guess with a half billion dollars knocking around in your pocket, a free lunch for your fellow scientists wouldn’t be much of an issue.

Stephens also sits on the Board of Directors for Georgia Bio, a non-profit organization dedicated to advancing the growth of Georgia’s life sciences industry. Also represented on the Georgia Bio Board are vaccine manufacturers and pharmaceutical companies: Johnson and Johnson, Geovax, Arbor Pharmaceuticals, Immucor, Osmotica Pharmaceutical Company and Femasys.

Georgia Bio was contacted by this reporter, who wished to query what, if any,

compensation Stephens received for his service on the Board. Jennifer Kauffman, Development Director, promptly hung up rather than answer.

Should HR 2232 be approved by the US Congress, it is this Advisory Committee which will decide which vaccinations American children must receive. The clear conflict of interest inherent in Committee members padding their wallets with money from the pharmaceutical industry realistically should disqualify the members from making these critical decisions.

These conflicts of interest are not new for the ACIP. As reported over fifteen years ago by the National Vaccine Information Center, previous conflicts of interest ranged from the ACIP chairman owning stock in vaccine giant Merck, to other financial ties between committee members and vaccine companies. In addition, the National Vaccine Information Center reported that the mandated financial disclosures filed by committee members were incomplete, rendering a full accounting of their financial relationships with pharmaceutical companies difficult, if not impossible.

Regarding the compensation paid by the CDC to ACIP members, CDC reports that;“Appointments are not remunerated. However, members are compensated for expenses incurred by attendance at meetings. Such compensation, which includes the issuance of airline tickets, per diem to cover lodging, meals and incidental expenses will be in accordance with DHHS/CDC travel rules. An optional honorarium of $250/day for each day that a member attends an ACIP meeting is offered to voting members, who are designated as Special Government Employees during their tenure on the Committee.”

Radio show host (Wise Women Media) Anita Stewart contributed research to this report. This reporter requested that Stewart contact the CDC to query what sort of compensation the ACIP members received, as the CDC will no longer respond to public records or media requests from this reporter. This blacklisting took place following the publication of an article in Activist Post, indicating that the CDC was deflating the numbers of biological weapons labs.

Stewart, who located the above information on ACIP compensation online, was questioned by CDC media officer Sonny Dill, who kept insisting that Stewart was I. Dill also wanted to know who Stewart worked for, stating this information was necessary before answering any questions. Stewart, who was forthcoming in response, reports that Dill declined to supply the information requested.

Janet C. Phelan, investigative journalist and human rights defender that has traveled pretty extensively over the Asian region, an author of a tell-all book EXILE, exclusively for the online magazine “New Eastern Outlook”.