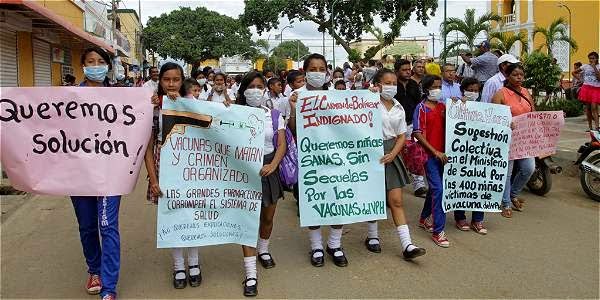 Colombia: There are already more than 243 cases of girls in Carmen de Bolivar reporting symptoms of fainting, shortness of breath and weakness in the limbs. What do these girls have in common? All received Gardasil, a vaccine that supposedly helps prevent cervical cancer, which they say may be caused by the human papillomavirus.

The government emphatically denies that the vaccine is causing these symptoms. However, parents of girls affected disagree.

For the first time in the history of Colombia, and perhaps the world, there is a massive protest because of a vaccine that is apparently making people sick instead of protecting them.

Some family members have staged peaceful protest marches to demand immediate investigations; others burned tires in protest and blocked a main road that connects a coastal town of Colombia with the interior of the country.

As reported by the Colombian newspaper El Tiempo, one of the parents, Hector Pineda, said:

It is not possible for the Health Minister to say that the vaccine that was used has nothing to do with the strange symptoms experienced by our daughters. We were all expecting an answer to so many questions that we have; the Minister tried to tone down the facts, suggesting that some people were taking advantage of the system and even that there were girls who were not vaccinated and had the same symptoms.

The head of toxicology at Saint Joseph Hospital Bogotá, Dr. Camilo Uribe, where some of the girls were treated, has publicly stated that the symptoms are “bizarre” and there are things that are still not understood in the case, but that definitely the girls’ illnesses are not caused by the vaccine!

The question is, if there are ‘things that are still not understood,’ how can any doctor categorically state the symptoms are not associated with the vaccine?

What’s more, the symptoms experienced by many girls are identical to those of a patient that Dr. Uribe personally treated: muscle weakness, shortness of breath, joint pain, etc., and blood tests indicating a high level of aluminum. All these symptoms appeared after the third Gardasil shot. After a detoxification treatment, this patient showed improvement.

Every disease in the world has a set of symptoms (diagnostic criteria) doctors use to determine what illness is being exhibited in their patients. Is there no diagnostic criteria established for suspected adverse reactions to vaccines?

Why is it that the head of toxicology at St. Joseph Hospital cannot explain why so many girls are suffering similar symptoms when the only major change in all of their lives is recent Gardasil injections? How can he be so sure the symptoms are not associated with the vaccine?

Parents are angry, and rightly so. Their daughters became ill after vaccination and the government claims the symptoms of the girls are not associated with the vaccine. The government says that perhaps these symptoms are caused by unexplained environmental causes, psychological problems, or by playing with Ouija boards!

This tragedy in Colombia was fully preventable and no surprise. Congress approved a law by which the vaccine would be “free and compulsory”. Congress did not know the consequences of the law it was sanctioning since it never investigated whether or not this vaccine had any side effects, as it clearly does.

Now the Minister and Deputy Minister of Health say, without any scientific basis, that since there haven’t been any studies the adverse reactions of the girls in Carmen de Bolivar are not linked to the vaccine. Through the art of sophistry and misdirection they have made the following statements to the mass media:

Here are the facts:

The vaccine contains an adjuvant, aluminum, which can cause serious neurological problems if not eliminated by the body within 48 hours of application of the vaccine.

The medical experts I have consulted in the United States, including the researcher Lloyd Phillips, have said that this vaccine was made for people with a perfect immune system (which does not exist) and that any genetic variation can cause the aluminum in the vaccine to be impossible to remove from the body, which may then cause autoimmune disease.

In the case of the girls in Carmen de Bolivar, the Ministry of Health is diverting attention from the vaccine and instead is looking for environmental causes for these girls’ symptoms, such as lead poisoning, when in fact they should be looking for the presence of aluminum from the vaccine is contained in the blood.

In my opinion, this is a nothing more than a smoke screen, an attempt to prevent the discovery of the relationship between symptoms and the Gardasil vaccine.

It has been reported that a group of specialists sent to Carmen de Bolivar is now evaluating ‘food and how it is cooked’ in the three schools that have the highest number of cases, as well as in the homes of the children to see if there is a causal relationship to the symptoms, which according to them are explained by lead poisoning. They completely ignore that in Colombia most people cook their food in aluminum pots, which is highly detrimental to health and a hazardous combination if girls are also being injected with aluminum.

If the specialists decide a priori that the vaccine is NOT the cause of the symptoms, which seems to be what is happening, what we are facing is the concealment of a health hazard that is disguised as a vaccine.

The negative effects of the vaccine are not limited to the town of Carmen de Bolívar. They have been presented in several other cities in Colombia such as Medellin, Cali, Sincelejo, Bogotá, Codazzi, and Valledupar, among others.

In Colombia, there has already been one case reported of another possible side effect of Gardasil that is being researched: sterility.

There have been cases of girls who have experienced ovarian failure after the application of the vaccine, which means that they have been left menopausal at 20 years of age. In Spain there are two cases. In the United States there is a specialized group that has compiled information about the deaths due to the side effects of the HPV vaccine.

Is Health Minister, Alejandro Gaviria, being less than truthful, very misinformed, or simply protecting the big interests behind the vaccine when he stated the following to reporters, referring to Gardasil:

There have been nearly 170 million doses administered worldwide without any health risk.

He ignores the fact that there are victims who have died after Gardasil administration in other countries; that the United States is paying money to Gardasil victims who have won their case in the Vaccine Injury Court; that the vaccine has been rejected in Japan, withdrawn in India and that legal actions have been filed in Spain against the manufacturer Merck and the Health Ministry of that country.

The Colombian Ministry of Health has NOT conducted ​​any scientific studies about the vaccine; it only repeats that the vaccine is safe because the World Health Organization has said so.

In short, health officials seem to be ignoring all the empirical and scientific evidence. Are they being dishonest or simply misinformed when they state that there are no health risks? Do they forget that even the manufacturer Merck has warned of certain risks?

In Colombia, all the international studies that have found that adverse reactions to Gardasil can kill or leave a person disabled are being ignored. Not all girls have the same reactions to the vaccine. In the specific case of Gardasil, genetic variations of individuals may play a very important role. Perhaps, in the case of Carmen de Bolivar, the vaccine was given to a genetic group especially susceptible to the vaccine. It is unfortunate the Colombian “experts” are not even contemplating this possibility.

The Ministry of Health continues to proclaim in their statements to the press that the vaccine is completely safe, seemingly relying on an almost religious faith in certain authorities and towing the line of the higher powers of the multinational pharmaceutical industry instead of using scientific reasoning.

Indeed, it would be very difficult for the Colombian government to publicly admit they may have made a mistake. Neglecting to perform thorough investigations of the matter is compounding that error by committing a crime against the health of Colombian girls and young women.

We are talking about a vaccine that can kill, leave girls with permanent physical injuries and also cause sterility.

We must demand that the Colombian government immediately suspend the application of this vaccine, because the more “successful” the government is applying it, the more victims appear.

And, worst of all, as expressed by the mother of one of the girl victims in Carmen de Bolivar, her daughter came home vaccinated and sick.

Neither the parents nor the girl were asked for consent before administering the vaccine to her and to her fellow students. They were simply vaccinated, like animals.

Read this article in Spanish here

Photo Credit: Picture published by the Colombian Daily Newspaper El Tiempo, on September 3, 2014. Signs say: “We want a solution”, “Vaccines that kill and organized crime”, “We want healthy girls without the side effects of the vaccines of the HPV”, and finally, “Mass suggestion but in the Ministry of Health because of the 400 girls, victims of the vaccine.”