The doctor of the future will give no medicine, but will interest her or his patients in the care of the human frame, in a proper diet, and in the cause and prevention of disease. ~ Thomas Edison

A remarkable new study published in the Journal of Nutritional Biochemistry reveals the immense value of the ancient spice turmeric in the treatment of type 2 diabetes, and the reversal of pathological states linked to its most deadly complication: atherosclerotic heart disease.

The new study titled, “Reduction of atherogenic risk in patients with type 2 diabetes by curcuminoid extract: a randomized controlled trial,”[i] dovetails nicely with a 2012 study published in the American Diabetes Association’s own journal, Diabetes Care, which found turmeric 100% effective in preventing the development of type 2 diabetes in prediabetics over the course of a six month intervention with curcumin.[1]

In the new study, researchers from Thailand conducted a 6-month randomized, double-blinded and placebo-controlled clinical trial comprised of 226 subjects diagnosed with type 2 diabetes (mean duration of the disease ~ 6 years), equally divided into a treatment (113) and placebo group (113).  They aimed to explore the role that the golden-hued polyphenol found in turmeric known as curcumin might play in preventing atherosclerosis, by measuring its effects on the following parameters of atherogenic risk:

All participants were instructed to take three capsules with blinded labels of eithercurcumin or placebo twice a day (total of six capsules per day) for 6 months continuously. Each curcumin capsule has curcuminoid content of 250 mg. Each placebo capsule contains 250 mg of starch. Patients were asked to bring all capsules back when having follow-up visits at 3 and 6 months for assessing their compliance.

The researchers monitored adverse effects during the study period by tracking changes in body weight, blood pressure (systolic/diastolic blood pressure), kidney function (creatinine) and liver functions (AST and ALT), but found no indication of adverse changes in the curcumin group. In fact, ALT was actually lower in the curcumin group, indicating it may have improved liver function – an unsurprising finding considering, given turmeric’s well-known liver healing properties. They also noticed at the last follow-up visit (6 months after intervention) improvements in other metabolic parameters:

[W]e noticed slight reductions of mean body weight, BMI, WC [weight circumference] lipid profiles (total cholesterol, LDL-C) and blood glucose profiles (FPG and HbA1c) and a slight increase of HDL-C from the group of patients treated with curcumin. We did not see such patterns from the placebo-treated group (Online Supplemental Material in Table 2). All together, these results indicated that curcumin extract can be used for intervention, at least for a period of 6 months, without any serious unwanted effect.

In other words, the intervention not only did not have any discernable adverse side effects, but it appeared to have lasting side benefits beyond the study’s main parameters.

The primary parameter used in the study to assess the risk of atherosclerosis was pulse wave velocity, an indication of arterial stiffness and endothelial dysfunction, i.e. the inability of the arteries to dilate sufficiently.  Secondary parameters used to assess increased risk of atherosclerosis included insulin resistance, dyslipidemia (high triglycerides), abdominal obesity (visceral fat and total body fat), uric acid levels, and anti-inflammatory cytokine levels (adiponectin and leptin). Curcumin was found to improve every one of these parameters, as documented by the figures below: 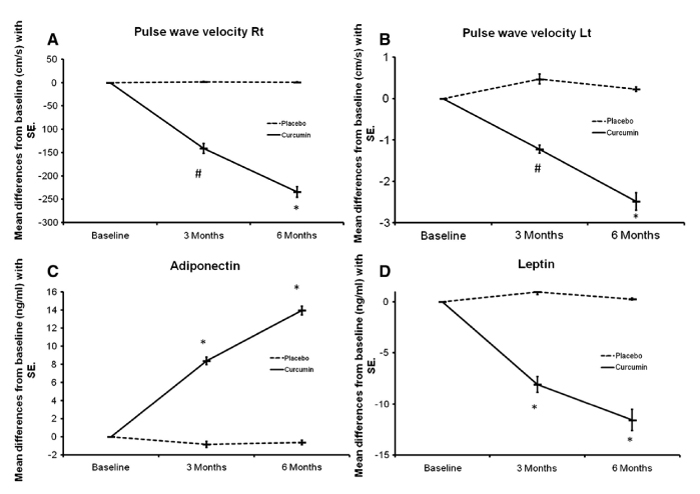 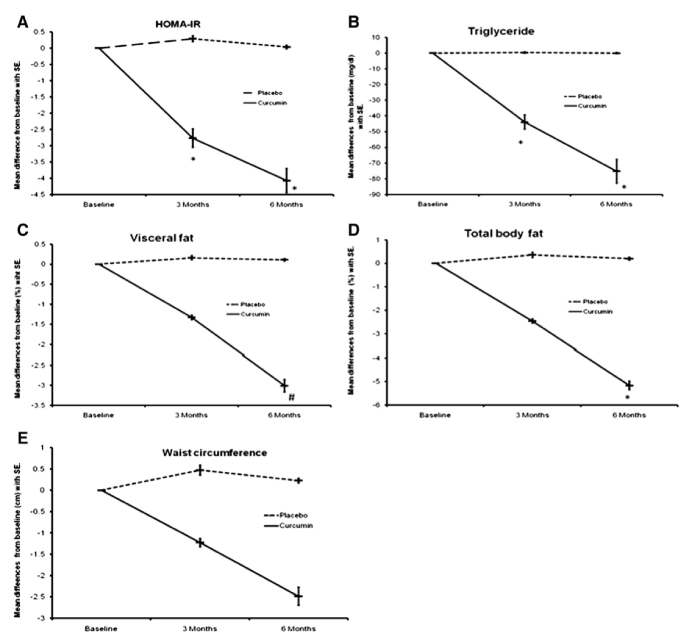 Fig. 2. Mean differences from baseline to 3- and 6-month visits with SEM for HOMA-IR, triglyceride, VF, TBF and WC for the placebo and the control groups. Statistical significances are indicated as follows: #P=.01, *Pb.001. Statistical tests were performed for the comparisons of end point at each visit between the two groups. Differences of means between the curcumin and placebo groups at 3- and 6-month visits were statistically significant at Pb.01 for HOMA-IR (A) and triglyceride (B), while VF (C) and TBF (D) showed statistically significant only at 6-month visit.

Finally, curcumin treatment appeared to lower fasting plasma glucose (FPG), glycated red blood cells (HbA1c), total cholesterol and LDL-C and to slightly raise HDL-C, with the qualification that, “these results did not yet meet the level of statistical requirement.”

The authors summarized their findings: “[I]n our observation, we found beneficial effects of a 6- month treatment of curcumin on antiatherogenic risks in type 2 diabetes population. We also demonstrated that 6-months curcumin intervention was well tolerated, with a very few adverse effects.”

Their conclusion was stated as follows: “Because of its benefits and safety, we propose that curcumin extract may be used as anti-arteriosclerosis in type 2 diabetes population.”

Considering the potentially life-threatening side effects of conventional medications for type 2 diabetes, the discovery that turmeric extract can prevent the progression of, and even reverse, a wide range of pathologies associated with this condition, is extremely encouraging.  In fact, another resent study published in the American Journal of Cardiology found Turmeric’s Cardiovascular Benefits May Be As Powerful As Exercise, adding additional support to the study’s findings.

With such a highly compelling body of clinical research on turmeric now pointing to the therapeutic potential of this safe, effective, affordable, time-tested and easily accessible spice, the future of diabetes care appears no further than the spice rack.