Do pharmaceutical companies believe in their product?

They believe in money and power – they answer only to their stock holders. If they believed in their products, they wouldn’t require legal protection from their product harming children through Public Law 99-660 (the National Childhood Vaccine Injury Act of 1986). Furthermore, they wouldn’t need to force parents to vaccinate their child through mandates (that’s why you need an exemption).

I preface this article with the following, because Big Pharma and the pro-vaccine lobby know their ship is sinking. Parents are investigating vaccines and asking doctors questions they cannot answer in record numbers, which is shooting holes in Pharma’s bottom line.

How do you plug up these holes to stop the ship from sinking? The answer is quite simple: copy what parents are doing in the anti-vaccine movement.

Perhaps you have seen the recent story hosted on the website Voices for Vaccines entitled, Growing Up Unvaccinated?

As you can probably guess from the title, it is a story of a mother who grew up unvaccinated. The woman in the story changed her mind in adulthood and decided vaccines were really beneficial to her health. [1] While this mother converted to the religion of vaccinology made headlines, there is an even bigger story underneath the surface if you just scratch at it a little.

If you haven’t guessed by now, it has to do with the relationship between the Voices for Vaccines website and the pharmaceutical industry.

The website is a marketing scheme for pro-vaccine interests, no matter how much money or artificial it is. You need to know who owns the website and understand the question, “Who influences the Voices for Vaccines website?” or, put in a different way, “Who benefits?”

You should know that the Voices for Vaccines website is owned by the Task Force for Global Health, the third largest charity in the United States. Voices for Vaccines claims that it is “a parent-led organization that supports and advocates for on-time vaccination and the reduction of vaccine-preventable disease.” [2]

While the administrators of the website are noted as being two mothers, the energy, as we shall see, is channeled by larger forces. 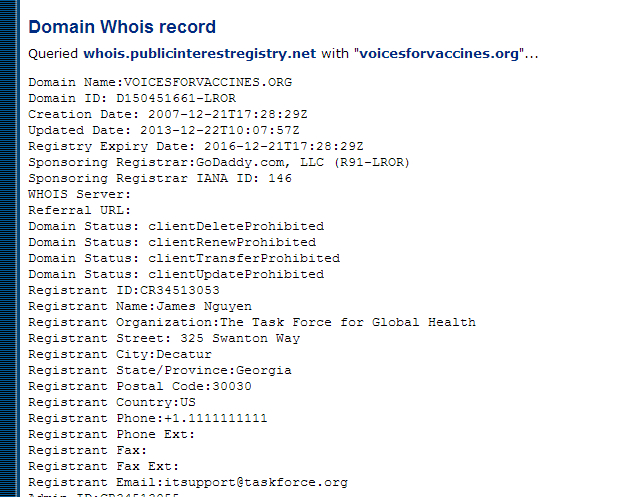 Fact #2: Task Force is the Third Largest Charity in US

The third largest charity in the United States brings home $1.66 billion a year, according to Forbes. [3] Yet, if you’re not from the Atlanta, Georgia, area, chances are you probably haven’t heard of the Task Force for Global Health.

This fact alone should tell you there is big money involved; you’ll see where the funds come from.

Now that you know the Task Force for Global Health owns the website, it’s time to step into the deeper end of the pool.

Before I show you who is influencing the website, you must know Task Force employees are actually working for Emory University. The situation is a bit more complex when you look at the Task Force’s IRS Tax Form 990.

We’ll come back to this important point in a bit, as you’ll see most of their leadership and members have some affiliation with Emory (and also the Centers for Disease Control).

We haven’t discussed the Centers for Disease Control connection yet, but we will.

Let’s take a look at how closely the following three organizations are connected to each other.

According to Google Maps, the Task Force for Global Health is located 2.6 miles from Emory University, and the Centers for Disease Control are located on essentially the same campus.
By itself, the proximity of all of the organizations means little. But there’s more to the story.

You’ll notice an intimate relationship between Emory University and the Centers for Disease Control. To understand who is controlling the energy for Voices for Vaccines, and the Task Force organization at large, you need to understand their relationships and affiliations. It’s enough to make your head spin, so that is why at the end of this article I am providing a mind map graphic to make this a bit easier for you.

Here is an example of what I mean.

Alan Hinman is the director for various positions within the Task Force, including his leadership role for the Voices for Vaccines website. The IRS Form 990 for 2011 states he was paid $188,453 for his work. While the program Voices for Vaccines may not accept funding from pharmaceutical companies or government grants, he has his fingers in other pots that do.

Lastly, Scientific Advisory Member Stanley Plotkin. He is well-accomplished within the vaccine community, so here are just a few salient items about him:

Fact #6: Task Force Board of Directors Have Relationship to CDC / Emory University

You should know that the Voices for Vaccines website falls underneath the Task Force “umbrella.”
This means that obviously Director Alan Hinman takes his marching orders from a higher authority.
Even if there are a few members who are on the Emory payroll, it is important to see the relationship between Emory and the CDC with the other board members as well.

On the graphic below, the “red star” icon next to the name mean there is an association to Emory University. A “blue person” icon indicates a relationship to the Centers for Disease Control.

Emeritus Members of Board of Directors

Looking at how The Task Force for Global Health was started is also important. According to their web page, they were, “initially tapped to serve as a Secretariat for a consortium of global health organizations: UNICEF, WHO, The Rockefeller Foundation, The United Nations Development Programme, and the World Bank.” [25]

Understanding the motives of the Rockefeller family, as an example, is perhaps the best understood by author and researcher Lily E. Kay. She writes about the Rockefeller philosophy extensively in her book, The Molecular Vision of Life.

On page eight, she explains, “The motivation behind the enormous investment in the new (“Science of Man”) agenda was to develop the human sciences as a comprehensive explanatory and applied framework for social control grounded in the natural, medical, and social sciences.” (notation mine)
“Applied social control”, simply stated, is the misuse of any branch of commerce, science, law, politics, or religion for compliance to an ulterior motive held by those in power.

Lily Kay continues to elaborate, “With that agenda, the new biology (originally named “psychobiology”) was erected on the bedrock of the physical sciences in order to rigorously explain and eventually control the fundamental mechanisms governing human behavior, placing a particularly strong emphasis on heredity.”

The “heredity” that Lily Kay speaks of is a concept known as eugenics, or better known in today’s age as genetics. [26]

If you look into this company further, you will see the complex set of relationships between Emory University, the CDC, and pharmaceuticals. Dr. Harriet Robinson, co-founder of GeoVax, developed AIDS vaccine technology in her laboratory with researchers from the Centers for Disease Control during her time at Emory University. [28]

As a side note, Big Pharma payouts to Emory University are not a secret.

Emory University and some of their employees receive hundreds of thousands of dollars from pharmaceutical companies. [29] This certainly does not make their stance regarding vaccines a philosophical one. Theirs is backed with dollars.

Go to ProPublica’s Docs for Dollars program and do a search for “Emory University.”

Programs for The Task Force for Global Health is also heavily funded by pharmaceutical companies. [30]

Fact #11: Task Force has Partnered with Merck for Over 25 Years

There is an old axiom that nothing in life is for free.

Merck has partnered with the Task Force for Global Health for over 25 years. Through the Mectizan Donation Program, they have donated free pharmaceuticals to eliminate river blindness in third world countries, like Uganda. [32]

Could it be possible Merck uses this “good will” in exchange for peddling their dangerous vaccines for experimental vaccine trials? As an example, in 2012 Merck announced a national Gardasil vaccination program in the Republic of Uganda. [33]

Additionally, in 2013 Merck has launched the Merck for Ugandan Mothers program, spending $500 million dollars to build their medical infrastructure, such as “enhancing” the role of local pharmacies. [34]

The Voices for Vaccines program at the Task Force for Global Health may be administered by a few mothers, but they are not the ones pulling the strings behind the scenes. The information in this article reveals who keeps the lights on for the website and the Task Force organization as a whole.

Furthermore, the past, present and future relationships with the Centers for Disease Control, Emory University, and pharmaceutical companies should immediately raise a red flag for any parent.
Especially when the message calls for you to blindly trust doctors injecting dangerous chemicals into your child.

If you want to take action and become an informed parent, there is something you can do. Click on this link right now and download the vaccine ingredients.

As you can see, there are many other relationships not covered in this article. If you would like to investigate the relationships between the people mentioned in this story, you may do so through the mind map graphics below. Map of relationships for the Task Force for Global Health. Click on the graphic to see larger version. Funding summary of who funds which programs. Click on the graphic to see a larger version.