‘Safe’ levels of environmental pollution may have long-term health consequences 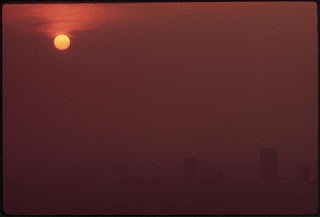 Bethesda, MD—If you’re eating better and exercising regularly, but still aren’t seeing improvements in your health, there might be a reason: pollution. According to a new research report published in the September issue of The FASEB Journal, what you are eating and doing may not be the problem, but what’s in what you are eating could be the culprit.

“This study adds evidences for rethinking the way of addressing risk assessment especially when considering that the human population is widely exposed to low levels of thousands of chemicals, and that the health impact of realistic mixtures of pollutants will have to be tested as well,” said Brigitte Le Magueresse-Battistoni, a researcher involved in the work from the French National Institute of Health and Medical Research (INSERM). “Indeed, one pollutant could have a different effect when in mixture with other pollutants. Thus, our study may have strong implications in terms of recommendations for food security. Our data also bring new light to the understanding of the impact of environmental food contaminants in the development of metabolic diseases.”

To make this discovery, scientists used two groups of obese mice. Both were fed a high-fat, high-sucrose enriched diet, with one group receiving a cocktail of pollutants added to its diet at a very low dosage. These pollutants were given to the mice throughout—from pre-conception to adulthood.

Although the researchers did not observe toxicity or excess of weight gain in the group having received the cocktail of pollutants, they did see a deterioration of glucose tolerance in females, suggesting a defect in insulin signaling. Study results suggest that the mixture of pollutants reduced estrogen activity in the liver through enhancing an enzyme in charge of estrogen elimination. In contrast to females, glucose tolerance was not impacted in males exposed to the cocktail of pollutants. However, males did show some changes in liver related to cholesterol synthesis and transport. This study fuels the concept that pollutants may contribute to the current prevalence of chronic diseases including metabolic diseases and diabetes.

“This report that confirms something we’ve known for a long time: pollution is bad for us,” said Gerald Weissmann, M.D., Editor-in-Chief of The FASEB Journal. “But, what’s equally important, it shows that evaluating food contaminants and pollutants on an individual basis may be too simplistic. We can see that when “safe” levels of contaminants and pollutants act together, they have significant impact on public health.”

Receive monthly highlights from The FASEB Journal by e-mail. Sign up at http://www.faseb.org/fjupdate.aspx. The FASEB Journal is published by the Federation of the American Societies for Experimental Biology (FASEB). It is among the most cited biology journals worldwide according to the Institute for Scientific Information and has been recognized by the Special Libraries Association as one of the top 100 most influential biomedical journals of the past century.

FASEB is composed of 27 societies with more than 110,000 members, making it the largest coalition of biomedical research associations in the United States. Our mission is to advance health and welfare by promoting progress and education in biological and biomedical sciences through service to our member societies and collaborative advocacy.